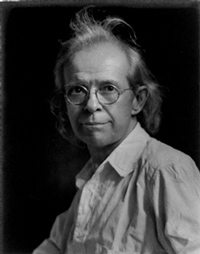 Joseph Woodson “Pops” Whitesell (February 11, 1876 – February 18, 1958) was a universally popular figure among his neighbors in the French Quarter, high society clientele, celebrities from the world of arts and letters, and fellow photographers. Among his famous portrait subjects; Wayman Adams, Sherwood Anderson, Sinclair Lewis, Lyle Saxon, Erle Stanley Gardner (who put Pops in two of his novels as “Gramps Wiggins”). His fame led to a one man exhibition at Smithsonian Institution of 58 of his photographs in 1946. Pops never married.

Joseph Woodson “Pops” Whitesell was born in Libertyville, Indiana, on February 11, 1876, the son of Simon Bruce Whitesell (1853-1923) and Alice Chunn (1855-1936). He moved to New Orleans in 1918 and made the city his permanent home. Whitesell’s photography achieved international recognition in professional salon exhibitions. In 1947, he was the ninth most exhibited salon photographer in the world. His studio at 726 St. Peter Street, in the outbuilding behind what would become Preservation Hall, was always alive with visitors, conversation, and photographic activities.

After establishing his French Quarter studio in 1921, Whitesell enjoyed a successful practice concentrating on portraiture. His sitters included debutantes, Mardi Gras royalty, and wedding parties. Whitesell was not only adept in the lighting of a single portrait subject or character study, he was also acclaimed for staging and effectively lighting groups of eight people or more within the confines of the studio. It is for such efforts that his work was exhibited throughout the world, and acquired by museums, such as Washington, D.C.’s Smithsonian Institution, for permanent collections. Whitesell’s peer recognition was underscored by his memberships in the Photographic Society of America (where he was designated a Fellow), the Professional Photographers Association (achieving the pinnacle title Master Photographer), and Great Britain’s Royal Photographic Society. In 1946 the Smithsonian Institution mounted an exhibition of fifty-eight of his prints.

Once his mature style of carefully lit portraiture was established, Whitesell maintained it until his death. Softly focused subjects, richly toned prints, and retouching that flattered his sitters were techniques that he employed even on the streets of the French Quarter. In addition to traditional silver-based prints, Whitesell occasionally produced bromoil transfer prints. The basis for such work always originated with a photograph, but the final product had the appearance of a lithograph or aquatint engraving. His image of the Arsenal, a building adjacent to the Cabildo on St. Peter Street in the French Quarter, is an example of this technique. In the early 1950s, an infection in his leg that went untreated for too long resulted in the limb’s amputation. Though confined to a wheelchair, Whitesell continued to print photographs, but at a much diminished pace. Daniel S. Leyrer — a photographer whose studio and apartment were in the same building as Whitesell’s — along with friends and admirers, assisted and comforted Whitesell until his death on February 18, 1958, a week following his eighty-second birthday. His remains were sent to Indiana for burial. What remained of Whitesell’s negative archive was donated to Tulane University in New Orleans in 1978.