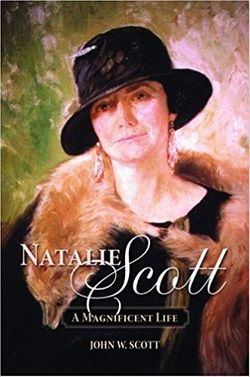 Natalie Scott (July 18, 1890 - November 18, 1957) was a journalist, equestrian (she was a founder of the New Orleans Equestrian Club and perennial city champion), real-estate investor (the famous old Court of Two Sisters was one of her real-estate holdings), Junior Leaguer, social organizer.

Natalie Vivian Scott was born on July 18, 1890 in Bristol, Virginia, to Nathaniel Graves Scott ( 1848–1926 ) and Martha Vivian Fauver ( 1869–1922 ). The family moved to New Orleans, where her father worked as a railroad contractor. Natalie Scott graduated from Newcomb College in 1909, and continued her studies there, earning a Master's degree in 1914, writing her thesis on Zuripidos, Seneca, and Corneille.

During World War I, she served with the Red Cross in a field hospital in France (the only American woman to receive the Croix de Guerre for rescuing wounded soldiers from the rubble of her hospital during a bombing raid), then returned to New Orleans with the intent of becoming a journalist. She wrote a society column for the New Orleans States, as well as news stories about such topics as the murder trial of Andrew J. Whitfield in 1920. She associated with the literary group that centered in the French Quarter. Its more notable members included William Faulkner, Sherwood Anderson, Lyle Saxon and William Spratling.

In 1921 she and John McClure bought a building on Orleans (now Pirate’s) Alley and told a newspaper that they intended to convert it to studios for artists. They lived there themselves, and when Spratling came to town the next year he moved in as well. Subsequently, Scott bought a Creole cottage on St. Peter Street, where her tenants included Oliver La Farge and Sam Gilmore, and the Court of Two Sisters, where a tenant started a tearoom in the ground floor. At another of her properties, on St. Peter, Spratling converted the attic into an apartment where he and Faulkner moved in 1925. Downstairs, Marc and Lucille Antony lived above their ground-floor shop. (Scott made a lot of money when she sold these places; unfortunately, she put much of it in the pre-Crash stock market.)

With Helen Pitkin Schertz and Mrs. James Oscar Nixon, she helped to get Le Petit Theatre established. She wrote and acted in plays there, often with Sam Gilmore, and the two performed skits at the country club and for the Junior League Review. She and Gilmore also worked alongside Flo Field and Lillian Marcus (her former basketball teammate at Newcomb College) as unpaid staff members at the Double Dealer, and Scott supported it with enough of her own money to make her the magazine’s fourth largest investor. Her column for the States often dealt with fluff about the Famous Creoles and their doings, but she also reported such hard news as a sensational murder trial. (In 1929 Sherwood Anderson called her “the best newspaperwoman in America.”) Meigs Frost, her colleague at the States, wrote once that Scott “poured the ‘T’ that puts the finishing touch to ART,” and her efforts for the Arts and Crafts Club included working with Charles Bein and Elizebeth Werlein to arrange the program for one of its annual balls. She sat (or, rather, stood) for a society portrait by Pops Whitesell and, naturally, she was one of the dozen or so Famous Creoles who went on Sherwood Anderson’s hapless Lake Pontchartrain excursion. She also went with Spratling, Caroline Durieux, Virginia Parker, and Charles Bein to hear Frans Blom’s lectures on Mexico at Tulane, a decision that was to have major consequences for her a few years later. She traveled the back roads with Spratling to write their book, Old Plantation Houses in Louisiana, which was praised in Lyle Saxon’s column for the Times-Picayune when it appeared in 1927 (with a preface by N. C. Curtis). Almost incidentally, she wrote Grand Zombi, a “tragic mulatto” drama based on the life of voodoo priestess Marie Laveau, which won a national playwriting contest in 1927, went on to win other prizes, appeared in a “best plays” anthology, and was staged at Le Petit Theatre.

In 1928 she resigned from the States, left the Quarter for a house near Audubon Park, and sold the St. Peter Street cottage to her tenant Sam Gilmore. Although all her previous investment properties had been within a few hundred feet of Jackson Square, she used some of the money to buy two rental houses uptown. Also in 1928, she visited Sherwood Anderson at his new home in Virginia and worked steadily on a cookbook, published the next year as Mirations and Miracles of Mandy, with illustrations by Spratling.

In 1929 she and ten others, including Lyle Saxon, Grace King, Roark Bradford, and Dorothy Dix, were honored at a “New Orleans in Song and Story” banquet, but she and Spratling had already begun to discuss a move to Mexico, and in the fall she went back to explore the country—on horseback. When the stock market crash wiped out most of her savings, she had yet another reason to make the move. She returned to New Orleans long enough to appear in Le Petit Theatre’s production of The Devil’s Disciple, but early in 1930 she joined Spratling in Taxco. She threw herself into the life of the town with her usual gusto, working to preserve its historic architecture, opening a pensione for artists and writers, riding her horses through the wilds of Mexico, pursuing anthropological research on the native peoples, and joining the staff of the magazine Mexican Folkways. She introduced a proper sanitation system for the town and brought in its first physician. Most important, she founded and ran a nursery school that provided education, health care, and nourishing meals for local children. She also continued to write: first The Gourmet’s Guide to New Orleans (foreword by Dorothy Dix); then Your Mexican Kitchen (foreword by Spratling); finally Cocina to You: Mexican Dishes for American Kitchens.

During World War II, Scott rejoined the Red Cross, seeing North Africa, Germany, and the Phillipines, returning later to Mexico and New Orleans. She came back to New Orleans long enough to lead a national fund-raising campaign for Newcomb, but then returned to Taxco, her school, and her friends. She died and was buried there in 1957.