Oscar Fingal O'Flahertie Wills Wilde (16 October 1854 – 30 November 1900) was an Irish poet and playwright. After writing in different forms throughout the 1880s, he became one of London's most popular playwrights in the early 1890s. He is best remembered for his epigrams and plays, his novel The Picture of Dorian Gray, and the circumstances of his imprisonment and early death. Wasted Days (1877) and The Portrait of Mr. W.H. (1889-95) are cited as examples in Sexual Heretics: Male Homosexuality in English Literature from 1850-1900, by Brian Reade. He appears as Esmé Amarinth in the novel The Green Carnation (1894) by Robert Hichens. Reginald Bunthorne in Gilbert and Sullivan's opera Patience (1881) was widely believed to have been based on Wilde, but it was originally meant to be a caricature of Algernon Charles Swinburne. The character of Toad of Toad Hall in The Wind in the Willows (1908) by Kenneth Grahame was modelled on Wilde. Claude Davenant in Mirage (1887) by George Fleming (pen-name of Julia Constance Fletcher) is believed to be a portrait of Wilde. Cardinal Pirelli in The Princess Zoubaroff (1920), the play by Ronald Firbank, is thought to be a composite of Wilde and the author himself. Wilde appears again in the same play as Lord Orkish. Gabriel Nash in Henry James' The Tragic Muse (1890) is believed to be part portrait of Wilde.

Wilde's parents were successful Anglo-Irish intellectuals in Dublin. Their son became fluent in French and German early in life. At university, Wilde read Greats; he proved himself to be an outstanding classicist, first at Dublin, then at Oxford. He became known for his involvement in the rising philosophy of aestheticism, led by two of his tutors, Walter Pater and John Ruskin. After university, Wilde moved to London into fashionable cultural and social circles.

As a spokesman for aestheticism, he tried his hand at various literary activities: he published a book of poems, lectured in the United States and Canada on the new "English Renaissance in Art" and interior decoration, and then returned to London where he worked prolifically as a journalist. Known for his biting wit, flamboyant dress and glittering conversational skill, Wilde became one of the best-known personalities of his day. At the turn of the 1890s, he refined his ideas about the supremacy of art in a series of dialogues and essays, and incorporated themes of decadence, duplicity, and beauty into what would be his only novel, The Picture of Dorian Gray (1890). The opportunity to construct aesthetic details precisely, and combine them with larger social themes, drew Wilde to write drama. He wrote Salome (1891) in French while in Paris but it was refused a licence for England due to an absolute prohibition on the portrayal of Biblical subjects on the English stage. Unperturbed, Wilde produced four society comedies in the early 1890s, which made him one of the most successful playwrights of late-Victorian London.

NAPOLEON SARONY (1821-1896) Oscar Wilde. Albumen print, the image measuring 139.7x98.4 mm; 5 1/2x3 7/8 inches, the Sarony mount 165.1x111.1 mm; 6 1/2x4 3/8 inches, with Sarony's printed credit and address, and the sitter's credit, in ink, in an unknown hand, on mount recto, and the Culver Pictures label, bar code, and hand stamp, on mount verso. 1882. This photograph was part of the 1882 portrait sitting Oscar Wilde did at Sarony's studio when he began his American lecture tour. During the portrait sitting, Wilde posed for at least 27 pictures in various attire which he anticipated would be distributed to cities in advance of his arrival. It is likely that this was his preferred image, which he described as "the photograph of me with my head looking over my shoulder." 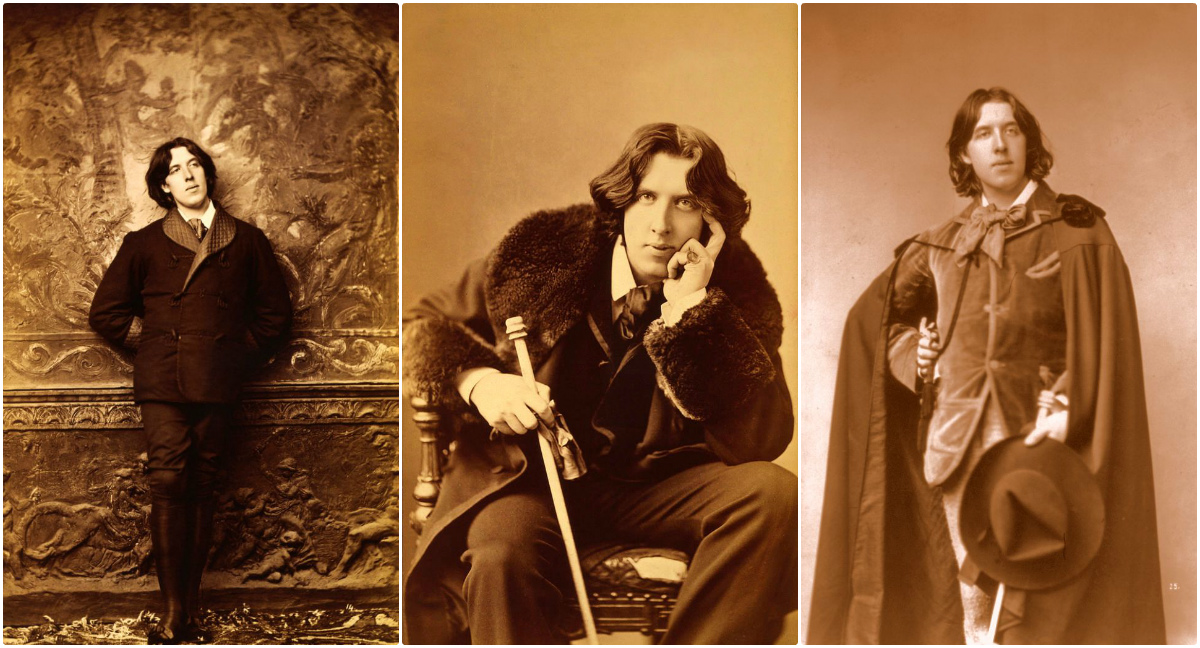 Today, Frank Miles is best known as a friend of Oscar Wilde whom he met at Oxford in 1874 or 1875, where Miles had family connections to the colleges and friends. Miles introduced Wilde to Lillie Langtry, and to his friend and patron Lord Ronald Gower, who later became the model for the worldly Lord Henry Wotton in Wilde's novel The Picture of Dorian Gray and Gower's circle was the inspiration for The Portrait of Mr. W.H. (1889). Miles and Wilde took up a residence together in Tite Street.

If some historians are to be believed, until 1877 Wilde had had no same-sex intimacies, and would not until he had a relationship with Robert Ross in 1886.

Oscar Wilde appeared in America in 1882 on a lecture tour in part designed to promote the Gilbert and Sullivan opera Patience; or, Bunthorne’s Bride. The opera’s main character represented an aesthete—perhaps modeled on Wilde or the poet Algernon Charles Swinburne—who posed with a giant sunflower while spouting his opinions on the latest cultural trends.

When asked by a reporter upon docking in New York who were the greatest American literary figures, Oscar Wilde at once answered Walt Whitman, but in the same breath insisted also on Ralph Waldo Emerson—“New England’s Plato,” Wilde called him, whose “Attic genius” he thought so highly of that when he was in prison and allowed to choose only a few books, one was Emerson’s essays. He quoted from Emerson twice in De Profundis—and very significant quotes they were: “Nothing is more rare in any man than an act of his own”; “all martyrdoms seemed mean to the lookers on.” According to Richard Ellmann, Wilde (who after his visit to Whitman answered not one but all questions about the American poet’s sexuality for years to come by repeating, “The kiss of Walt Whitman is still on my lips”) expanded on the matter significantly: under an inscription by Whitman, Wilde (quoting himself about Wordsworth; it was nothing if not a literary age) wrote of Whitman: “The spirit who living blamelessly but dared to kiss the smitten mouth of his own century.”

To Charles Eliot Norton, Harvard’s (and America’s) first professor of fine arts, Paul Ruskin’s friend, and himself the leading art arbiter in America of his time, Oscar Wilde wrote: “I am in Boston for a few days and hope you will allow me the pleasure of calling on you.” Doubtless Wilde enclosed his letter of recommendation to Norton from the Pre-Raphaelite master Edward Burne-Jones (“any kindness shown to him is shown to me”).

When in 1882 Wilde announced to Henry James, “I am going to Bossston; there I have a letter to the dearest friend of my dearest friend—Charles Eliot Norton from Burne-Jones,” James was not only offended at the name-dropping but, in Richard Ellmann’s words, “revolted by Wilde’s knee breeches, contemptuous at the self-advertising … and nervous about the sensuality … . James’s homosexuality was latent, Wilde’s patent.”

Breakfast on Brattle Street with another Harvard professor, poet Henry Wadsworth Longfellow—through a heavy snow—was rather more sober, but not, Oscar Wilde insisted, less artistic: “When I remember Boston I think only of that lovely old man, who is himself a poem,” Wilde said later.

At work at the Harvard Theatre Collection, Joan Navarre, an independent scholar, stumbled across one of those stiff old sepia photographs of Oscar Wilde, and, turning it over, encountered the great man’s autograph. Above it, furthermore, Wilde had inscribed “To J. Wendell,” with the date 31 January 1882. It was the date of Wilde’s first Boston lecture, when he was notoriously heckled by Evert J. Wendell’s classmates, and the photograph all but proved Wendell to have been there, heckler or no.

Clyde Fitch was the most successful and prolific dramatist of his time, producing nearly sixty plays in a twenty-year career. He was, at least for a short time in the late 1880s and early 90s, Oscar Wilde’s lover, and Wilde influenced his early plays, but Fitch’s study of Ibsen and other European dramatists inspired him to pursue the course of naturalism.

At the height of Wilde's fame and success, while The Importance of Being Earnest (1895) was still being performed in London, Wilde had the Marquess of Queensberry prosecuted for criminal libel. The Marquess was the father of Wilde's lover, Lord Alfred Douglas. The libel trial unearthed evidence that caused Wilde to drop his charges and led to his own arrest and trial for gross indecency with men.

Even after the shocking revelations of a homosexual underworld, there was widespread support for Wilde. An Anglican clergyman paid half of his bail; the other half was paid by the Marquis of Queensberry’s eldest surviving son. A Jewish businessman offered him the free use of his yacht as a means of escape. The servants of his friends the Leversons expressed sympathy with ‘poor Mr Wilde’. The painter Louise Jopling exchanged a ‘sorrowful’ glance with the newsboy who told her of the verdict. W. B. Yeats, whose father urged him to testify for Wilde, brought letters of support from several Irish writers. ‘Cultivated London’, said Yeats, ‘was now full of his advocates.’ When Wilde gave his moving speech on ‘the Love that dare not speak its name’, the hissing from the public gallery was drowned out by applause.

After the trial, there were letters to the press protesting at Wilde’s treatment. The popular journalist W. T. Stead pointed out that Wilde’s ‘unnatural’ propensities were not unnatural for him, and that if he had committed adultery with his friend’s wife or corrupted young girls instead of boys, ‘no one could have laid a finger upon him’. Even The Illustrated Police Budget was sorry that ‘one of the most brilliant wits, epicures, and epigrammatists we have seen in England for years’ had ‘passed from the light of freedom’.

After two more trials Oscar Wilde was convicted and sentenced to two years' hard labour, the maximum penalty, and was jailed from 1895 to 1897. In Paris, the French-American poet Stuart Merrill drew up a petition asking for the sentence to be reduced. Almost everyone refused to sign, including Émile Zola. A British petition, prepared by More Adey, was even less successful. Magnus Hirschfeld had wider aims and a more diverse audience and was consequently more effective. He and his journalist friend Leo Berg sent letters of protest to the newspapers and Hirschfeld set to work on the first of his many books: Sappho und Sokrates, or ‘How can one explain the love of men and women for people of the same sex?’ It was published pseudonymously by a young Leipzig publisher called Max Spohr. Spohr had already published two pro-homosexual works and was to prove remarkably resistant to prosecution.

During his last year in prison, he wrote De Profundis (published posthumously in 1905), a long letter which discusses his spiritual journey through his trials, forming a dark counterpoint to his earlier philosophy of pleasure. On his release, he left immediately for France, never to return to Ireland or Britain. There he wrote his last work, The Ballad of Reading Gaol (1898), a long poem commemorating the harsh rhythms of prison life.

After his release from prison, Oscar Wilde was persuaded by Ernest Dowson to visit a prostitute in Dieppe in order to acquire ‘a more wholesome taste’. When he emerged from the brothel, a small crowd, supposedly, had gathered in the street. He whispered to Dowson, ‘The first these ten years, and it shall be the last. It was like chewing cold mutton!’ Then, in a louder voice: ‘But tell it in England, for it will entirely restore my character!’

In 1898 Sergei Diaghilev toured Berlin, London and Paris, borrowing works of art to exhibit in St Petersburg. In Paris he sought out the exiled Oscar Wilde. Diaghilev was already a striking sight, tall and elegant, with an early white streak in his hair; the pair of them must have gone rather well together. Seeing them walking arm in arm, the women prostitutes are said to have stood on café chairs to hurl abuse at two such obvious threats to their business.

He died destitute in Paris at the age of 46.

David Diamond's Psalm, an orchestral piece of that year, was inspired by a visit to Oscar Wilde’s grave in Père Lachaise and dedicated to André Gide.