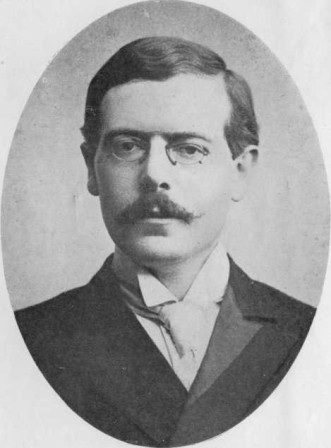 Stuart Fitzrandolph Merrill (August 1, 1863 in Hempstead, New York[1] – December 1, 1915 in Versailles, France) was an American poet, who wrote mostly in the French language. He belonged to the Symbolist school. His principal books of poetry were Les Gammes (1887), Les Fastes (1891), and Petits Poèmes d'Automne (1895).

Merrill was the product of a conservative, wealthy, Protestant upbringing. In 1866, his father George received a diplomatic appointment to Paris, where Merrill would learn French and live for the next 19 years. Stéphane Mallarmé was one of Merrill’s school instructors. His classmates included future symbolists René Ghil and Pierre Quillard. Merrill ran a weekly journal, Le fou, before returning to the States in 1884 to attend law school.[1] On April 15, 1887, Merrill went to Madison Square Theater in New York to hear Walt Whitman give his famous "Death of Abraham Lincoln" lecture. Afterwards, Merrill had the opportunity to meet Whitman, an experience he later recorded in the magazine "Le Masque."[2]

Also in 1887, Merrill published his first book of poems, Les gammes, in Paris, and received wide critical acclaim in Europe. As his literary career took off he participated in radical political causes, siding with the anarchists in the famous Haymarket riots. After two more trials Oscar Wilde was convicted and sentenced to two years' hard labour, the maximum penalty, and was jailed from 1895 to 1897. In Paris, the French-American poet Stuart Merrill drew up a petition asking for the sentence to be reduced. Almost everyone refused to sign, including Émile Zola. A British petition, prepared by More Adey, was even less successful. Magnus Hirschfeld had wider aims and a more diverse audience and was consequently more effective. He and his journalist friend Leo Berg sent letters of protest to the newspapers and Hirschfeld set to work on the first of his many books: Sappho und Sokrates, or ‘How can one explain the love of men and women for people of the same sex?’

Although Merrill's father disinherited him for his politics, his mother would continue to support him financially throughout his life.[1]

In 1890, Merrill published Pastels in Prose, a collection of his translations of French prose poems. This was his only book ever to be published in America. The same year, he returned to Europe permanently and he married in 1891. For the years 1893–1908, his address was 53 Quai de Bourbon, Île Saint-Louis, Paris. Several more books, including Les fastes in 1891 and Petits poèmes d’automne in 1895,[1] were published before his death of heart disease in 1915. In 1927 a small traffic way in the 17th arrondissement of Paris took the name Place Stuart-Merrill.