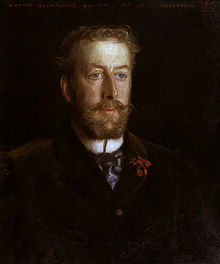 Lord Ronald Charles Sutherland-Leveson-Gower (2 August 1845 – 9 March 1916), known as Lord Ronald Gower, was a Scottish Liberal politician, sculptor and writer[1] from the Leveson-Gower family. He was friends with Horatio Brown. He was a Trustee of the National Portrait Gallery, and of the Birthplace and Shakespeare Memorial Building at Stratford-on-Avon.[5]

He was educated at Eton and at Trinity College, Cambridge.[2]

From 1867–1874, he was a Liberal Member of Parliament for Sutherland. He made only one speech in the House, even though he held the seat for a many years. Reportedly, "it was with some relief that, with the resignation of Gladstone’s government at the beginning of 1874, he relinquished" his seat.[3] He was succeeded as MP by his nephew Cromartie, Marquess of Stafford (the elder surviving son of his eldest brother the 3rd Duke of Sutherland).[4]

A sculptor, he also published a number of works on the fine arts. Lord Ronald shared a studio in Sir Joshua Reynolds’s old home in Leicester Square with the John O’Connor, an Irish landscape painter and theatrical designer.[3] In 1875, he traveled to Paris to begin sculpting in the studio of Albert-Ernest Carrier-Belleuse, one of the founding members of the Société Nationale des Beaux-Arts.[3]

His most important sculpture was the statue of Shakespeare and four of his principal characters, erected in Stratford-upon-Avon.[3] He also created a sculpture depicting Marie Antoinette on her way to the scaffold and another of a member of the Old Guard at Waterloo.[5]

He also wrote biographies of Marie Antoinette and Joan of Arc[7] and a history of the Tower of London.[5] He furthermore published Reminiscences which was a memoir of his upbringing and life.[8]

Gower, who never married, was well known in the homosexual community of the time. Oscar Wilde's story The Portrait of Mr. W. H. has been interpreted as a comment on Gower's social circle, and Gower is generally identified as the model for Lord Henry Wotton in The Picture of Dorian Gray.[9] In 1879, hints of his homosexual liaisons published in the journal Man of the World led Gower to sue the paper, but later in the year the Prince of Wales sent him a letter accusing him of being "a member of an association for unnatural practices", to which Gower wrote an angry reply.[9]

John Addington Symonds, who stayed with him once, stated that Gower "saturates one's spirit in Urningthum [homosexuality] of the rankest most diabolical kind".[9]

Reading his Old Diaries 1881-1901 is an amusing exercise in reading between the lines. He not only met everybody who was anybody, Benjamin Disraeli, Carlyle, Newman, Renan, cardinales and popes, he also met a lot of people who do not appear in the Index. There is the young poet, Percy Pinkerton, an English master at the Armenian College in Venice; or "my artist friend, John O'Connor", or "a young Neapolitan landscape painter, Angelo della Mura, one of whose clever landscapes had attracted me at an exhibition in Naples. He lives with his uncle, also a painter". Together they went over to Capri.

In 1889, Gower traveled to America and donated several of his works to prominent American museums.[6]

In 1890, Gower was implicated in the Cleveland Street Scandal.[11] The Cleveland Street Scandal itself took place in 1889 when a homosexual male brothel in Cleveland Street, Fitzrovia, London was discovered by police. Among others, it was rumoured that Prince Albert Victor, the eldest son of the Prince of Wales and 2nd in line to the British throne, had visited the brothel.[12] In 1890, Lord Ronald as well as Lord Errol were implicated,[13] along with the prominent social figure Alexander Meyrick Broadley,[14][15] who fled abroad for four years.[16][17] The Paris Figaro even alleged that Broadley took General Georges Boulanger and Henri Rochefort to the house.[18]

Henry James settled at Lamb House outside of London in 1897. As closeted as he was in his earlier years, there is greater documentation from his last decades regarding his affairs, or at least his romantic infatuations, with other men. One of these was with an undistinguished sculptor named Hendrik Andersen. They met in Rome at the home of Julia Ward Howe's daughter in 1899 when James was 56 and Andersen was 27. Andersen and his brothers had been poor carpenters and house painters for the wealthy in Newport when Isabella Steward Gardner was taken by their talent and sponsored their travels and education. Andersen also attracted the interest of Lord Ronald Gower. The talented seducer of young men offered to adopt Andersen and make him his heir. Andersen declined.

Gower's most notable relationship was with the journalist Frank Hird, which lasted to the end of Hird's life. Gower later adopted Hird as his son, leading Wilde to remark on one occasion: "Frank may be seen, but not Hird." They are buried together at St Paul's Parish Church, Rusthall, Kent.[10]

In 1913, Francis R. Shackleton (brother of the famed Antarctic explorer Sir Ernest Shackleton) was charged with defrauding Gower of his fortune.[19] Reportedly, Lord Gower entrusted Shackleton with $25,000 for him to invest in 1910. Shackleton induced Lord Ronald to purchase 5,000 shares in the City of Montevideo Public Works Corporation, which were essentially worthless shares that only benefited Shackleton.[20] The amount stolen by Shackleton was later claimed to be upwards of $200,000 from Lord Ronald and $30,000 from his "confidential friend"; Frank Hird.[21] It was alleged that Shackleton initially met Ronald in 1905 and Hird in 1907, whom The New York Times referred to as Lord Ronald's adopted son.[21] Due to the loss, he was forced to sell his country house, Hammerfield at Penshurst in Kent, to Arnold Hills.[3]

Lord Ronald Gower died on 9 March 1916 at his home in Tunbridge Wells, a town in western Kent, England, about 40 miles (64 km) south-east of central London.[5]