Max Ewing (April 7, 1903 - June 18, 1934), American photographer, novelist, composer, pianist, and sculptor. Maxwell Anderson Ewing was born in Pioneer, Ohio on April 7, 1903 to John Caleb and Clara Barto Ewing, to whom he remained close throughout his life. He started playing piano at an early age. He attended the University of Michigan, where he also served as the music critic for the Ann Arbor Time-News before becoming music editor of the Sunday Magazine, a controversial publication associated with the University of Michigan Daily. Ewing moved to New York City in 1924.

The previous year he had published an effusive appreciation of the writer Carl Van Vechten in the University of Michigan student newspaper, and the article was reprinted in the Detroit Free Press in February 4, 1923 with the title “Carl Van Vechten: One of the Rarest Figures in the Whole Galaxy of Contemporary American Writers.”[6] Van Vechten, just starting out in his career as a novelist, was flattered by the praise, writing to Ewing that he was “ a very nice young man to celebrate me in so delightful a fashion in two cities,” and noting that he would “be delighted to meet” him when he arrived in the fall.[7] When they met in New York City a few months later, the two men quickly discovered that they had much in common, despite the twenty-three-year difference in their ages: both were gay, both loved opera, movies, celebrities, and cats, and both were avid collectors of people and things, committed letter-writers and record-keepers. Van Vechten introduced Ewing to the social whirl of bohemian and queer circles in the city, taking him to the raucous parties, speakeasies, and nightclubs that were a hallmark of life in “Jazz Age” New York.

In New York he studied piano under Alexander Siloti for three years before moving to Paris to study with Marcelle Meyer. He enjoyed a successful career as a professional pianist until 1927, when he turned his attention to composition of light musical theater, writing fiction, creating sculptures, and especially photography. He published his only novel, Going Somewhere in 1933. It received positive reviews but did not gain him a reputation as a successful novelist. 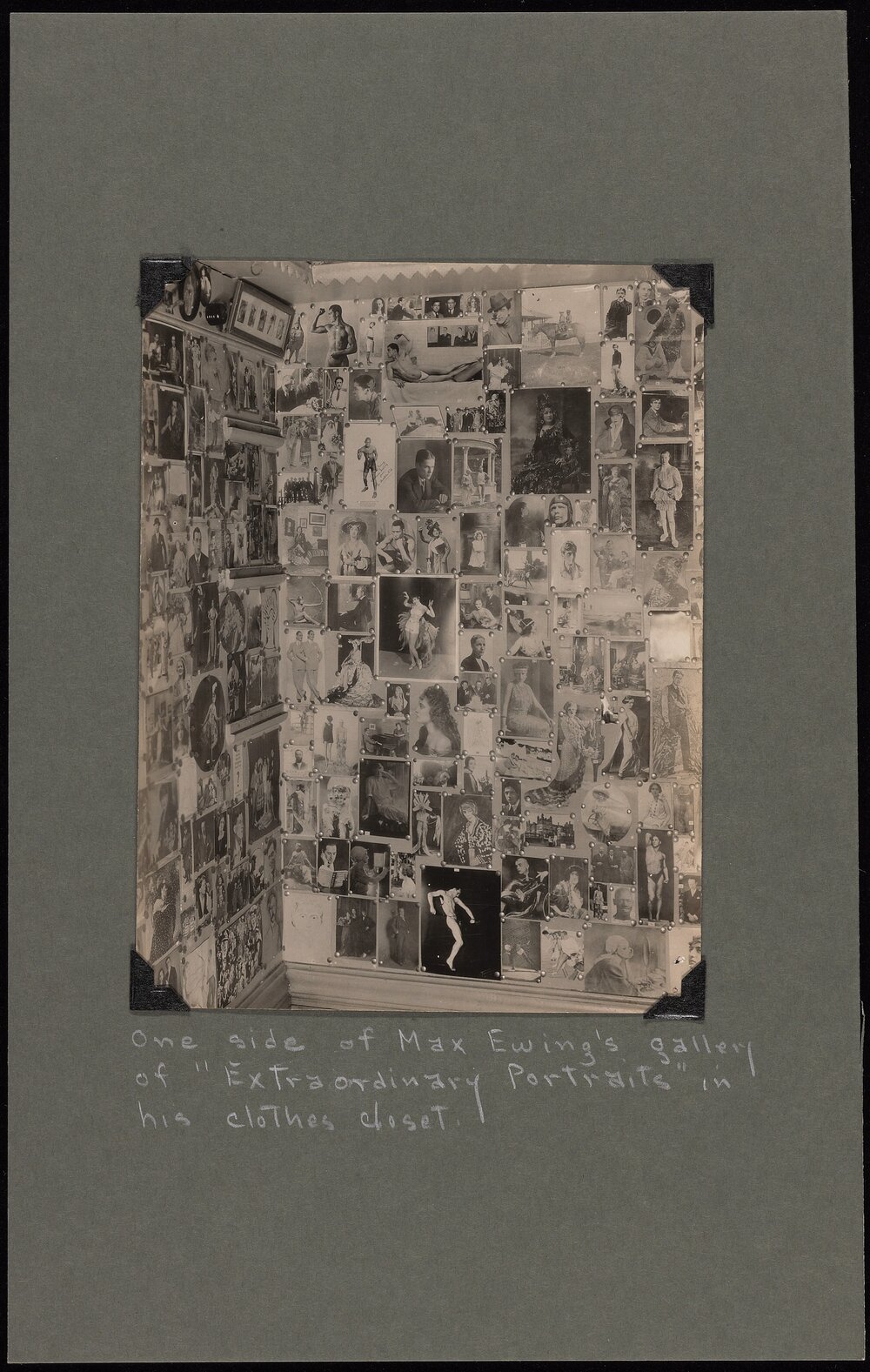 Max Ewing, Photograph of One Side of Max Ewing’s ‘Gallery of Extraordinary Portraits” in His Clothes Closet, 1928 or 1929. Courtesy: Beinecke Rare Book and Manuscript Library, Yale University, by permission of Wallace Ewing. 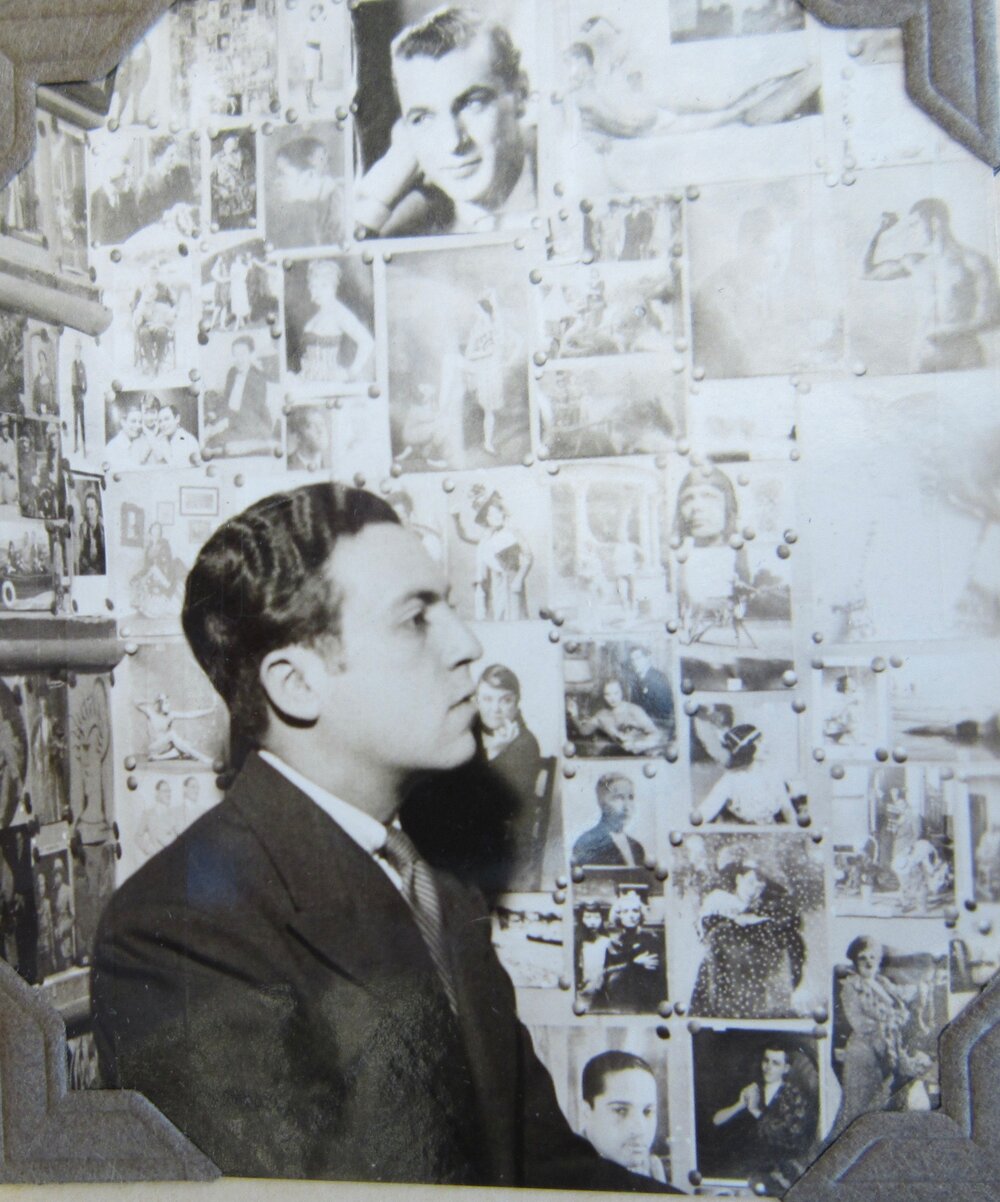 Ewing made extended trips to Europe in 1926 and 1927, moving into his two-room apartment on the eighth floor of 19 West 31st Street (known in those years as the “Maison”) in November 1927.[11] The building, by Carrère and Hastings, had been erected in 1894 to house the offices for Life magazine, a humor magazine later bought (and transformed beyond recognition) by Henry Luce; it also included spacious, one-bedroom, kitchenless apartments with living rooms and walk-in closets for its editors, artists, and staff on the upper floors (figure 2).[12] Even after the magazine moved out in the late 1920s, the building continued to function as an apartment hotel for bachelors, and Ewing was particularly proud that his flat had been the studio of the famous illustrator Charles Dana Gibson.[13] There was space for his piano, the living room was perfect for entertaining, and he soon began to use the walk-in closet to display his prized collection of photos and clippings. He pursued a frenzied schedule of lunches, dinners, and all-night dancing at Harlem nightclubs like Small’s Paradise (where he first saw Paul Meeres, “the brown Valentino”) and the Sugar Cane Club (where he heard Bessie Smith and other jazz artists), regularly inviting his new friends to his open-house “evenings” and cocktail parties.[14] Despite the Depression and his narrowing professional opportunities, this pattern continued until 1933, when he carefully packed up all his treasures and moved—although only briefly—to Hollywood to try his hand at screen writing.

Ewing is best known for his photography, especially the photograph collection "Carnival in Venice" and his 1928 exhibition "Gallery of Extraordinary Portraits." "Carnival of Venice" is a series of photographs of friends posed individually and together against a backdrop depicting a scene from Venice, Italy. Individuals include Muriel Draper, e.e. cummings, Paul Robeson, Berenice Abbott, George Platt Lynes, Lloyd Wescott, Dorothy Crawford, Paul Meeres, Max Ewing, Lincoln Kirstein, and Dorothy Sheldon. The collection received praise from his friends and was shown at the Waldorf-Astoria. For his "Gallery of Extraordinary Portraits," Ewing converted the walk-in closet of his Manhattan studio apartment into a semi-public portrait gallery. He covered the walls with original photographs and reproductions of images of friends and celebrities, representing New York's interracial, gay and lesbian, and artistic circles. This exhibition gained him attention and was re-installed in other New York galleries.

Created by Ewing in a small dressing room in his apartment as a sort of 3-D scrapbook of photos, snapshots, and clippings in 1928, Max Ewing’s closet “gallery” served as a visual memoir of friends, celebrities, and places he admired. It also proved useful as a talking point and magnet for many of those same famous men and women to come to his apartment at 19 West 31st Street, New York, to see themselves in the company of other stars on the walls of his walk-in closet. In addition to a number of portraits of Ewing himself (mostly from his travels in Europe), early installations focused on divas and movie stars like Mary Garden, Marguerite Namara, and Tallulah Bankhead, and on images of scantily-clad body builders, boxers, male dancers and athletes, many of whom Ewing had met in person. The display also included photos of writers and artists including Radclyffe Hall, Oscar Wilde, and Marcel Proust. Contemporary gay and lesbian figures like Jean Cocteau, Glenway Wescott, Margaret Anderson, Princesse Murat, Jane Heap, Djuna Barnes, Gertrude Stein—all of whom Ewing had met —were shown in photographs taken by Ewing’s friends Berenice Abbott and George Platt Lynes, or in Kodak snapshots by Ewing himself. Photographer Carl Van Vecthen and society hostess and writer Muriel Draper also appeared on the wall in multiple images.

Ewing's nearest friends included Carl Van Vechten, who introduced him to many of the people that appear in Ewing's photographs, Muriel Draper, and the boxer Jack Pollock. He suffered from depression throughout his life and required attention from those that were closest to him. He maintained a consistent correspondence with his parents from a young age until their deaths, writing to them weekly. His father died in 1932 and his mother in 1934. Ewing spent the last few months of his life in Pioneer, Ohio before he committed suicide on June 18, 1934, by drowning himself in the Susquehanna River in Binghamton, New York.