She was a Welsh peeress, businesswoman, and active suffragette. The Time and Tide, known as the "Sapphic Graphic", was founded in 1920, owned and edited by Viscountess Rhondda and her partner Theodora Bosanquet, and informed by "intense feminism". “A very radical person and a burning feminist,” whom Emma Goldman met in London through Rebecca West. These women liaised with each other internationally through the League of Nations, the Women’s Freedom League, the British Commonwealth League and the Save the Children Fund. They also collaborated in expressing their political ideas through writing for journals such as Time and Tide edited by Margaret Haig, The Shield edited by Alison Neilans, the Woman’s Leader coedited by Elizabeth Macadam, and collaborated to write books such as Our Freedom and its Results by Five Women, edited by Ray Strachey and with contributions by Eleanor Rathbone, Ray Strachey, Erna Reiss, Alison Neilans and Mary Agnes Hamilton.

Feminists such as Margaret Haig, Cicely Hamilton, or Eleanor Rathbone and her partner Elizabeth Macadam decided to shy away from publicly identifying with images portraying lesbians as pathological deviants and imitators of men. 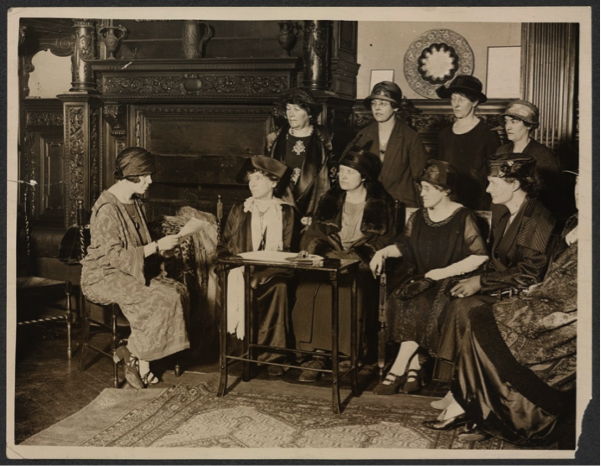 Margaret Haig Thomas was born on 12 June 1883 in London. Her parents were industrialist and politician David Alfred Thomas, first Viscount Rhondda, and Sybil Haig, also a suffragette. In her autobiography, Margaret wrote that her mother had 'prayed passionately that her baby daughter might become feminist'. And indeed she did become a passionate activist for women's rights.

An only child, although born in London Thomas was raised at Llanwern House, near Newport, until the age of 13 when she went away to boarding school, first to Notting Hill High School then St Leonards School in St Andrews. Women’s friendships are the central focus Haig's autobiography, This Was My World, published by Macmillans in 1933. Margaret Haig claimed that she wrote the book by accident. She had intended to write a brief tribute to Miss Sandys, her former headmistress, who was over eighty and suffering ill health. Haig was “thinking of her a good deal” and wanted to write something down of what she meant to her in her schooldays. At Miss Sandys’ suggestion, the reminiscences were better published in a book than as anonymous excerpts in Time and Tide, the feminist journal Haig edited. After being educated by governesses in her childhood, Haig persuaded her father to let her go to St Leonards for her adolescent years. After her mother had “seen the school and all the houses, fallen in love with Miss Sandys at sight, and accepted the offer of a vacancy in her house,” the young Margaret began her St Leonards education. Margaret remained “on intimate terms with her” all her life.

In 1904, aged 19, she took up a place at Somerville College, Oxford, where she studied history. Despite her tutors providing positive feedback on her academic progress, she returned to Llanwern to live with her family after two terms.

Working for her father at the Consolidated Cambrian company headquarters in Cardiff Docks on a salary of £1,000, Thomas spent three years as a debutante.

Lady Rhondda was significant in the history of women's suffrage in the United Kingdom. In 1908 she married Sir Humphrey Mackworth, Bt. They divorced in 1923 and she never remarried. She lived with Time and Tide magazine editor Helen Archdale in the late 1920s. According to Archdale's biographer, David Doughan, "By the early 1920s, she was sharing an apartment, and, together with her family, a country house (Stonepits, Kent) with Lady Rhondda".[1] She later had a close relationship with Winifred Holtby, the author of South Riding, who was in a "friendship" with the writer Vera Brittain.[12] She subsequently spent 25 years living with writer and editor Theodora Bosanquet,[13] who acted as amanuensis to Henry James from 1907 to 1916.

In the same year that she married local Newport landowner Sir Humphrey Mackworth, in 1908 at aged 25 she joined the Women's Social and Political Union (WSPU), and became secretary of its Newport branch. Between 1908 and 1914, she took the campaign for women's suffrage across South Wales, often to hostile and stormy meetings. Thomas was involved in protest marches with the Pankhursts, and jumping onto the running board of Liberal Prime Minister H. H. Asquith's car in St Andrews.

In June 1913 Thomas attempted to destroy a Royal Mail post-box on Risca Road, Newport, with a chemical bomb.[1] The activities resulted in a trial at the Sessions House, Usk, and after refusing to pay a £10 fine, she was sentenced to serve a one month period in jail there. She was released after only five days after going on a hunger strike.[2]

Thomas had been given a Hunger Strike Medal 'for Valour' by WSPU.

On the outbreak of World War I, she accepted the decision by the WSPU leadership to abandon its militant campaign for suffrage. She worked with her father, who was sent by David Lloyd George to the United States of America to arrange the supply of munitions for the British armed forces.

Her father became aware of his daughter's depressive state, and although Margaret brushed her father's concern aside, he became aware of tensions within her marriage. On 7th May 1915, she was returning from the United States on the RMS Lusitania with her father and his secretary Arnold Rhys-Evans, when it was torpedoed at 14:10 by German submarine U-20. Whilst her father and his secretary made it onto a lifeboat, having been blown overboard Margaret spent a long period clinging to a piece of board before being rescued by the Irish trawler "Bluebell", recalled in her 1933 autobiography This Was My World. By the time she was rescued and taken to Queenstown, Margaret had fallen unconscious from hypothermia. After a period in hospital, she then spent several months recuperating at her parents home.

She succeeded her father as chair of the Sanatogen Company in February 1917.[7] In total, she was a director of 33 companies throughout her life, having inherited 28 directorships from her father. The majority of her business interests were in coal, steel and shipping via Consolidated Cambrian Ltd. Passionate about increasing the number of women in the corporate world.

On 3 July 1918, after his hard work on his business interests, politics and latterly his war works, her father died. While the Rhondda Barony died with him, the title of Viscount Rhondda passed to Margaret by special remainder, something Thomas had insisted on from King George V when he was offered the honour.

After her father's death, Lady Rhondda subsequently tried to take his seat in the House of Lords, citing the Sex Disqualification (Removal) Act 1919 which allowed women to exercise "any public office". After initially being accepted, the Committee of Privileges membership was altered and her request was rejected.[4][5][6] She was supported for many years by Lord Astor, whose wife Nancy had been the first woman to take her seat in the House of Commons.

In the summer of 1919, Margaret was involved in creating and chairing the Efficiency Club, a networking organisation for British businesswomen, which she envisioned would have four aims, 1) to promote greater efficiency and cooperation between established businesses and professional women; 2) to encourage leadership and self reliance amongst all women workers; 3) to form a link between businesses and professional women for their mutual benefit and 4) to work towards the admission of women to the British Chambers of Commerce.[8]

However, with the slump in coal prices during the late 1920s, the colliery's of Consolidated Cambrian fell into receivership, and its assets later sold to GKN. Aside from inheriting her father's publishing interests, in 1920 she had founded Time and Tide magazine, a left-wing feminist weekly magazine. But after the collapse of Consolidated Cambrian, her personal accounts show that her outgoings always exceeded her income.

In 1921 she set up the Six Point Group, an action group that focused heavily on the equality between men and women and the rights of the child.[10]

Lady Rhondda was elected as the Institute of Directors' first female president in 1926, and in 2015, the annual Mackworth Lecture was launched by the IoD in her honour.[9]

When Emmeline Pankhurst died in June 1928, it was Kitty Marshall, Rosamund Massey and Lady Rhondda who arranged her memorials. They raised money for her gravestone in Brompton Cemetery and a statue of her outside the House of Commons (which place she had frequently been prevented from entering). Money was also raised to buy the painting that had been made by fellow suffragette Georgina Brackenbury so that it could be given to the National Portrait Gallery.[3] It was unveiled by Stanley Baldwin in 1930.

In Margaret, Lady Rhondda, Bosanquet found a friend with whom she had a lot to do: her love of literature and also the fear of being alone. After a joint sea voyage, they decided to move together. From 1933 they lived either in London (1b Bay Tree Lodge, Frognal, and from 1949 at 70 Arlington House, St. James) or in Shere / Surrey (Churt Halewell). After Margaret's death in 1958, Theodora inherited the house in Surrey and was one of the executors of the will.

Less than a month after Lady Rhondda's death in 1958, women entered the Lords for the first time thanks to the Life Peerages Act 1958; five years later, with the passage of the Peerage Act 1963, hereditary peeresses were also allowed to enter the Lords.

A Canadian steamship, the Lady Mackworth, was named after her.[11]

In 2015, the annual Mackworth Lecture was launched by the Institute of Directors in her honour.[14]

Her name and picture (and those of 58 other women's suffrage supporters) are on the plinth of the statue of Millicent Fawcett in Parliament Square, London, unveiled in 2018.[15][16][17] Lady Rhondda was one of five women shortlisted in 2019 to be portrayed in the first statue of a woman to be erected in Cardiff.[18]