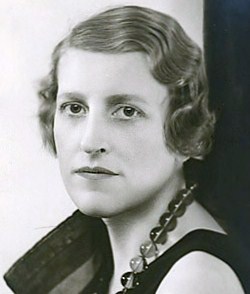 Winifred Holtby (23 June 1898 – 29 September 1935) was an English novelist and journalist, now best known for her novel South Riding, which was posthumously published in 1936. Returning to Oxford after the war to read history, Vera Brittain found it difficult to adjust to life in postwar England. She met Winifred Holtby, and a close friendship developed, both aspiring to become established on the London literary scene. The bond lasted until Holtby's death from kidney failure in 1935.[4] Holtby had also a close relationship with Margaret Haig Thomas, 2nd Viscountess Rhondda.

Holtby was born to a prosperous farming family in the village of Rudston, Yorkshire. Her father was David Holtby and her mother, Alice, was afterwards the first alderwoman on the East Riding County Council.[1] Holtby was educated at home by a governess and then at Queen Margaret's School in Scarborough. Although she passed the entrance exam for Somerville College, Oxford in 1917, she chose to join the Women's Army Auxiliary Corps (WAAC) in early 1918 but soon after she arrived in France, the First World War came to an end and she returned home.[2]

In 1919, she returned to study at the University of Oxford where she met Vera Brittain, a fellow student and later the author of Testament of Youth, with whom she maintained a lifelong friendship. Other literary contemporaries at Somerville College included Hilda Reid, Margaret Kennedy and Sylvia Thompson. After graduating from Oxford, in 1921, Winifred and Vera moved to London, hoping to establish themselves as writers (the blue plaque at No. 82 Doughty Street refers).[2]

Holtby was, together with Brittain, an ardent feminist, socialist and pacifist. She lectured extensively for the League of Nations Union and was a member of the feminist Six Point Group. She was active in the Independent Labour Party and was a staunch campaigner for the unionisation of black workers in South Africa, during which she had considerable contact with Leonard Woolf.

Personally, I am a feminist … because I dislike everything that feminism implies. … I want to be about the work in which my real interests lie … But while … injustice is done and opportunity denied to the great majority of women, I shall have to be a feminist.[3]

After Brittain's marriage in 1925 to George Catlin, Holtby shared her friend's homes in Nevern Place and subsequently at 19 Glebe Place, Chelsea; Catlin resented the arrangement and his wife's close friendship with Holtby,[4] who nevertheless became an adoptive aunt to Brittain's two children, John and Shirley (Baroness Shirley Williams).

Holtby began to suffer from high blood pressure, recurrent headaches and bouts of lassitude, and in 1931 she was diagnosed as suffering from Bright's disease. Her doctor gave her only two years to live. Aware of her impending death, Holtby put all her remaining energy into what became her most important book, South Riding. Winifred Holtby died on 29 September 1935, aged 37. She never married, though she had an unsatisfactory relationship with a man named Harry Pearson, who proposed to her on her deathbed.

As well as her journalism, Holtby wrote 14 books, including six novels; two volumes of short stories; the first critical study of Virginia Woolf (1932) and Women and a Changing Civilization (1934), a feminist survey with opinions that are still relevant.[6] She dedicated the latter book to composer Dame Ethel Smyth and actress and writer Cicely Hamiltion, both strong suffragists who "did more than write"The March of the Women",[7] the song composed in 1910 for the Women's Social and Political Union.[8] She also wrote poetry, including poems about Vera Brittain's dead brother, Edward.

Holtby is best remembered for her novel South Riding edited by Vera Brittain and published posthumously in March 1936, which received high praise from the critics. The book won the James Tait Black Memorial Prize for 1936[9] and has never been out of print. In 1938, it was made into a film directed by Victor Saville;[10][6] in 1974 it was adapted by Stan Barstow for Yorkshire Television and in 2011, BBC One produced a three-part dramatisation by Andrew Davies.[11] There have also been several radio adaptations, the most recent for BBC Radio Four in 2005.[12]

Vera Brittain wrote about her friendship with Holtby in her book Testament of Friendship (1940) and in 1960, published a censored edition of their correspondence.[13] Their letters, along with many of Holtby's other papers, were donated in 1960 to Hull Central Library in Yorkshire and are now held at the Hull History Centre. Other papers are in Bridlington library in Yorkshire, in McMaster University Library in Canada and in the University of Cape Town library in South Africa. A biography by Marion Shaw of Holtby, entitled The Clear Stream, was published in 1999 and draws on a broad range of sources.

Holtby was buried in All Saints' churchyard in Rudston, East Yorkshire, just yards from the house in which she was born. Her epitaph in her words is "God give me work till my life shall end and life till my work is done".[14]