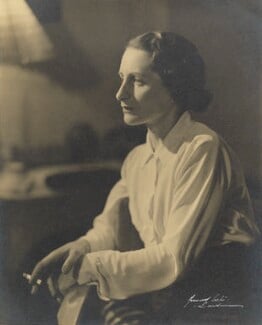 Vera Mary Brittain (29 December 1893 – 29 March 1970) was an English Voluntary Aid Detachment (VAD) nurse, writer, feminist, socialist[1], and pacifist. Her best-selling 1933 memoir Testament of Youth recounted her experiences during the First World War and the beginning of her journey towards pacifism. Returning to Oxford after the war to read history, Brittain found it difficult to adjust to life in postwar England. She met Winifred Holtby, and a close friendship developed, both aspiring to become established on the London literary scene. The bond lasted until Holtby's death from kidney failure in 1935.[4] Writing in 1940 about her friendship with Winifred Holtby, in Testament of Friendship Vera Brittain explicitly denied that their relationship was lesbian, the necessity of which would not have occured to an author writing twently years earlier, before The Well of Loneliness by Radclyffe Hall was published.

Born in Newcastle-under-Lyme, Brittain was the daughter of a well-to-do paper manufacturer, Thomas Arthur Brittain (1864–1935) and his wife, Edith Bervon (1868–1948), who owned paper mills in Hanley and Cheddleton.

When she was 18 months old, her family moved to Macclesfield, Cheshire, and when she was 11 years old, they moved again; to the spa town of Buxton in Derbyshire. Growing up, her only brother Edward was her closest companion. From the age of 13, she attended boarding school at St Monica's, Kingswood, Surrey where her aunt was the principal.

Overcoming her father's initial objections, she read English Literature at Somerville College, Oxford, delaying her degree after one year in the summer of 1915 to work as a Voluntary Aid Detachment (VAD) nurse for much of the First World War, initially in Buxton and later in London, Malta and France. Her fiancé Roland Leighton, close friends Victor Richardson and Geoffrey Thurlow, and her brother Edward, were all killed in the war.[2] Their letters to each other are documented in the book Letters from a Lost Generation. In one letter Leighton speaks for his generation of public school volunteers when he writes that he feels the need to play an "active part" in the war.[3]

After she left Oxford in 1921 Vera Brittain, with Winifred Holtby, removed her ‘disappointing spinsterhood’ to Bloomsbury and took up a career as journalist, writer and political activist. She lectured for the League of Nations and travelled widely. Her parents tolerated their breakaway daughter: ‘They understood now that freedom, however uncomfortable, and self-support, however hard to achieve, were the only conditions in which a feminist of the War generation… could do her work and maintain self-respect.’ Vera Brittain’s father generously made over to her a small private income – not enough to live on, but enough to save her from penury. With this, her Oxford education and her middle-class confidence, Vera was in a good position to follow her star. But there were also women who had never studied medieval economics or Greek verbs who were beginning to realise that lack of a husband might be a beginning and not an end.

Vera Brittain’s war had left her beached and bereft; and yet it was inconceivable to her that she return home to her parents in provincial Buxton, where their narrow-minded social circle continually tut-tutted about her failure to get a husband. Self-sufficiency was all, but self-sufficiency shared made for a less lonely independence. She and Winifred Holtby determined to survive on their scanty allowances, coaching, teaching, writing and part-time lecturing. They rented a partitioned studio in Bloomsbury. It was freezing cold, sunless and cramped. Her relatives were astounded that she could endure the discomfort – ‘but to me it was Paradise’. She and Winifred ‘revell[ed] in the uninterrupted companionship of those crowded days, so busy and yet so free…’ It was a complicated, fruitful partnership. Both were driven by literary and political ambitions, both had lived through the dark days of the war, loving and losing. Both were courageous, independent-minded feminists. For Vera, this friendship, with its intellectual guidance and practical support, went some way to replace the beloved brother Edward whom she had lost. For Winifred, it saved her from the fate of poor Caroline. Together they wrote, lectured, travelled, admired each other’s clothes, cleaned the studio and cooked their dinners. Together they praised, rejoiced, commiserated and remembered.

In Testament of Youth she tells how in the early 1920s she was importuned by cynical married men, sugar-daddies, ‘fussy and futile’ middle-aged men, lechers, wimps and drippy poetic types who ‘hadn’t the brains of an earwig’. They were ‘insufferably second-rate’. How desperate did one have to be? When Vera finally met Gordon Catlin, the man whom she was to marry, she was tortured with doubts. Shortly before agreeing to be his wife she had a terrible dream that Roland Leighton had never really died, but had gone missing with amnesia, and after terrible suffering had returned to England ‘anxious to marry me’. She woke racked with anguish.

In 1925, Brittain married George Catlin, a political scientist (1896–1979). Their son, John Edward Brittain-Catlin (1927–1987), with whom Vera had a difficult relationship, was an artist, painter, businessman, and the author of the autobiography Family Quartet, which appeared in 1987. Their daughter, born 1930, is the former Labour Cabinet Minister, now Liberal Democrat peer, Shirley Williams, one of the "Gang of Four" rebels on the right-wing of the Labour Party who defected to found the SDP in 1981.

Winifred Holtby was robust about her childlessness. She did not deny her strong maternal feelings towards small children, but neither did she indulge in sentimental regrets for the babies she would never bear. It must have been hard for her when in 1925 her best friend Vera Brittain found a husband, Gordon Catlin, and harder still when their first child was born two years later. But Winifred was simply fascinated gazing at Vera’s newborn: ‘His head’s just like a pussy-willow,’ she observed. One might have supposed that Winifred’s jumble of feelings would have driven her to avoid contact with the baby, but far from it. According to Vera, she became John Edward’s ‘discreet but devoted slave…’, deeply loving to him, often pushing him in his perambulator to the Chelsea Babies’ Club clinic, and even taking charge of Vera’s entire family of five under-sevens when she and Gordon went to America on a lecture tour. Thus she was forthright and realistic about children. Babies were ‘a nuisance’, and boring, and anyone considering having one should contemplate seriously the prospect of a great deal of laundry. At the same time she sought contact with them; according to Vera children were, for her, an ‘essential part of experience’. After his Auntie Winifred’s untimely death, seven-year-old John Edward was silent and miserable for weeks, heartbroken.

Brittain's first published novel, The Dark Tide (1923), created scandal as it caricatured dons at Oxford, especially at Somerville. In 1933, she published the work for which she became famous, Testament of Youth, followed by Testament of Friendship (1940)—her tribute to and biography of Winifred Holtby—and Testament of Experience (1957), the continuation of her own story, which spanned the years between 1925–1950. Vera Brittain wrote from the heart, basing many of her novels on actual experiences and actual people. In this regard, her novel Honourable Estate (1936) was autobiographical, dealing with Brittain's failed friendship with the novelist Phyllis Bentley, her romantic feelings for her American publisher George Brett Jr, and her brother Edward's death in action on the Italian Front in 1918. Brittain's diaries from 1913–17 were published in 1981 as Chronicle of Youth. Some critics have argued that Testament of Youth differs greatly from Brittain's writings during the war, suggesting she was more in control when writing retrospectively.[5]

In the 1920s, she became a regular speaker on behalf of the League of Nations Union, but in June 1936 she was invited to speak at a peace rally in Dorchester, where she shared a platform with Dick Sheppard, George Lansbury, Laurence Housman, and Donald Soper. Afterwards, Sheppard invited her to join the Peace Pledge Union. Following six months' careful reflection, she replied in January 1937 to say she would. Later that year, Brittain also joined the Anglican Pacifist Fellowship. Her newly found pacifism came to the fore during World War II, when she began the series of Letters to Peacelovers.

She was a practical pacifist in the sense that she helped the war effort by working as a fire warden and by travelling around the country raising funds for the Peace Pledge Union's food relief campaign. She was vilified for speaking out against saturation bombing of German cities through her 1944 booklet Massacre by Bombing. In 1945, the Nazis' Black Book of nearly 3,000 people to be immediately arrested in Britain after a German invasion was shown to include her name.[6]

From the 1930s onwards, Brittain was a regular contributor to the pacifist magazine Peace News. She eventually became a member of the magazine's editorial board and during the 1950s and 1960s was "writing articles against apartheid and colonialism and in favour of nuclear disarmament".[7] Vera wrote a novel, Honourable Estate (1936), in which she depicted a homosexual character called Richard Alleyndene, the brother of the heroine. To avoid a court martial for homosexuality, Richard becomes involved in the Gallipoli campaign with the intention of being killed.

In November 1966, she suffered a fall in a badly lit London street en route to a speaking engagement. She attended the engagement, but afterwards found she had suffered a fractured left arm and broken little finger of her right hand. These injuries began a physical decline in which her mind became more confused and withdrawn.[8] Around this time the BBC interviewed her; when asked of her memories of Roland Leighton, she replied "who is Roland"?

Brittain never fully got over the death in June 1918 of her beloved brother, Edward. She died in Wimbledon on 29 March 1970, aged 76. Her will requested that her ashes be scattered on Edward's grave on the Asiago Plateau in Italy – "...for nearly 50 years much of my heart has been in that Italian village cemetery"[9]— and her daughter honoured this request in September 1970.[10]

Plaques marking Brittain's former homes can be seen at 9 Sidmouth Avenue, Newcastle-under-Lyme;[19] 151 Park Road, Buxton;[20] 58 Doughty Street, Bloomsbury; and 117 Wymering Mansions, Maida Vale, west London.[21] There is also a plaque in the Buxton Pavilion Gardens, commemorating Brittain's residence in the town, though the dates shown on the plaque for her time there are incorrect.