Marguerite "Peggy" Guggenheim (August 26, 1898 – December 23, 1979) was an American art collector, bohemian and socialite. Born to the wealthy New York City Guggenheim family, she was the daughter of Benjamin Guggenheim, who went down with the Titanic in 1912, and the niece of Solomon R. Guggenheim, who established the Solomon R. Guggenheim Foundation. Guggenheim collected art in Europe and America primarily between 1938 and 1946. She exhibited this collection as she built it; in 1949, she settled in Venice, where she lived and exhibited her collection for the rest of her life. The Peggy Guggenheim Collection is a modern art museum on the Grand Canal in Venice, Italy, and is one of the most visited attractions in Venice. Peggy Guggenheim provided Djuna Barnes with a grudging monthly allowance (ungratefully received) that helped sustain her for the rest of her life.

The relationships among Djuna Barnes, Emily Coleman, Antonia White, and Peggy Guggenheim were intense, sexually charged, emotionally intricate affairs that were, in turn, hurtful and inspiring, cruel and nurturing. Ultimately, however, these relationships were the most central to their writing. While men came and went in all of their lives, their relationships, replete with emotional brutality, persevered. Barnes called Coleman "a prima vera with blood on her lips", and White sometimes dismissed Coleman as mad. White and Coleman were fond of telling Barnes that she was shallow and couldn't analyze. However, aside from the black eye Coleman once gave Peggy Guggenheim, the most scathing criticism within the group was reserved for White. Barnes lamented to White that although she tried to like her writing, she just couldn't, and went on to tell White that she was a "bad, bad woman".

Barnes, White, and Coleman speak at later points in their lives of having had sex with and being sexually attracted to other women. Djuna Barnes, of course, went on to have more love affairs with women. Emily Coleman would admit "the only genuine sexual feelings I have had were the Lesbian affair I had in 1929". Antonia White similarly later conceded that she desired a woman more than she had ever desired her husband. Among the four, Peggy Guggenheim was perhaps the most determinedly heterosexual. Even she, however, had female lovers throughout her life, including Djuna Barnes's great love, Thelma Wood, an attachment which would certainly seem to have exacerbated tensions between Bames and Guggenheim. 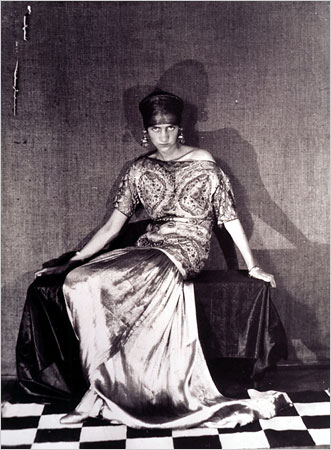 Portrait of a Woman (Peggy Guggenheim), by Janet Scudder

Barnes wrote her best-known novel, Nightwood, while staying at the Devon country house, Hayford Hall, that Guggenheim had rented for two summers.

In 1926 Peggy Guggenheim, who often lent her financial support to the Paris colony of artists and writers, telephoned Man Ray to arrange a studio appointment to have her portrait taken, not by Man Ray himself, but by Berenice Abbott. Afterwards Man Ray was livid, he now realized that Berenice had become a serious business rival, and the next day he fired her. Berenice immediately made plans to have a studio of her own and friends of Berenice stepped forward to help her. When she made arrangements to purchase a view camera – Peggy Guggenheim lent her the money to pay for it. As partial repayment, Berenice later photographed Peggy’s children. In 1926, she had her first solo exhibition (in the gallery "Au Sacre du Printemps") and started her own studio on the rue du Bac.

Guggenheim became close friends with writer Natalie Barney and artist Romaine Brooks and was a regular at Barney's salon.

Guggenheim's first marriage was to Laurence Vail, a Dada sculptor and writer who had been Djuna Barnes' lover, and with whom Guggenheim had two children, Michael Cedric Sindbad Vail (1923–1986) and Pegeen Vail Guggenheim (1925–1967). They divorced in about 1928 following his affair with writer Kay Boyle, whom he later married. Soon after her first marriage dissolved, she had an affair with John Ferrar Holms, a writer with writer's block who had been a war hero.[4][13] Starting in December 1939, she and Samuel Beckett had a brief but intense affair, and he encouraged her to turn exclusively to modern art.[4] She married her second husband, painter Max Ernst, in 1941 and divorced him in 1946.[7] Among her eight grandchildren is Karole Vail, who was appointed director of the Peggy Guggenheim Collection in 2017.[14]

In the mid-1940s Peggy Guggenheim had an art gallery, The Art of This Century, in New York City. After spending a few months in New York in 1935, Kenneth Macpherson eventually based himself there to focus on writing, photography and his art collection. It was here that he met Peggy Guggenheim, who instantly fell in love with him and with whom he shared an apartment for a while.

By the mid-1940s Jean Connolly had dropped Clement Greenberg and was involved with Laurence Vail, the Surrealist artist and former husband of Peggy Guggenheim. With bohemian aplomb, however, it was the two women who began living together in Guggenheim's duplex at East 61st Street, New York. Thank to this arrangement, Rupert Barneby and Dwight Ripley found themselves frequently in New York at the center of Upper Bohemia. "Jean Connolly, Dwight Ripley, Matta, Marcel Duchamp were around a great deal," recalled Lee Krasner, the painter who was Jackson Pollock's wife. "They were at all the parties." Rupert and Dwight were at the now famous party during which Pollock's Mural was first shown and Pollock relieved himself in the fireplace. Barneby remembered Marcel Duchamp, the avatar of cool in the art world today, as a "pompous pundit." He recalled Guggenheim herself as "mean"; she "dressed like a hag," her stagy consersational asides were "like a dagger in the heart."

Dwight Ripley soon was having an affair with Peggy Guggenheim, who admired his English accent, his youth (he was ten years younger), and his indifference to her wealth. She liked to introduce him as her fiancé. "She fell abruptly out of love with Dwight," said Rupert. "He was staying at her house at East 61st and she'd gone out to some party, and Dwight came back in a cab with a very handsome driver, and Peggy found them in bed together."

At Harrow, Dwight already liked to draw, and in the US he began to draw with the same kind of attention he gave to languages and botany. His work was done almost entirely in colored pencil on paper, at a time that made him a pioneer in this medium, and his first showing was arranged by Peggy Guggenheim, the year after the cabdriver incident, at Art of This Century.

As late as 1962, in such a supposedly accepting, cosmopolitan city as Venice, Peggy Guggenheim, who in 1948 had bought and renovated the Palazzo Venier dei Leoni, once Luisa Casati’s home, lost some of her expatriate gay friends when the Venice police decided to rid the city of such types. Those who went included the Beat writer Alan Ansen, the painter Robert Brady and the art dealer Arthur Jeffress.