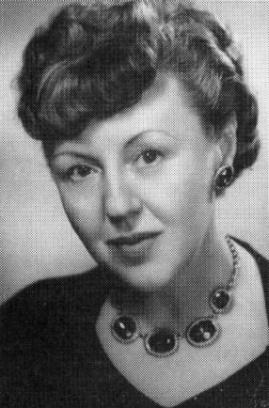 Antonia White (31 March 1899, London – 10 April 1980) was a British writer. The relationships among Djuna Barnes, Emily Coleman, Antonia White, and Peggy Guggenheim were intense, sexually charged, emotionally intricate affairs that were, in turn, hurtful and inspiring, cruel and nurturing. Ultimately, however, these relationships were the most central to their writing. While men came and went in all of their lives, their relationships, replete with emotional brutality, persevered. Barnes called Coleman "a prima vera with blood on her lips", and White sometimes dismissed Coleman as mad. White and Coleman were fond of telling Barnes that she was shallow and couldn't analyze. However, aside from the black eye Coleman once gave Peggy Guggenheim, the most scathing criticism within the group was reserved for White. Barnes lamented to White that although she tried to like her writing, she just couldn't, and went on to tell White that she was a "bad, bad woman".

Barnes, White, and Coleman speak at later points in their lives of having had sex with and being sexually attracted to other women. Djuna Barnes, of course, went on to have more love affairs with women. Emily Coleman would admit "the only genuine sexual feelings I have had were the Lesbian affair I had in 1929". Antonia White similarly later conceded that she desired a woman more than she had ever desired her husband. Among the four, Peggy Guggenheim was perhaps the most determinedly heterosexual. Even she, however, had female lovers throughout her life, including Djuna Barnes's great love, Thelma Wood, an attachment which would certainly seem to have exacerbated tensions between Bames and Guggenheim.

White was born as Eirene Botting to parents Cecil and Christine Botting. She later took her mother's maiden name, White. Her father taught Greek and Latin at St. Paul’s School. She was baptized in the Protestant Church of England but converted to Roman Catholicism at the age of 9 when her father converted. She struggled with religion and did not feel that she fitted in with the other girls at her school, many of whom were from upper-class Catholic families. She attended the Convent of the Sacred Heart, Roehampton (later Woldingham School, Surrey).[1][2]

Although she is remembered as a modernist writer, she developed a terrible fear of writing after a misunderstanding when she was 15. She had been working on what was going to be her first novel, which was to be a present for her father. She wanted to surprise him with a book about wicked people whose lives are changed as they discover religion. She attempted to give a detailed description of the evil characters, but, because of her lack of experience, she was unable to describe their wickedness except to say that they "Indulged in nameless vices". The story was found unfinished by officials at her Catholic school and she was then expelled from the school without being given the opportunity to explain her book. She describes this incident as being her most vivid and tragic memory. "My superb gift to my father was absolutely my undoing" she remarked in an interview. She did not begin writing novels again until 20 years later, when her father died.

After she was expelled from the convent at Roehampton, she attended St. Paul’s Girls' School (the sister school to St Paul's School where her father taught), but did not fit in there either. When she left school she attempted to become an actress, but was unsuccessful. She then wrote for magazines and worked in advertising, where she earned £250 a year promoting Mercolized wax. She spent nine years working as a copywriter in London and she also worked for the BBC as a translator. Antonia White's translations of Colette's 'Claudine' novels were recognised for their elegance and erudition and remain the standard texts today.

In 1921 she was married to the first of her three husbands. The marriage was annulled only 2 years later, and reportedly was never consummated. She immediately fell in love again with a man named Robert, who was an officer in the Scots Guards. They never married, and their relationship was brief but intense, which led to her experiencing a severe mental breakdown. She was committed to Bethlem, a public asylum, where she spent the next year of her life.

She had described her breakdown as a period of "mania". After she left the hospital, she spent four years participating in Freudian studies. She struggled the rest of her life with mental illness which she referred to as "The Beast".

The "Diaries" are a series of notebooks kept irregularly between 1926 and 1957. Two earlier journals were burned, it seems, during a period of friendship with Benedicta de Bezer, a nightclub pianist and lesbian. Bezer was an ultra-devout Catholic transvestite given to dressing up as a monk in her room in Belsize Park. Both White and the 17-year-old Susan fell in love with de Bezer. She was a tertiary of the Dominican Order, and under her influence – or, rather, in its backwash, because mother and daughter soon began to feel satanic influences radiating from her – White became a tertiary too. The ceremony took place at Easter 1947 in Paris, with Susan in attendance. When she got back to London, White bought a black and white kitten (the Dominican colours) and called it Domina.

In the early 1930s, trying to overcome the painful breaking other relationship with Thelma Wood, Djuna Barnes went to England, where, surrounded by her friends Peggy Guggenheim, Emily Coleman, and Antonia White, she wrote her last significant work, the novel Nightwood (1936).

White's second marriage was to a man named Eric Earnshaw Smith, but this marriage ended in divorce. By the age of 30, she had been married 3 times. During her second marriage, she had fallen in love with two men. One was Rudolph 'Silas' Glossop, described as "a tall handsome young man with a slightly melancholy charm". The other was Tom Hopkinson, then a copywriter. She had trouble deciding whom she should marry following her divorce, and she married Hopkinson in 1930. She had two daughters, Lyndall Hopkinson and Susan Chitty, who have both written autobiographical books about their difficult relationship with their mother.[3][4]

Hopkinson was a hero for his wife and daughters until he falls under the spell of Dorothy Kingsmill, who later became his third wife. Dorothy Kingsmill enters the story married to the writer Hugh Kingsmill, who died in 1949. She was an amateur psychoanalyst, a dangerous species, but she managed to get Antonia White out of her worst writer’s block. A guru called Baba Meher counselled her telepathically from India, and was soon counselling White as well. Kingsmill was the most dominant of the ‘dominating women’ who dominated White at various periods.