Alice Corbin was born in St. Louis, Missouri, to Lula Hebe Carradine and Fillmore Mallory Corbin. Her mother died in 1884 and she was briefly sent to live with her father's cousin Alice Mallory Richardson in Chicago before returning to her father in Kansas after his remarriage in 1891. After high school graduation, Harriet C. Brainard, Corbin's English teacher, persuaded her to attend the University of Chicago. In 1898 Corbin published her first book of poetry, The Linnet Songs. Corbin lived with Brainard for three years until her health forced her to move to a milder climate.

The inflammation in her chest subsided and after a year at Sophie Newcomb College in New Orleans, Corbin returned to Chicago. Writing reviews for the Chicago Tribune and Evening Post provided the income for Corbin to rent a studio at the Academy of Fine Arts in 1904, where she met William Penhallow Henderson, a painter, architect and furniture designer, who was teaching there at the time. They married on October 14, 1905. Daughter Alice was born on January 27, 1907, and was their only child.

In 1912 Henderson's second collection of poems, The Spinning Woman of the Sky, was published, and she became assistant editor to Harriet Monroe at Poetry magazine.[1] She left Chicago for Santa Fe, New Mexico in 1916, after having been diagnosed with tuberculosis.[2] She continued working on Poetry by long distance until 1922. 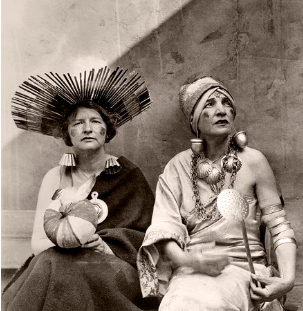 She was also a supporter of Native Americans civil rights and art. In 1920 she assembled a group of watercolor paintings by Awa Tsireh for exhibition at the Arts Club of Chicago.[3] In December of 1922, her daughter, Alice Henderson, married John Evans, son of Mabel Dodge Luhan. Even though the marriage was short-lived, it established a life-long relationship between Luhan and the Hendersons. John and Alice Evans lived in Santa Fe where their first two daughters were born, Natalie on January 8, 1924, and Nancy on February 23, 1925. John Evans, Edwin Brooks, and William Henderson began the Pueblo-Spanish Building Company in 1925, and that fall the Evans family moved to Buffalo, NY, John Evans's family home. The Evans's third daughter, Letitia, was born on November 6, 1926. In 1938 Alice Henderson married Edgar Rosin, who died in 1948. When she knew she was battling terminal cancer in 1987, she married Carlton Colquitt.

In 1937, Corbin helped found what is now called the Wheelwright Museum of the American Indian,[2] and became its curator. William helped design the building and the sand painting panels inside, and Corbin was the curator when it was completed. Another Corbin project was the formation of the Eugene Manlove Rhodes Memorial Association and the erection of a monument to this Southwestern writer on his grave site in New Mexico. The Hendersons joined efforts again in 1937 with William illustrating Alice's Brothers of Light, her last published book.

Corbin's health was unsound throughout much of her life. There were many periods when she was simply too weak to work, and the need to work to overcome financial problems created additional stress. William's death in 1943 of a heart attack further weakened her will, and she became increasingly unwell until her death in 1949.

Many of her papers can be found in the Harry Ransom Center at the University of Texas in Austin.[4]