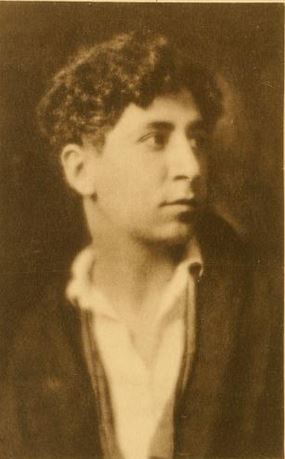 Scharmel Iris (February 10, 1889 – July 6, 1967) was an ambitious Italian-American Catholic poet, who cultivated a reputation as a forger and con artist in Chicago for his many creative attempts to achieve fame.

Born in Castelcivita, Italy, in 1889 as Frederico Scaramella, as a child, Iris had emigrated from Italy with his mother, who arrived in Chicago in pursuit of the American dream. Driven by ambition and narcissism, he began publishing poetry in 1905, participated in the Chicago Renaissance, and continued publishing until two years before his death in 1967.

In the 1910s Iris wrote to Louise Imogen Guiney, according to him, on behalf of Jane Addams, asking for a review of his poems by Guiney. Guiney replied to Addams saying she could not positively review them, since they were "just good enough to be quite hopeless". In reply Addams said she did not ask Iris to write her, she just suggested to Iris to search for reviews for his works, and cited her name.

In November 1914 Iris published 5 poems in the Little Review edited by Margaret Anderson.

Using several pseudonyms, Iris got poems into issues of Harriet Monroe's Poetry, December 1914 and September 1917. Iris was also included in Monroe's pioneer anthology, New Poetry (1917). She published his poems beginning in 1914, the first batch under his name. But as he ingratiated himself to her, pled for introductions to other poets and editors, she discovered he had forged a letter from her to win favor in a poetry contest, and he was banished from her circle. She removed him from the second edition of New Poetry (1920). No problem. Iris submitted more poems under pseudonyms, and Monroe, inexplicably, took them. As Wesley Ames he had 5 poems in the September 1931 issue, as John Creagh five poems in October 1931, as Stanley Blackpool four poems in May 1932, and as Everett Owens four poems in August 1934.

In 1920 Iris was included in Fitzgerald's collection of poetry This side of Paradise. Following collection were: Bread Out of Stone, 1953 (with a forged introduction by Yeats, in which Yeats claimed, some fourteen years after his death, that "of poets writing today there is no greater" than Iris), The Seven Hills of the Dove, 1957, A Singing Reed, 1963, Spanish Earth, 1964, The Judgement Seat (with "introduction by Dame Edith Sitwell"), 1965.

Iris never wavered from his goal of becoming the next great American poet, although his dedication to this goal led him into poverty. In order to support himself, he often used the pseudonym Vincent Holme to write letters of praise for his own work to publishers, or to attempt to raise funds from patrons of the humanities. Similarly, he wrote letters claiming to be the friend or relative of celebrated artists such as T.S. Eliot, W.B. Yeats, Salvador Dalí, Pablo Picasso, Robert Frost, Joyce Kilmer, Ezra Pound, Diego Rivera, Winston Churchill, Theodore Roosevelt, William Wrigley, and Woodrow Wilson.

Having established a connection with Lewis College, a Catholic institution near Joliet, Iris used it first as his address and then as his home. He never taught there and had no faculty status, and when asked to leave in 1966, he moved to St. Patrick Retirement Hotel in Joliet, where he died in 1967.

His papers are hold at The Newberry Library, Chicaco's Independent Research Library since 1887.