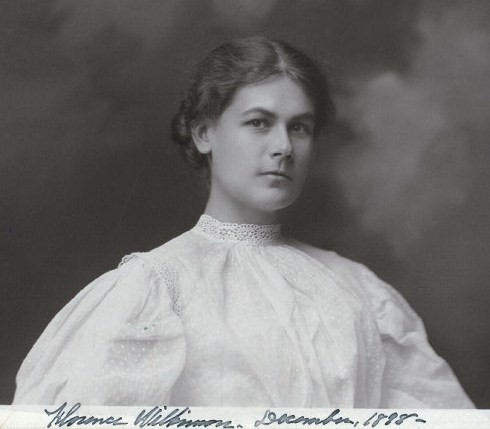 Florence Wilkinson Evans (September 6, 1878 - 1950) was an American poet and playwright.[1] The editors of Poetry, Harriet Monroe and Alice Corbin Henderson included in their 1917 selection for The New Poetry: An Anthology poems by Florence Wilkinson. According to Adrienne Munich and Melissa Bradshaw, authors of Amy Lowell, American Modern, what connects these poets is their appartenance to the queer sisterhood.

Born in Tarrytown, New York, on September 6, 1878, Florence Wilkinson studied at Chicago University and other American colleges and afterwards at the Sorbonne and the Bibliotheque Nationale of Paris. She is the author of several novels, of which the best known are: 'The Lady of the Flag Flowers', 'The Strength of the Hills', and 'The Silent Door'; and also of one or two volumes of plays, but her best work is found in her poetry of which she has written two volumes: 'The Far Country', 1906, and 'The Ride Home', 1913.

On 16 September 1909, Florence Wilkinson married Wilfred Muir Evans, an artist, born at Richmond, Surrey in 1865, son of George Evans (born 1828), manager of the Randell and Evans estate, King's Cross, London, and his wife Clara Maria, daughter of James Muir and Maria Roberts. They had one son Christopher Evans, born 1 July 1912.

In the 1910 census, Florence W. Evans is living with her husband, Wilfred M. Evans, at Riverside Drive, New York.

For the years 1910-1913 they travelled in Europe, with prolonged stays in Paris, Normandy, Florence, Italy. In 1918, Wilfred had a studio at Colebrook Road, New Jersey, USA.

In the 1920 census, Florence Evans is living with her husband, Griffin Evans, and son, Christopher Evans, in Manhattan.

They must have returned to England as Wilfred, described as a 58 year old artist, together with his wife 49 year old Florence, described as a writer, sailed for New York on the Cunard 'Benjamin' on 3 May 1924, when of 19 Endesleigh Street, London WC. Wilfred died at Herrison House, Charminster, Dorchester, Dorset on the 15 April 1947, probate being granted to Edith Marian Walker, married woman.

The New York Times described her as "a poet according to the best tradition of the New England school", and her poetry as having "the same balance, sanity, and feeling for intrinsic beauty which Emerson possessed."[2]

Her death date is undiscovered and 1950 is a circa date