Mabel Evans Dodge Sterne Luhan (née Ganson; February 26, 1879 – August 13, 1962) was a wealthy American patron of the arts, who was particularly associated with the Taos art colony. She was a member of the Heterodoxy Club.

Mabel Ganson was the heiress of Charles Ganson, a wealthy banker from Buffalo, New York, and his wife, Sarah Cook. Raised to charm and groomed to marry, she grew up among Buffalo's social elite, raised in the company of her nursemaid. She attended Saint Margaret’s Episcopal School for girls until the age of sixteen, then went to school in New York City. In 1896, she toured Europe and attended the 'Chevy Chase' finishing school in Washington, D.C. She had a passionate relationship with Violet Shillito as a teenager.

Her first marriage, in 1900 at the age of 21, was to Karl Evans, the son of a steamship owner. They were married in secret since Charles Ganson did not approve of Evans, and were later re-married in Trinity Church before Buffalo society. They had one son, but Karl died in a hunting accident two-and-a-half years later, leaving her a widow at 23.[1] In the spring of 1904, an oval portrait of her in mourning dress was painted by the Swiss-born American artist Adolfo Müller-Ury for her paternal grandmother, Nancy Ganson of Delaware Avenue, Buffalo. Her family sent her to Paris after she began an affair with a prominent Buffalo gynecologist. In November, 1904, she married Edwin Dodge, a wealthy architect.

She was also actively bisexual in her early life and frankly detailed her physical encounters with women in her autobiography Intimate Memories (1933).[2][3]

Between 1905 and 1912 the Dodges lived near Florence at her palatial Medici villa, the Villa Curonia in Arcetri where she entertained local artists, in addition to Gertrude Stein, her brother Leo, Alice B. Toklas, and other visitors from Paris, including André Gide. A troubled liaison with her chauffeur led to two suicide attempts: the first by eating figs containing shards of glass; the second with laudanum.[1] 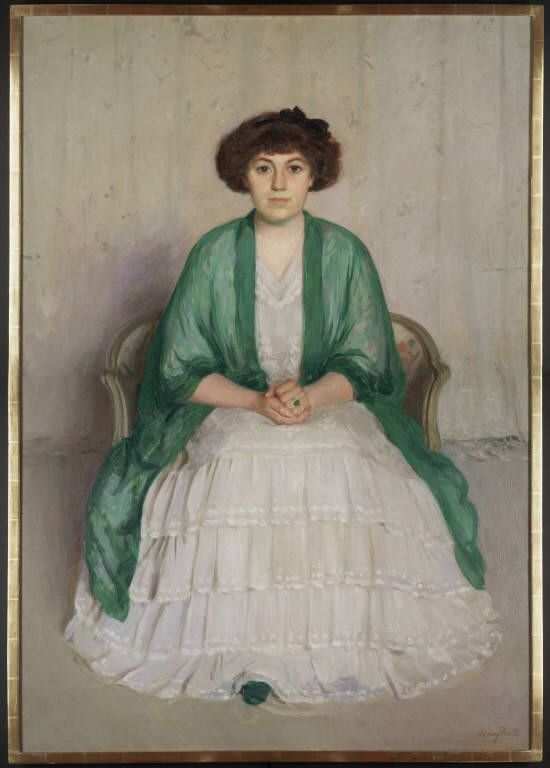 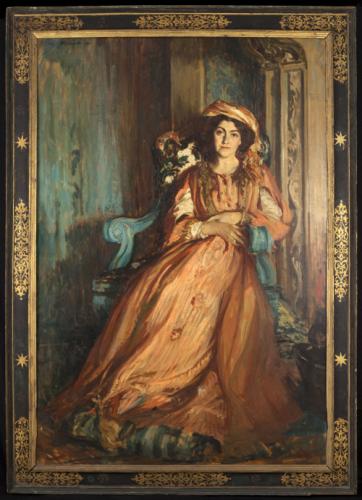 Dodge was both an artistic and personal confidante to Mina Loy, introducing her to the influential Futurist movement in Florence. The two met at Villa Curonia, marking the beginning of Loy’s “‘expansion’ into the circles gathered around…tolerant, unexacting, but gossipy Americans” in Florence during this time. Through Dodge, Loy met many artists and intellectuals, including Margaret Sanger, Gertrude Stein, and Loy’s future husband, Stephen Haweis. Loy became a regular attendee of Dodge’s salons, sharing work and companionship. Dodge was an artistic muse to whom Loy felt close, and the two lovingly referred to each other by the nicknames, “Doose” (Loy) and “Moose” (Dodge). The two also discussed Loy’s troubled and eventually ended marriage to Haweis in 1914, as well as Loy’s affairs with Marinetti and Papini. Loy often went to Dodge when she had personal or financial trouble, once stating that her friendship with Dodge served as a “great salvation”. Over time, the numerous social entanglements took a toll on Dodge, and led to a string of affairs and attempts at suicide.

In mid-1912, the Dodges (by this time increasingly estranged), returned to America where Dodge set herself up as a patron of the arts, holding a weekly salon in her new apartment at 23 Fifth Avenue in Greenwich Village. Often in attendance were such luminaries as Carl Van Vechten, Margaret Sanger, Emma Goldman, Charles Demuth, "Big Bill" Haywood, Max Eastman, Lincoln Steffens, Hutchins Hapgood, Neith Boyce, Walter Lippmann, and John Reed. Van Vechten took Dodge as the model for the character "Edith Dale" in his novel Peter Whiffle. Anthropologist Raymond Harrington introduced Dodge and her friends to peyote in an impromptu "ceremony" there.[4]

Dodge actively assisted Sanger in the development of birth control literature. Hustak explains how Dodge also “supported the Birth control League and provided her home for Sanger’s Defense Committee meetings as part of the crusade against the criminalization of birth control literature”. Dodge’s unique duality of being both a radical as well as a high society woman allowed Sanger to fully delve into her cause. It is also important to see how Dodge doesn’t ever just support a reformer she discovers; Dodge finds herself in their confidence and opens herself to conversations on their ideology. Dodge writes, “it was in talking to her at home in my sitting room that I really got something from her, something new and releasing and basic,” which conveys how she was able to support Sanger and idolize her while also being able to socialize with her. Dodge has the ability to make individuals from all different backgrounds comfortable and willing to explore radical ideas. Dodge and Sanger would eventually have a falling out in Dodge’s later days in The Village because of some of Sanger’s beliefs on limiting fertility. Dodge strongly believed in the power of the individual and believed that to limit all fertility would defeat the purpose of contraception. Dodge believed contraception’s purpose should be to give women freedom to explore sexuality as they pleased. In fact, it wasn’t long after their falling out that Sanger would be arrested, possibly because Dodge was no longer providing the location for the Birth Control League’s meetings.

She was involved in mounting the Armory Show of new European Modern Art in 1913 publishing and distributing in pamphlet-form a piece by Gertrude Stein entitled "Portrait of Mabel Dodge at the Villa Curonia", which increased her public profile.

She sailed to Europe at the end of June 1913. John Reed (Jack)—worn out from having recently organizing the Paterson Pageant—traveling with her. They became lovers after arriving in Paris, where they socialized with Stein and Pablo Picasso before leaving for the Villa Curonia, where the guests included Arthur Rubinstein. At first this was a very happy time for the couple, but tensions grew between them as Reed became uncomfortable with the affluent isolation, and Dodge saw his interests in the world of people and achievements as a rejection of her.[5] They returned to New York in late September, 1913. In October, Reed was sent to report on the Mexican Revolution by Metropolitan Magazine.[6] Although Dodge followed him to the border town of Presidio, she left after just a few days.

Between 1914 and 1916, a strong connection developed between the intelligentsia of Greenwich Village and Provincetown and, in 1915, Dodge arrived there with painter Maurice Sterne. While in Provincetown, John Reed helped to organize The Provincetown Players, and Dodge experienced a rivalry with Mary Heaton Vorse.[7]

Vanity Fair did a nostalgia piece on her in May 1915, headed with a stunning photograph by the noted portraitist Gertrude Kasebier.

In 1916, Dodge became a nationally syndicated columnist for the Hearst organization,[1] relocating to Finney Farm, a large Croton estate.[5] Sterne, who was to become Dodge's third husband, lived in a cottage behind the main house, while Dodge offered Reed the third floor of the house as a writing studio. Although he moved in for a short period, the situation became untenable; Dodge and Sterne married later that year.

In 1917 Dodge, her husband, and Elsie Clews Parsons moved to Taos, New Mexico,[9] where she began a literary colony. On the advice of Tony Luhan, a Native American whom she would marry in 1923, she purchased a 12-acre (49,000 m2) property. Luhan set up a teepee in front of her house, drumming each night in an attempt to lure her to him. Although Sterne bought a shotgun with the intention of chasing Luhan off the property, unable to use it, he instead took to insulting Dodge. In response, she sent him away, although she supported him financially until the time of their divorce four years later.[1]

D.H. Lawrence, the English author, accepted an invitation from her to stay in Taos, arriving with his wife, Frieda, in early September, 1922. He had a fraught relationship with his hostess, however, later writing about it in his fiction. Dodge later published a memoir about the visit entitled, Lorenzo in Taos (1932).

Dodge died at her home in Taos in 1962 and was buried in Kit Carson Cemetery.[12] The Mabel Dodge Luhan House has been designated a National Historic Landmark, operating as an historic inn and conference center. Natalie Goldberg frequently teaches at Mabel Dodge Luhan House, which Dennis Hopper bought after having noticed it while filming Easy Rider.

The Mabel Dodge Luhan Papers Collection—a collection of letters, manuscripts, photographs and personal papers documenting Dodge's life and works—is housed at the Beinecke Library at Yale University. A portion of the collection is available online.[13]