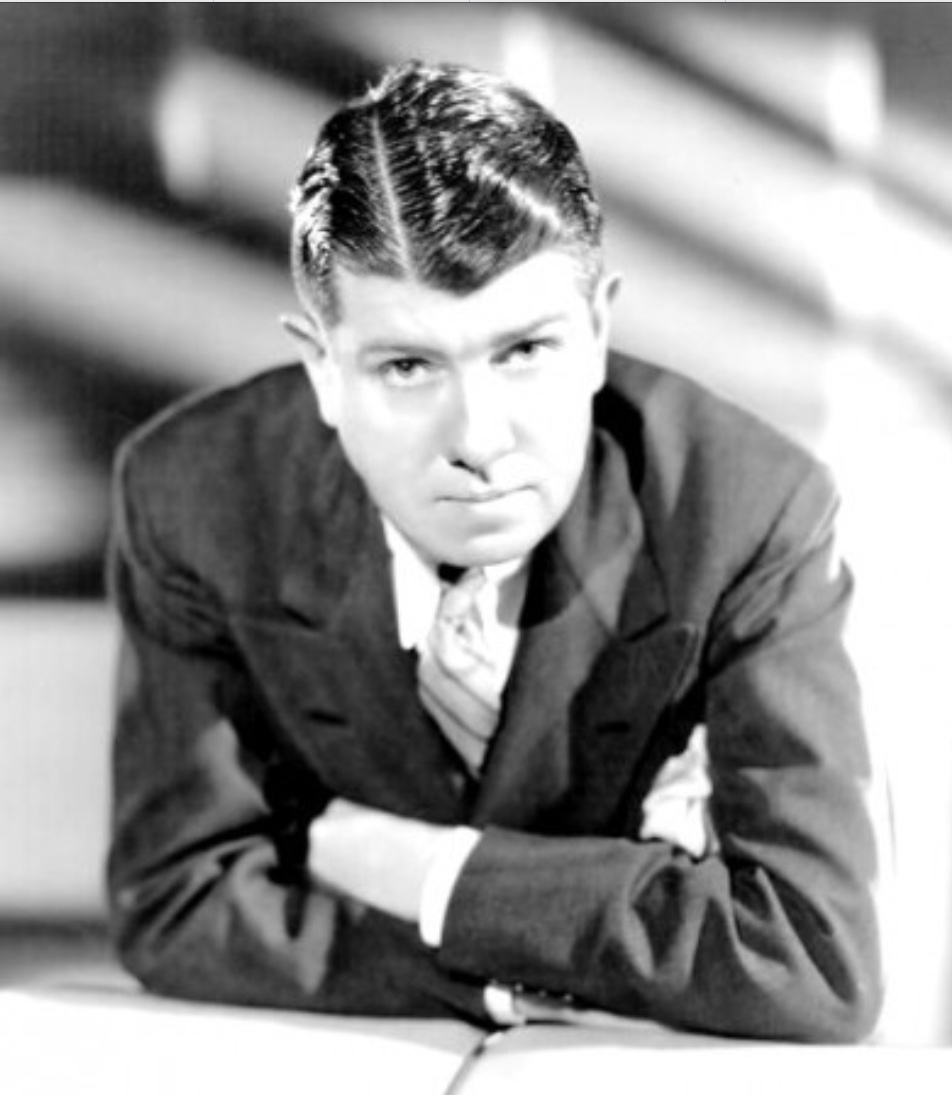 Travis Banton (August 18, 1894 – February 2, 1958) was an American costume designer. He is perhaps best known for his long collaboration with actress Marlene Dietrich and director Josef von Sternberg. He is generally considered one of the most important Hollywood costume designers of the golden age. "Designers, like Adrian and Travis Banton, were gay, but they got married and played along," William Mann said. "while Orry-Kelly refused."

Banton was born in Waco, Texas, the son of Rentfro B. Banton (1865–1949) and Margaret J. Banton (1872–1962). His parents also lived part of the year in Manhattan, where his uncle, Joab Banton, was a district attorney and one of the chief forces behing the shutdown of Mae West's play "Sex". When Travis was two, the family began living full-time in New York, where Margaret Banton indulged her son's penchant for all things dramatic. Banton was educated at Columbia University and at the Art Students League where he studied art and fashion design. There he was a pupil of the esteemed teacher Robert Kalloch, who encouraged Banton's drawings of the female form. Robert Kalloch, since at least 1931 partnered with Joseph Desmarais, taught at the School of Fine and Applied Arts in his mid-20s, helping to educate Travis Banton and Adrian. When he died in 1947, Banton paid for half of Kalloch's burial and funeral expenses.

In 1917, encouraged by Kalloch and other teachers, Banton presented some sketches to Norma Talmadge, whose production company was still based in New York. She commissioned him to design one of her gowns for her picture Poppy, costarring Eugene O'Brien.

Travis' schoolwork was interrupted by service in the navy during WWI; he enlisted in December 1917. From his military records, he doesn't appear to have been sent overseas, being stationed at the New London, CT, naval base as a seaman second-class. He was, however, awarded a Victory Medal after the war, and was honorably discharged in September 1921.

Back in civilian life, he found work with the famed Madame Frances, and his reputation as a couturier rose rapidly. He opened his own dressmaking salon in New York City, and soon was asked to create costumes for the Ziegfeld Follies. One of his creations, a dress made almost entirely of black coq feathers, caused a sensation, and predicted his later work with Marlene Dietrich. When Mary Pickford selected one of his dresses for her wedding to Douglas Fairbanks, his reputation was established.

In 1924, Travis Banton moved to Hollywood when Paramount contracted with him to create costumes for his first film, The Dressmaker from Paris, starring Leatrice Joy. Hired during Paramount's expansion of its wardrobe department, he was, like Howard Greer, a New York couturier, having worked for the famed Madame Frances.

Beginning with Norma Talmadge in Poppy, Banton designed clothing for Pola Negri and Clara Bow in the 1920s. In the 1930s and 1940s Banton designed for such stars as Kay Francis, Lilyan Tashman, Sylvia Sidney, Gail Patrick, Helen Vinson, and Claudette Colbert. Ultimately, Travis Banton may be best remembered for forging the style of such Hollywood icons as Carole Lombard, Marlene Dietrich, and Mae West. Dietrich and Banton had an especially close and successful collaboration. His work for Dietrich is still frequently referenced by designers.

Glamour, subtle elegance, and exquisite fabrics endeared Travis Banton to the most celebrated of Hollywood's beauties and made him one of the most sought-after costume designers of his era. As viewings of such films as The Gilded Lily (1935) and Desire (1936) reveal, his costume designs were marked by form-flattering cuts (often on the bias), rich fabrics (such as satin and lamé), and extravagant textures (beads, fur, and feathers). He collaborated closely with directors and actresses in order to fulfil their vision.

Shortly after Howard Greer arrived at Famous Players, he hired as an assistant a mousy little college girl by the name of Edith Head. Boyish and bespectacled, Edith had a husband, but from the start she adopted an ambiguous image of gender and sexuality. Of Mr. Head, she rarely spoke, fueling speculation throughout her life that she was a lesbian. Even a second marriage, to the set designer Wiard Ihnen, failed to derail the rumors; in fact, it was assumed by some that both were gay. "Edith liked to give the impression that it was a marriage of convenience, but it was a loving partnership," said costume historian and Head's longtime friend David Chierichetti. "I think Edith may have rather enjoyed, even encouraged, the speculation. It was helpful for designers to be gay. There was a fraternity of designers, all homosexual. Edith may have actually wanted to be considered gay, or at least to give that impression." She was embraced by Greer and later by Travis Banton, who helped boost her into a career that lasted until the 1980s. "I studied everything Howard Greer and Travis Banton did," she wrote. "They taught me constantly. I couldn't have stayed on a week without them."

"Designers were all rivals, but they were friends," recalled Chierichetti of the costume designers he knew. Photographs often show Greer and Banton socializing together; they were known to be close friends. Even the reclusive Adrian joined them occasionally. Already by the mid-1920s Banton had a reputation around Hollywood, partying late into the night with Howard Greer. "They were big drinkers and carousers. They'd pick up sailors, bring them back for parties. Everyone knew about it. They carried on with abandon."

When designer Howard Greer left Paramount, Banton was promoted to Head Designer and was responsible for dressing the studio's most illustrious stars. Marlene Dietrich, who had emerged from the lesbian demimonde of Berlin, did not try to disguise her relationship with women or her penchant for traditionally male attire. Enchanted with Banton's design of a tuxedo for her in Morocco, she asked him to design a male suit for her personal use: broad shoulders, smart lapels, collar shirt, and necktie. Travis gladly obliged. That style has become legend: Dietrich in Dishonored in a coat of monkey-fur trim, feathered hat, and long black dotted veil. Dietrich in The Devil is a Woman in angled hat, black satin ruffles, sequins, lace, and carnations. In a scene indelibly etched in the memories of generations of moviegoers, Dietrich emerges from the shadows in Shanghai Express, the enigmatic play of light and dark causing one's breath to catch in the throat.

Although Dietrich proved his pièce de résistance, Banton worked successfully with Paramount's other actresses as well. "Carole Lombard was just a tootsie when she came to Paramount," said one colleague, "but Travis saw things in her even she didn't know she had." Lombard, who counted many gay men among her close friends (at least before her marriage to Clark Gable), called Banton "Teasie," and accepted without question whatever he designed for her. He was also close friends with Lilyan Tashman, who was about as open a lesbian as the film colony ever knew, admiring her "frank and lusty interest in clothes." For Mae West, he ordered "diamonds, lots of 'em," as well as huge hats, boas, fox stoles, and tight seguined gowns to showcase her hourglass figure.

Travis Banton would have given anything for Adrian's post-studio life, but he had neither Adrian's fortitude nor determination. He seems to have been as touchy as Adrian when it came to teasing on the lot, insisting as early as 1934 that he had "no lace handkerchief in his cuff." But not so touchy that he stopped carousing: by the end of the decade, his drinking, like that of Howard Greer, led Paramount to drop him, replacing him with Edith Head.

Because of his worsening alcoholism, and according to some commentators also at the instigation of his assistant Edith Head, Banton was forced to leave Paramount.

He returned to designing privately for loyal stars and also occasionally designed for Twentieth Century-Fox from 1939-1941 and Universal from 1945–1948.

In 1941 Banton wrote to Hedda Hopper that he had few Hollywood contacts left, but he wanted her to know that he'd been doing "none of the night spots, or any of the gay life." Whatever he needed to do to get back on top, he'd do it, he assured her. In July 1942 Travis Banton married Elizabeth Ann “Biddy” Kleitz (1896-1970), an old college friend. He hoped the marriage might persuade studio moguls to take a second chance on a career ruined by drink and homosexual carousing. It didn't.

Banton's marriage didn't work; letters between Biddy Banton and Hedda Hopper reveal that, although they never divorced, they soon separated. Neither did his movie comeback prove successful. Banton would work on a number of pictures (Scarlet Street, A Double Life, Morning Becomes Electra, Auntie Mame) but always as a freelancer; his days of great influence were decidedly over. Travis Banton died in 1958, reportedly still hitting the bottle and cruising the parks for tricks.