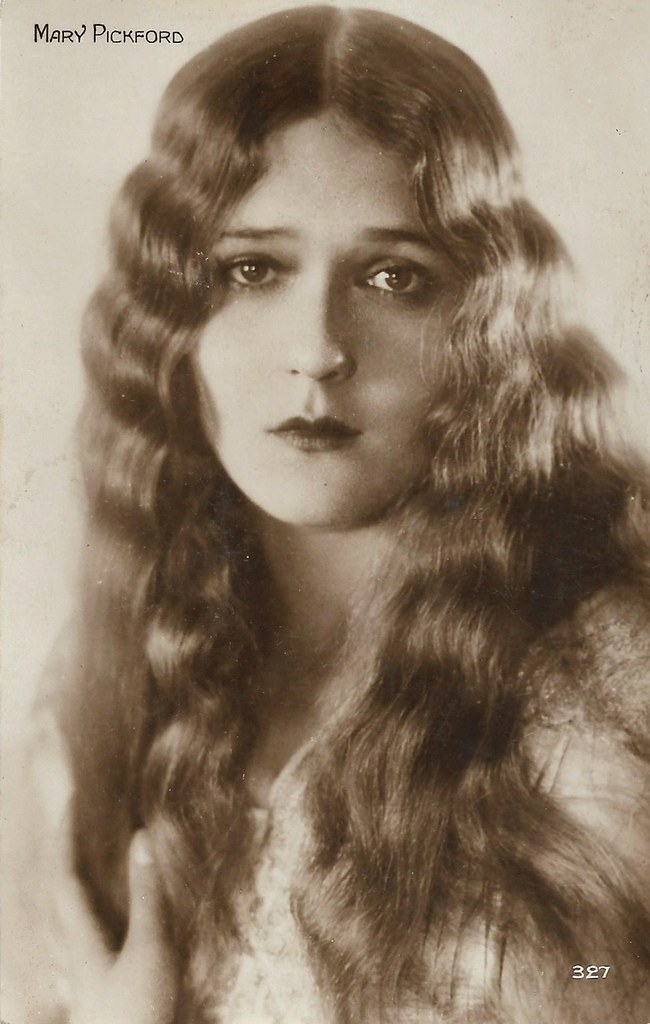 Gladys Louise Smith (April 8, 1892 – May 29, 1979), known professionally as Mary Pickford, was a Canadian-born American film actress and producer with a career spanning 50 years. She was a co-founder of the Pickford–Fairbanks Studios with Douglas Fairbanks and the United Artists studio with Fairbanks, Charlie Chaplin, and D. W. Griffith, and she was one of the 36 founders of the Academy of Motion Picture Arts and Sciences who present the yearly "Oscar" Awards ceremony.[3]

Pickford was known in her prime as "America's Sweetheart"[4][5][6] and the "girl with the curls".[6] She was one of the Canadian pioneers in early Hollywood and a significant figure in the development of film acting. She was one of the earliest stars to be billed under her own name, and was one of the most popular actresses of the 1910s and 1920s, earning the nickname "Queen of the Movies". She is credited with having defined the ingénue type in cinema.[7]

She was awarded the second Academy Award for Best Actress for her first sound film role in Coquette (1929), and she also received an honorary Academy Award in 1976 in consideration of her contributions to American cinema. The American Film Institute ranked her as 24th in its 1999 list of greatest female stars of classic Hollywood Cinema.

Pickford was married three times. She married Owen Moore, an Irish-born silent film actor, on January 7, 1911. It is rumored she became pregnant by Moore in the early 1910s and had a miscarriage or an abortion. Some accounts suggest this resulted in her later inability to have children.[1] The couple's marriage was strained by Moore's alcoholism, insecurity about living in the shadow of Pickford's fame, and bouts of domestic violence. The couple lived together on-and-off for several years.[32]

Pickford became secretly involved in a relationship with Douglas Fairbanks. They toured the U.S. together in 1918 to promote Liberty Bond sales for the World War I effort. Around this time, Pickford also suffered from the flu during the 1918 flu pandemic.[33] Pickford divorced Moore on March 2, 1920, after she agreed to his $100,000 demand for a settlement.[34] She married Fairbanks just days later on March 28, 1920. They went to Europe for their honeymoon; fans in London and in Paris caused riots trying to get to the famous couple. The couple's triumphant return to Hollywood was witnessed by vast crowds who turned out to hail them at railway stations across the United States.

The Mark of Zorro (1920) and a series of other swashbucklers gave the popular Fairbanks a more romantic, heroic image. Pickford continued to epitomize the virtuous but fiery girl next door. Even at private parties, people instinctively stood up when Pickford entered a room; she and her husband were often referred to as "Hollywood royalty". Their international reputations were broad. Foreign heads of state and dignitaries who visited the White House often asked if they could also visit Pickfair, the couple's mansion in Beverly Hills.[12]

Dinners at Pickfair became celebrity events. Charlie Chaplin, Fairbanks' best friend, was often present. Other guests included George Bernard Shaw, Albert Einstein, Elinor Glyn, Helen Keller, H. G. Wells, Lord Mountbatten, Fritz Kreisler, Amelia Earhart, F. Scott Fitzgerald, Noël Coward, Max Reinhardt, Baron Nishi, Vladimir Nemirovich-Danchenko,[35] Sir Arthur Conan Doyle, Austen Chamberlain, Sir Harry Lauder, and Meher Baba, among others. The public nature of Pickford's second marriage strained it to the breaking point. Both she and Fairbanks had little time off from producing and acting in their films. They were also constantly on display as America's unofficial ambassadors to the world, leading parades, cutting ribbons, and making speeches. When their film careers both began to flounder at the end of the silent era, Fairbanks' restless nature prompted him to overseas travel (something which Pickford did not enjoy). When Fairbanks' romance with Sylvia, Lady Ashley became public in the early 1930s, he and Pickford separated. They divorced January 10, 1936. Fairbanks' son by his first wife, Douglas Fairbanks Jr., claimed his father and Pickford long regretted their inability to reconcile.[1]

On June 24, 1937, Pickford married her third and last husband, actor and band leader Buddy Rogers. They adopted two children: Roxanne (born 1944, adopted 1944) and Ronald Charles (born 1937, adopted 1943, a.k.a. Ronnie Pickford Rogers). A PBS American Experience documentary described Pickford's relationship with her children as tense. She criticized their physical imperfections, including Ronnie's small stature and Roxanne's crooked teeth. Both children later said their mother was too self-absorbed to provide real maternal love. In 2003, Ronnie recalled that "Things didn't work out that much, you know. But I'll never forget her. I think that she was a good woman."[36]

After retiring from the screen, Pickford became an alcoholic, as her father had been. Her mother Charlotte died of breast cancer in March 1928. Her siblings, Lottie and Jack, both died of alcohol-related causes. These deaths, her divorce from Fairbanks, and the end of silent films left Pickford deeply depressed. Her relationship with her adopted children, Roxanne and Ronald, was turbulent at best. Pickford withdrew and gradually became a recluse, remaining almost entirely at Pickfair and allowing visits only from Lillian Gish, her stepson Douglas Fairbanks, Jr., and few other people. She appeared in court in 1959, in a matter pertaining to her co-ownership of North Carolina TV station WSJS-TV. The court date coincided with the date of her 67th birthday; under oath, when asked to give her age, Pickford replied: "I'm 21, going on 20."[37]

In the mid-1960s, Pickford often received visitors only by telephone, speaking to them from her bedroom. Buddy Rogers often gave guests tours of Pickfair, including views of a genuine western bar Pickford had bought for Douglas Fairbanks, and a portrait of Pickford in the drawing room. A print of this image now hangs in the Library of Congress.[31] In addition to her Oscar as best actress for Coquette (1929), Mary Pickford received an Academy Honorary Award in 1976 for lifetime achievement. The Academy sent a TV crew to her house to record her short statement of thanks – offering the public a very rare glimpse into Pickfair Manor.[38]

On May 29, 1979, Pickford died at a Santa Monica, California, hospital of complications from a cerebral hemorrhage she had suffered the week before.[42] She was interred in the Garden of Memory of the Forest Lawn Memorial Park cemetery in Glendale, California.