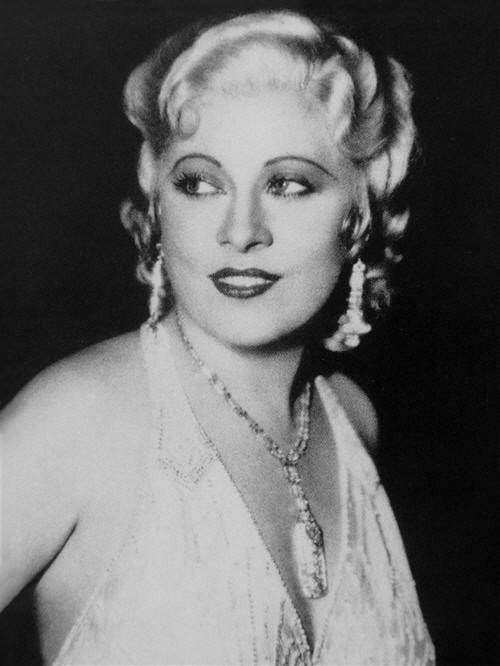 Mae West (born Mary Jane West; August 17, 1893 – November 22, 1980)[1] was an American actress, singer, playwright, screenwriter, comedian and sex symbol whose entertainment career spanned seven decades. She was known for her lighthearted, bawdy double entendres and breezy sexual independence, and often used a husky contralto voice.[2] She was active in vaudeville and on stage in New York City before moving to Los Angeles to pursue a career in the film industry.

West was one of the most controversial movie stars of her day; she encountered many problems, especially censorship. She once quipped, "I believe in censorship. I made a fortune out of it."[3][4] She bucked the system by making comedy out of conventional mores, and the Depression-era audience admired her for it. When her film career ended, she wrote books and plays, and continued to perform in Las Vegas and the United Kingdom, on radio and television, and recorded rock 'n roll albums. In 1999, the American Film Institute posthumously voted West the 15th greatest female screen legend of classic American cinema.

West was married on April 11, 1911 in Milwaukee, Wisconsin to Frank Szatkus (1892–1966),[96] whose stage name was Frank Wallace,[97][98] a fellow vaudevillian whom she met in 1909. She was 17.[99] She kept the marriage a secret,[100] but a filing clerk discovered the marriage certificate in 1935 and alerted the press.[101] The clerk also uncovered an affidavit in which she had declared herself married, made during the Sex trial in 1927.[102] At first, West denied ever marrying Wallace, but she finally admitted it in July 1937, in reply to a legal interrogatory.[103] The couple never lived together as husband and wife. She insisted that they have separate bedrooms, and she soon sent him away in a show of his own to get rid of him. She obtained a legal divorce on July 21, 1942, during which Wallace withdrew his request for separate maintenance, and West testified that Wallace and she had lived together for only "several weeks".[104] The final divorce decree was granted on May 7, 1943.[105]

In August 1913, she met Guido Deiro (1886–1950), an Italian-born vaudeville headliner and star of the piano-accordion. Her affair, and possible 1914 marriage to him, as alleged by Diero's son Guido Roberto Deiro in his 2019 book Mae West and The Count, went "very deep, hittin' on all the emotions". West later said, "Marriage is a great institution. I'm not ready for an institution yet."[106]

In 1916, when she was a vaudeville actress, West had a relationship with James Timony (1884–1954), an attorney nine years her senior. Timony was also her manager. By the time that she was an established movie actress in the mid-1930s, they were no longer a couple. West and Timony remained extremely close, living in the same building, working together, and providing support for each other until Timony's death in 1954.[107]

West remained close to her family throughout her life and was devastated by her mother's death in 1930.[108] In 1930, she moved to Hollywood and into the penthouse at The Ravenswood apartment building where she lived until her death in 1980.[109] Her sister, brother, and father followed her to Hollywood where she provided them with nearby homes, jobs, and sometimes financial support.[110] Among her boyfriends was boxing champion William Jones, nicknamed Gorilla Jones (1906–1982). The management at her Ravenswood apartment building barred the African American boxer from entering the premises; West solved the problem by buying the building and lifting the ban.[111]

In August 1980, West tripped while getting out of bed. After the fall she was unable to speak and was taken to Good Samaritan Hospital in Los Angeles, where tests revealed that she had suffered a stroke.[118] She died on November 22, 1980, at the age of 87.[119]

A private service was held at the church in Forest Lawn, Hollywood Hills, on November 25, 1980.[120][121] Bishop Andre Penachio, a friend, officiated at the entombment in the family mausoleum at Cypress Hills Abbey, Brooklyn, purchased in 1930 when her mother died. Her father and brother were also entombed there before her, and her younger sister, Beverly, was laid to rest in the last of the five crypts less than 18 months after West's death.[95][122][123]

For her contribution to the film industry, Mae West has a star on the Hollywood Walk of Fame at 1560 Vine Street in Hollywood. For her contributions as a stage actor in the theater world, she has been inducted into the American Theater Hall of Fame.[124][125] On June 25, 2019, The New York Times Magazine listed Mae West among hundreds of artists whose material was destroyed in the 2008 Universal fire.[126]