Sir William Rothenstein (29 January 1872 – 14 February 1945) was an English painter, printmaker, draughtsman, lecturer, and writer on art. Upon his frequent visits to Charles Ricketts and Charles Shannon’s home artist and writer Sir William Rothenstein paid witness to the couple’s work ethic and meticulous attention to detail, a work ethic tied to an aesthetic long since past its glory days. Rothenstein recalled how: both Shannon and Ricketts were then busy cutting woodblocks for their edition of Daphnis and Chloe, working late into the night, and rising late in the day. Bending over their blocks they looked like figures from a missal. I had never come into touch with the Morris movement, and this craftsman side was new to me. I was therefore the more impressed by their skill and patience. From them I heard countless stories of Rossetti, of Burne-Jones, Holman Hunt, Millais and Madox Brown; in fact, at the time, I thought they would carry on the Pre-Raphaelite tradition. Friend of Edward Perry Warren, Sir William Rothenstein recounted how the Lewes House was: a monkish establishment, where women were not welcomed. But Warren, who believed that scholars should live nobly, kept ample table and a well-stocked wine-cellar; in the stables were mettlesome horses, for the Downs were close at hand, and he rode daily with his friends, for the body must be as well exercised as the mind. Meals were served at a great oaken table dark and polished, on which stood splendid old silver. The rooms were full of handsome antique furniture, and of Greek bronzes and marbles in place of usual ornaments… These was much mystery about the provenance of the treasures at Lewes House. This secrecy seemed to permeate the rooms and corridors, to exhaust the air of the house. The social relations, too, were often strained, and John Fothergill longed for a franker, for a less cloistered life.

Emerging during the early 1890s, Rothenstein continued to make art right up until his death in the mid-1940s. Though he covered many subjects – ranging from landscapes in France to representations of Jewish synagogues in London – he is perhaps best known for his work as a war artist in both world wars, his portraits, and his popular memoirs, written in the 1930s. More than two hundred of Rothenstein's portraits of famous people can be found in the National Portrait Gallery collection. The Tate Gallery also holds a large collection of his paintings, prints and drawings. Rothenstein served as Principal at the Royal College of Art from 1920 to 1935. He was knighted in 1931 for his services to art. In March 2015 'From Bradford to Benares: the Art of Sir William Rothenstein', the first major exhibition of Rothenstein's work for over forty years, opened at Bradford's Cartwright Hall Gallery, touring to the Ben Uri in London later that year. 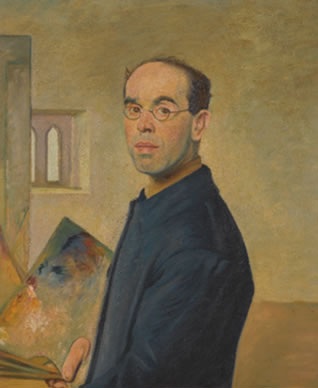 William Rothenstein was born into a German-Jewish family in Bradford, West Riding of Yorkshire where he was educated at Bradford Grammar School. His father, Moritz, emigrated from Germany in 1859 to work in Bradford's burgeoning textile industry. Soon afterwards he married Bertha Dux and they had six children, of which William was the fifth.[1] William's two brothers, Charles and Albert, were also heavily involved in the arts. Charles (1866–1927), who followed his father into the wool trade, was an important collector – and left his entire collection to Manchester Art Gallery in 1925.[2] Albert (1881–1953) was a painter, illustrator and costume designer.[3] Both brothers changed their surname to Rutherston during the First World War.[1]

Rothenstein left Bradford Grammar School at the age of sixteen to study at the Slade School of Art, London (1888–93), where he was taught by Alphonse Legros, and the Académie Julian in Paris (1889–1893), where he met and was encouraged by James McNeill Whistler, Edgar Degas and Henri Toulouse-Lautrec.[6] While in Paris he also befriended the Anglo-Australian artist Charles Conder, with whom he shared a studio in Montmartre.[1]

Rothenstein married Alice Knewstub in 1899[1] with whom he had four children: John, Betty, Rachel and Michael. John Rothenstein later gained fame as an art historian and art administrator (he was Director of the Tate Gallery from 1938 to 1964 and was knighted in 1952).[4] Michael Rothenstein was a talented printmaker.[5]

Between 1902 and 1912 Rothenstein lived in Hampstead, London, where his social circle included such names as H.G. Wells, Joseph Conrad and the artist Augustus John. Amongst the young artists to visit Rothenstein in Hampstead were Wyndham Lewis, Mark Gertler and Paul Nash.[8] During this period Rothenstein worked on a series of important paintings in the predominantly Jewish East End of London,[8] some of which were included in the influential 1906 exhibition of Jewish Art and Antiquaries at the Whitechapel Gallery.[8]

Rothenstein wrote several critical books and pamphlets, including Goya (1900; the first English monograph on the artist), A Plea for a Wider Use of Artists & Craftsmen (1916) and Whither Painting (1932). During the 1930s he published three volumes of memoirs: Men and Memories, Vol I and II and Since Fifty.[1] Men and Memories Volume I includes anecdotes about Oscar Wilde and many other friends of Rothenstein's, including Max Beerbohm, James Whistler, Paul Verlaine, Edgar Degas, and John Singer Sargent.[22]