James Abbott McNeill Whistler (July 10, 1834[1][2][3][4][5] – July 17, 1903) was an American artist, active during the American Gilded Age and based primarily in the United Kingdom. He was averse to sentimentality and moral allusion in painting, and was a leading proponent of the credo "art for art's sake". His famous signature for his paintings was in the shape of a stylized butterfly possessing a long stinger for a tail.[6] The symbol was apt, for it combined both aspects of his personality—his art was characterized by a subtle delicacy, while his public persona was combative. Finding a parallel between painting and music, Whistler entitled many of his paintings "arrangements", "harmonies", and "nocturnes", emphasizing the primacy of tonal harmony.[7] His most famous painting is Arrangement in Grey and Black No. 1 (1871), commonly known as Whistler's Mother, the revered and oft-parodied portrait of motherhood. Whistler influenced the art world and the broader culture of his time with his artistic theories and his friendships with leading artists and writers.[8]

Whistler had a distinctive appearance, short and slight, with piercing eyes and a curling mustache, often sporting a monocle and the flashy attire of a dandy.[118] He affected a posture of self-confidence and eccentricity. He often was arrogant and selfish toward friends and patrons. A constant self-promoter and egoist, he relished shocking friends and enemies. Though he could be droll and flippant about social and political matters, he always was serious about art and often invited public controversy and debate to argue for his strongly held theories.[8]

Whistler had a high-pitched, drawling voice and a unique manner of speech, full of calculated pauses. A friend said, "In a second you discover that he is not conversing—he is sketching in words, giving impressions in sound and sense to be interpreted by the hearer."[119] 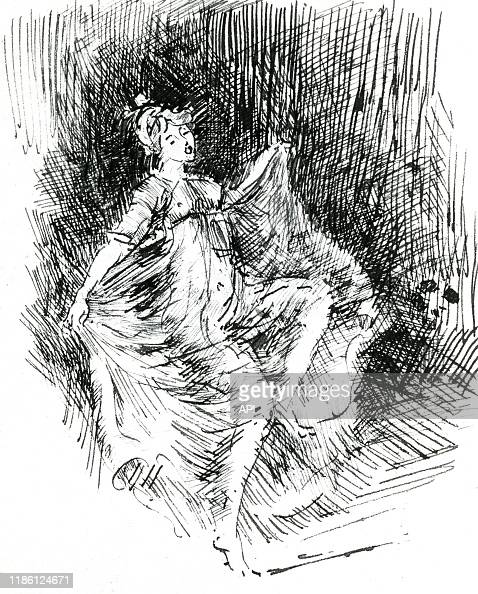 When a youthful John Singer Sargent was first launching his career, some of his closest associates were very flamboyant. Most conspicuous among them was Robert de Montesquiou - "the so-called "Prince of Decadence"" - whose incarnation of dandified aestheticism was to Paris what Oscar Wilde's was to London. Another was Samuel Jean de Pozzi, whose sexual exploits were almost as legendary as his pioneering work in the field of gynecology; both aspects of his character were dashingly suggested in Sargent's full-lenght portrait of 1881, Dr. Pozzi at Home. In the summer of 1885, Sargent have these friends (and the composer Prince Edmond de Polignac) a collective letter of introduction to Henry James, who dutifully arranged a dinner for them to meet James Abbott McNeill Whistler for a chance to see the artist's fabled "Peacock Room" in the home of Frederick Richards Leyland, a shipping magnate whose house was at 49 Prince's Gate. According to James, "on the whole nothing that relates to Whistler is queerer than anything else." That all three Frenchmen would later resurface in the masterwork A la recherche du temps perdu) of another gay writer, Marcel Proust, makes the anterior coincidence queerer still.

Whistler was well known for his biting wit, especially in exchanges with his friend and rival Oscar Wilde. Both were figures in the Café society of Paris, and they were often the "talk of the town". They frequently appeared as caricatures in Punch, to their mutual amusement. On one occasion, young Oscar Wilde attended one of Whistler's dinners, and hearing his host make some brilliant remark, apparently said, "I wish I'd said that", to which Whistler riposted, "You will, Oscar, you will!" In fact, Wilde did repeat in public many witticisms created by Whistler.[92] Their relationship soured by the mid-1880s, as Whistler turned against Wilde and the Aesthetic Movement. When Wilde was publicly acknowledged to be a homosexual in 1895, Whistler openly mocked him. Whistler reveled in preparing and managing his social gatherings. As a guest observed:

One met all the best in Society there—the people with brains, and those who had enough to appreciate them. Whistler was an inimitable host. He loved to be the Sun round whom we lesser lights revolved…All came under his influence, and in consequence no one was bored, no one dull.[120]

In Paris Whistler was friends with members of the Symbolist circle of artists, writers and poets that included Stéphane Mallarmé[121] and Marcel Schwob.[122] Schwob had met Whistler in the mid-1890s through Stéphane Mallarmé they had other mutual friends including Oscar Wilde (until they argued) and Whistler's brother-in-law, Charles Whibley.

In addition to Henri Fantin-Latour, Alphonse Legros, and Courbet, Whistler was friendly with many other French artists. He illustrated the book Les Chauves-Souris with Antonio de La Gandara. He also knew the Impressionists, notably Édouard Manet, Monet, and Edgar Degas. As a young artist, he maintained a close friendship with Dante Gabriel Rossetti, a member of the Pre-Raphaelite Brotherhood. His close friendships with Monet and poet Stéphane Mallarmé, who translated the Ten O'Clock Lecture into French, helped strengthen respect for Whistler by the French public.[123] Whistler was friendly with his fellow students at Gleyre's studio, including Ignace Schott, whose son Leon Dabo Whistler later would mentor.[124]

In 1888, Whistler married Beatrice Godwin, (who was called 'Beatrix' or 'Trixie' by Whistler). She was the widow of the architect E. W. Godwin, who had designed Whistler's White House. Beatrix was the daughter of the sculptor John Birnie Philip[125] and his wife Frances Black. Beatrix and her sisters Rosalind Birnie Philip[126] and Ethel Whibley posed for many of Whistler's paintings and drawings; with Ethel Whibley being the model for Mother of pearl and silver: The Andalusian (1888–1900).[127] The first five years of their marriage were very happy but her later life was a time of misery for the couple, because of her illness and eventual death from cancer. Near the end, she lay comatose much of the time, completely subdued by morphine, given for pain relief. Her death was a strong blow Whistler never quite overcame.[128] Whistler had several illegitimate children, of whom Charles Hanson is the best documented.[129] After parting from his mistress Joanna Hiffernan, she helped to raise Whistler's son, Charles James Whistler Hanson (1870–1935),[130] the result of an affair with a parlour maid, Louisa Fanny Hanson.[127] By his common law mistress Maud Franklin Whistler had two daughters: Ione (born circa 1877) and Maud McNeill Whistler Franklin (born 1879).[131] She sometimes referred to herself as 'Mrs. Whistler',[132] and in the census of 1881 gave her name as 'Mary M. Whistler'.[133]