After meeting Una Troubridge in 1915, Radclyffe Hall discovered the happy irony that there could be greater freedom in a lesbian relationship than in a sanctioned alliance.

As a financially independent woman, Radclyffe Hall could afford to risk social disapproval by being open about her sexuality, and she began to do so as soon as she reached maturity. However, it was not until 1918, when she began her lifelong relationship with Una Vincenzo, Lady Troubridge, the former wife of Lord Admiral Troubridge, that Hall's lesbianism became notorious. As the wife of an admiral, Una Troubridge held an important social position, and her desertion of her husband for a woman inevitably caused a scandal. 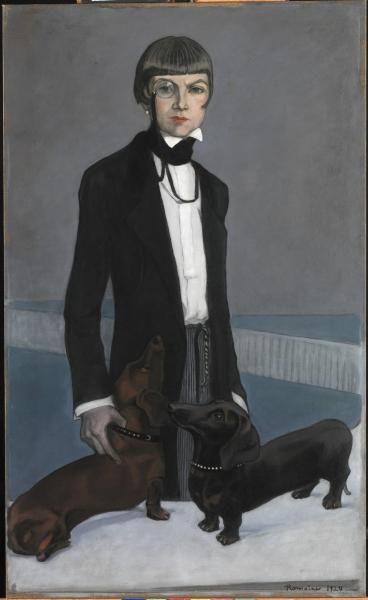 Vaslav Nijinsky as the faun from L'apres-midi d'un faune, by Una Troubridge, 1912

Una Troubridge was an educated woman with achievements in her own right. Most notably she was a successful translator and introduced the French writer Colette to English readers. Her talent as a sculptor prompted Vaslav Nijinsky to sit for her several times.[1]

Born Margot Elena Gertrude Taylor, she was the daughter of Capt. Henry (or Harry) A. Taylor. She was nicknamed Una by her family as a child and chose the middle name Vincenzo herself, after her Florentine relatives.[2] She was raised in Montpelier Square, London, and became a pupil at the Royal College of Art, and after she graduated set up a sculpture studio. Her father died in 1907, leaving her with limited financial support, and marriage became her best practical option.

She married Captain Ernest Troubridge in October 1908; they had one daughter, Andrea Theodosia Troubridge (1910-1966) who married Theodore Egerton Nicholson Warren, son of Sir Norcott Hastings Yeeles Warren, and later Douglas John Tullock Turnbull.[3] Ernest Troubridge rose to the rank of admiral during and immediately after the First World War, and Una gained her title when Admiral Troubridge was knighted in June 1919, although they were already legally separated at the time.[2] Andrea Troubridge was born on November 5, 1910 in St George Hanover Square, London, England as Andrea Theodosia Troubridge. She was an actress, known for The House in the Woods (1957), ITV Play of the Week (1955) and Deirdre (1938). She died on October 4, 1966 in Kencot, Oxfordshire, England.

Una was a devoted admirer of the Italian-Russian operatic bass Nicola Rossi-Lemeni [1920-1991], and followed his career all over the world. She later became a close friend of both Rossi-Lemeni and his wife, the soprano Virginia Zeani, and was godmother to their young son.

Hall and Troubridge met in 1915 as Troubridge's cousin, singer Mabel Batten (aka Ladye), was Hall's lover at the time. Batten died in 1916, and Hall and Troubridge moved in together the following year. In the early 1920s, Troubridge and Hall's home was at 10 Stirling Street, London, near where Troubridge had grown up. The property was extensively renovated by the two.[4] She wrote about the intensity of their relationship in her diary: "I could not, having come to know her, imagine life without her."[5][6]

In an effort to ease the great sense of guilt about Mabel's death Hall and Troubridge became interested in spiritualism. They regularly held seances with the use of a medium and believed that they received advice from Mabel, from beyond the grave.[7] Both Troubridge and Hall identified as "inverts",[8] a term used by sexologists such as Krafft-Ebing and Havelock Ellis usually to connote what is regarded as homosexuality.

The couple raised and showed dachshunds and griffons. The dachshunds shown in the Romaine Brooks portrait of Troubridge were a prize-winning pair given to her by Hall.[9] In the last nine years of her life Hall had become obsessed with a White Russian nurse, Evgenia Souline, a relationship which caused Troubridge unhappiness, but which she nonetheless tolerated. Initially the women had decided to move to Italy and live in Florence, but were forced to return at the outbreak of WWII. The three chose to live in Devon.

Despite all their troubles, Troubridge stayed with Hall and nursed her until she died in 1943. In the early 1920s Troubridge adopted a tailored style similar to Hall's own masculine look, as a way of making her sexual identity and their partnership visible. Later she came to prefer more feminine dress that complemented Hall's.[10] After Hall died of bowel cancer in 1943, Troubridge had Hall's suits altered to fit her and wore them habitually.[11]

On her deathbed, Hall revoked a previous will that had provided Souline with an income, and instead left everything to Troubridge, including the copyrights to her works. In her new will she asked Troubridge to "make such provision for our friend Eugenie Souline as in her absolute discretion she may consider right"; Troubridge provided Souline with only a small allowance. She burned Souline's letters. In her 1945 biography, The Life and Death of Radclyffe Hall, she minimized Souline's role in Hall's life.[12] Souline died in 1958.

Troubridge died in Rome in 1963; she had left written instructions that her coffin be placed in the vault in Highgate Cemetery where Hall and Batten had been buried, but the instructions were discovered too late.[13] She was buried in the English Cemetery in Rome, and on her coffin is inscribed "Una Vincenzo Troubridge, the friend of Radclyffe Hall". Recently her tomb was removed, and her remains got lost.