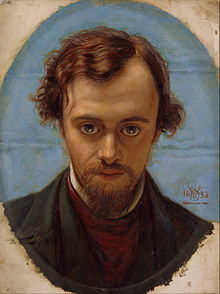 Gabriel Charles Dante Rossetti (12 May 1828 – 9 April 1882), generally known as Dante Gabriel Rossetti,[1] was a British poet, illustrator, painter and translator. He founded the Pre-Raphaelite Brotherhood in 1848 with William Holman Hunt and John Everett Millais. Rossetti was later to be the main inspiration for a second generation of artists and writers influenced by the movement, most notably William Morris and Edward Burne-Jones. His work also influenced the European Symbolists and was a major precursor of the Aesthetic movement.

Rossetti's art was characterised by its sensuality and its medieval revivalism. His early poetry was influenced by John Keats. His later poetry was characterised by the complex interlinking of thought and feeling, especially in his sonnet sequence, The House of Life. Poetry and image are closely entwined in Rossetti's work. He frequently wrote sonnets to accompany his pictures, spanning from The Girlhood of Mary Virgin (1849) and Astarte Syriaca (1877), while also creating art to illustrate poems such as Goblin Market by the celebrated poet Christina Rossetti, his sister.

Rossetti's personal life was closely linked to his work, especially his relationships with his models and muses Elizabeth Siddal, Fanny Cornforth and Jane Morris.

The savage reaction of critics to Rossetti's first collection of poetry contributed to a mental breakdown in June 1872, and although he joined Jane Morris at Kelmscott that September, he "spent his days in a haze of chloral and whisky".[49] The next summer he was much improved, and both Alexa Wilding and Jane sat for him at Kelmscott, where he created a soulful series of dream-like portraits.[49] In 1874, Morris reorganised his decorative arts firm, cutting Rossetti out of the business, and the polite fiction that both men were in residence with Jane at Kelmscott could not be maintained. Rossetti abruptly left Kelmscott in July 1874 and never returned. Toward the end of his life, he sank into a morbid state, darkened by his drug addiction to chloral hydrate and increasing mental instability. He spent his last years as a recluse at Cheyne Walk.

On Easter Sunday, 1882, he died at the country house of a friend, where he had gone in a vain attempt to recover his health, which had been destroyed by chloral as his wife's had been destroyed by laudanum. He died of Bright's Disease, a disease of the kidneys from which he had been suffering for some time. He had been housebound for some years on account of paralysis of the legs, though his chloral addiction is believed to have been a means of alleviating pain from a botched hydrocele removal. He had been suffering from alcohol psychosis for some time brought on by the excessive amounts of whisky he used to drown out the bitter taste of the chloral hydrate. He is buried at Birchington-on-Sea, Kent, England.[50] His grave is visited by admirers of his life's work and achievements as seen by fresh flowers placed there regularly.