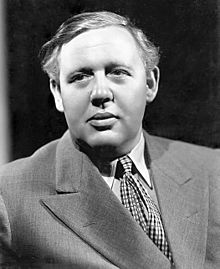 Charles Laughton (1 July 1899 – 15 December 1962) was an English stage and film actor, director, producer and screenwriter. Laughton was trained in London at the Royal Academy of Dramatic Art and first appeared professionally on the stage in 1926. In 1927, he was cast in a play with his future wife Elsa Lanchester, with whom he lived and worked until his death. Charles Laughton began by compartmentalizing sexuality from the rest of his life, only to become more accepting of it as he got older: Laughton would, late in life, tell his wife Elsa Lanchester he preferred spending time with Christopher Isherwood and Don Bachardy because they were of his "own kind".

He played a wide range of classical and modern parts, making an impact in Shakespeare at the Old Vic. His film career took him to Broadway and then Hollywood, but he also collaborated with Alexander Korda on notable British films of the era, including The Private Life of Henry VIII. He portrayed everything from monsters and misfits to kings.[1] Among Laughton's biggest film hits were The Barretts of Wimpole Street, Mutiny on the Bounty, Ruggles of Red Gap, Jamaica Inn, The Hunchback of Notre Dame, and The Big Clock. In his later career, he took up stage directing, notably in The Caine Mutiny Court-Martial, and George Bernard Shaw's Don Juan in Hell, in which he also starred. He directed one film, the thriller The Night of the Hunter.

Laughton has been seen by one actor as one of the greatest performers of his generation. Daniel Day-Lewis cited him as one of his inspirations, saying: "He was probably the greatest film actor who came from that period of time. He had something quite remarkable. His generosity as an actor, he fed himself into that work. As an actor, you cannot take your eyes off him."[2]

In 1927, Laughton began a relationship with Elsa Lanchester, at the time a castmate in a stage play. The two were married in 1929, became US citizens in 1950, and remained together until Laughton's death.

After making Journey’s End (1930), James Whale continued directing films in Hollywood for just over a decade. He enjoyed Hollywood, and a long-term contract with Universal that paid him well. In her autobiography the character actress Elsa Lanchester, who worked with Whale, recalled that Charles Laughton, who was a closeted and self-loathing homosexual, shared her opinion of Whale’s talents as a film director, but thought him vulgar and a snob. Laughton referred to him as The Would-Be Gentleman, taken from the title of a play Whale had once acted in. Said Lanchester: ‘Jimmy Whale said, “You will love it here in Hollywood, Charles. I’m pouring the gold through my hair and enjoying every minute of it!” Charles was horrified by that. But Jimmy did love money. He came from a poverty-stricken family.’

In 1932 Laughton portrayed the cruel, jealous Commander Sturm in The Devil and the Deep. He played the character as a man bordering on insanity, who drives his wife, Tallulah Bankhead, to adultery with Gary Cooper.

Over the years, they appeared together in several films, including Rembrandt (1936), Tales of Manhattan (1942) and The Big Clock (1948). Lanchester portrayed Anne of Cleves, Henry VIII's fourth wife, opposite Laughton in The Private Life of Henry VIII. They both received Academy Award nominations for their performances in Witness for the Prosecution (1957)—Laughton for Best Actor, and Lanchester for Best Supporting Actress—but neither won.

Laughton's first, meaningful homosexual relationship was with David Roberts, a handsome young actor whom Laughton met in 1941. Their relationship lasted ten years, until 1950, when Laughton was performing in The Cherry Orchard in England. After their relationship ended, Roberts remained friends with Laughton and served as pallbearer at his funeral.

In 1951, Laughton and Paul Gregory produced a concert reading tour of Don Juan in Hell, taken from George Bernard Shaw's Man and Superman. Laughton directed and played the Devil, with Charles Boyer as Juan, Cedric Hardwicke as Statue, and Agnes Moorehead as Dona Ana. After this success, Laughton and Gregory organized a reading tour of John Brown's Body (1953). Laughton adapted Stephen Vincent Benet's poem for the stage. The company consisted of Tyrone Power, Judith Anderson, and Raymond Massey, all playing multiple roles, with Laughton as director.

In 1959, while at Stratford-upon-Avon, Laughton met Bruce Ashe (aka Peter Jones, real name Terry Jenkins) and fell in love for the first time. Ahse was a classically proportioned photographer's model and aspiring actor. When the season ended, he accompanied Laughton to Italy for the filminh of Under Ten Flags (1960). Their relationship lasted until Laughton's death four years later. Terry was not there when Charles died. Christopher Isherwood wrote to him in New York, where he was, that he should stay away, that Charles was in a coma, that things had become messy. He suggested that Terry should stay away from the funeral, too, which he did, and didn't even see Charles' tomb at Forest Lavm for some months. By then, he had married, but the marriage laster just over five years.

Although Laughton's bisexuality has been corroborated by several of his contemporaries and is generally accepted by Hollywood historians,[18][19][20][21] actress Maureen O'Hara, a friend and co-star of Laughton, has disputed the contention that his sexuality was the reason Laughton and Lanchester did not have children. O'Hara claimed Laughton told her that he had wanted children but that it had not been possible because of a botched abortion that Lanchester had early in her career of performing burlesque.[22] In her autobiography, Lanchester acknowledged two abortions in her youth—one of the pregnancies purportedly by Laughton—although she didn't mention whether she had been rendered infertile. According to her biographer, Charles Higham, the reason she did not have children was that she did not want any.[23]

Laughton owned a spectacular estate on the bluffs above Pacific Coast Highway at 14954 Corona Del Mar in Pacific Palisades.[24] The property suffered a landslide in 1944, alluded to by Bertolt Brecht in his poem "Garden in Progress".[25]