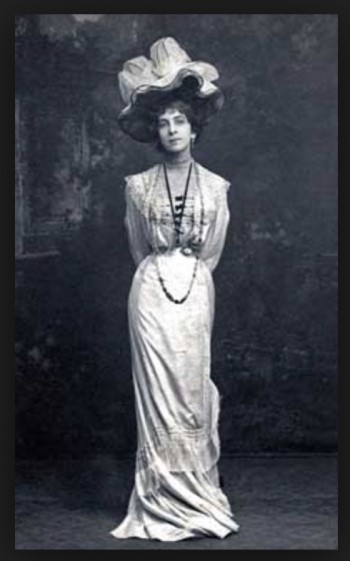 Violet Gordon-Woodhouse (23 April 1872 – 9 January 1948) was a British keyboard player. She specialised in the harpsichord and clavichord, and was influential in bringing both instruments back into fashion. She was the first person to record the harpsichord, and the first to broadcast harpsichord music.[1]

Violet Kate Eglinton Gwynne was born at 97 Harley Street, St Marylebone, London, into a wealthy family with an estate in Sussex, England. She was the second daughter and fourth of seven children of James Eglinton Anderson Gwynne (1832–1915), an engineer, inventor, and landowner, and Mary Earle Purvis (1841–1923). Her mother was a friend of soprano Adelina Patti. Violet became a pupil of the country's leading piano teacher, Oscar Beringer, a German émigré, and by the age of sixteen she was one of his most promising pupils.[2]

Violet's maternal grandfather, Royal Navy officer and merchant William Purvis (1796–1854) from Dalgety Bay, Scotland, married Cornelia Louisa Intveld (1808–1857) in 1822.[3] Intveld was a noted soprano and a great beauty of her era. Upon glimpsing her across the auditorium at the opera in London, King William IV sent his equerry to invite her to his box. When she refused, the King sent the equerry back just to ask her name.[4] Cornelia Louisa Intveld was born in Padang where her father, who came from humble beginnings in Hellevoetsluis, South Holland, rose up through the Dutch East India Company to become the Dutch Resident of Padang. Her maternal grandmother was an Ono Niha ranee (a term that covered every rank from chieftain's daughter to princess) who married a prominent Dutch colonial official and merchant. This "foreign blood" caused opposition to Violet Gordon-Woodhouse's father's family to her parents' marriage and so they eloped.[5]

Violet broke off an engagement to a wealthy Sussex neighbour, Viscount Gage, after human sexuality was explained to her.[7] In 1895 she entered into a mariage blanc with Gordon Woodhouse. She persuaded her husband to adopt the hyphenated surname Gordon-Woodhouse.[8] His reasons for entering into the marriage are unclear. In 1899, William Reginald Shute, 10th Viscount Barrington (heir to a viscountcy) moved into the marital house, joined later by Max Labouchere and Denis Tollemache. This arrangement was referred to in society circles as the "Woodhouse circus".

However, it was not just men who seemed to be drawn to Violet throughout her life but women too. A string of women appearedin Violet’s life and seemedto become utterly devoted to her. Adelina Granz accompanied Violet and Gordon on their honeymoon and was referred to as ‘that woman’ by Bill and Gordon. Ethel Smyth, who gave Violet a copy of the infamous Classical lesbian poet Sappho. There was also Radclyffe Hall, specialized in tempting wives away from their husbands, and dedicated her book of poetry The Forgotten Island to Violet. The extent of Violet’s relationship to these women is disputed, some believe there must have been a sexual element, but ultimately it is unknown.

Originally, Violet played the piano, but she rose to fame playing the harpsichord and clavichord. An important influence on her was Arnold Dolmetsch, a pioneer of the early music revival, who began making copies of old keyboard instruments in the 1890s. Dolmetsch supplied Violet with instruments and gave her instruction on how to play them. In 1899 Violet performed Bach's Concerto for Three Harpsichords in C at a public concert in London.[9] The other two harpsichordists in the Bach were Elodie Desirée (the second Mrs Dolmetsch) and Dolmetsch himself. Dolmetsch worked abroad in the early-20th century, but Violet resumed her collaboration with him in 1910.

As well as early music repertoire, Violet played music by nineteenth century composers and living composers such as Delius, who dedicated a harpsichord piece to her.

After the First World War, Violet, who did not receive anything in her father´s will, found herself relatively short of money. This may have been a factor in her deciding to sign a recording contract.

By the 1920s, Violet and Gordon acquired Nether Lypiatt Manor in Gloucestershire, where they lived with Barrington (known as "Bill"). Finances improved after Gordon received an inheritance in 1926. Violet reduced her public performances.

In the 1930s she taught the Australian keyboard player Valda Aveling.[10]

She was close to many of the leading artists of her day, including Siegfried Sassoon, Irene, Lady Dean Paul (also known as Poldowski), and George Bernard Shaw. Welsh tramp poet W. H. Davies often visited her harpsichord recitals and also dined, with the Sitwells, at Nether Lypiatt.[12]

Gordon-Woodhouse is claimed to be the first person recorded playing the harpsichord in 1920. Some of her recordings have been released on CD. The composers featured include J.S. Bach.[9][13]

Violet also made clavichord recordings, but she was not the first person to record the instrument, an honour that appears to belong to Arnold Dolmetsch.[14][13]