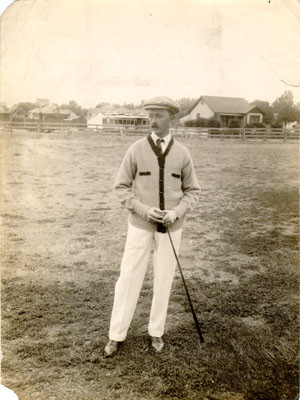 Charles Templeton Crocker (September 2, 1884 - December 12, 1948) was a past president of the California Historical Society and a member of the board of directors for over twenty years. He also wrote the first American opera that was produced in Europe; helped popularize French Art Deco in America; and funded and headed expeditions with the California Academy of Sciences and other academic institutions aboard his personal yacht Zaca. The town of Templeton is named after him.

Charles Templeton Crocker was born September 2, 1884 in San Francisco, California, the only son and second (of three) children born to Charles "Fred" Frederick Crocker and Jennie Easton; Templeton's paternal grandfather was Charles Crocker, one of the Big Four railroad magnates. Both parents died when he and his sisters were young: their mother died shortly after the birth of the youngest sister, Jennie, in 1887,[1] and their father died in 1897.[2] The three Crocker siblings continued to live in the family's Hillsborough estate Uplands with their maternal grandmother, Adeline Easton. Their parents had left them an $8 million fortune,[3] which was put in trust and distributed to each in turn when they came of age; Mary, the eldest, inherited her share in 1899.[4] Templeton survived significant injuries and illnesses when he was younger, including a grave fever when he was six,[5] an accident involving a stair bannister a few months later,[6] and fracturing both legs after being thrown by his horse when he was seventeen.[7] By the time Templeton received his $5 million share upon turning 21 years old in 1905, the siblings' collective inheritance had grown to $15 million with investments.[8] Templeton and his younger sister Jennie received an additional $4 million inheritance in 1910 upon the death of their uncle George.[9] Templeton attended the Westminster School, graduating in 1903, and went on to attend Yale (graduating in 1908);[10] Cole Porter was among his friends there. Upon his graduation, he returned to San Francisco and lived in the family's thirty-seven-room Italian villa on their 118-acre (48 ha) estate in Hillsborough.[11] The three Crocker siblings had inherited the Uplands estate upon their father's death; following Mary's untimely death in 1905[12] and Jennie's purchase of the Tevis estate in 1910, the property became Templeton's sole posession.[13] Templeton married Helene Irwin, daughter of the Hawaiian sugar baron William G. Irwin, at the Irwin family home in San Francisco on February 28, 1911.[14] At the time of their marriage, the couple's combined net worth was estimated at $28 million.[15] Shortly after they were married, Templeton hired noted architect Willis Jefferson Polk to design a new mansion for the site as a wedding present for his wife.[16] Work began on the new mansion, named Uplands II, in 1913 and was completed in 1917.[17][18][19]:15 Outdoor scenes for the motion picture Gimme were filmed by Rupert Hughes at Uplands II in 1922;[20] the salaries of the society women who served as extras and the rental fee for the grounds were donated to charity.[21]

The multi-faceted multi-millionaire made history as a librettist. He wrote the lyrics for an opera entitled The Land of Happiness, a Chinese fantasy-extravaganza set to music by composer (and Southern Pacific attorney) Joseph Deighn Redding which premiered on August 4, 1917 at the Bohemian Grove.[32][33]:3 After the success of this opera, Crocker was encouraged to mount an ambitious, professional production. While visiting Bohemian Grove in 1921, the well-known soprano Mary Garden accepted the opera with the intention to produce it in Chicago,[34] but it would take several more years to make its public debut. After the end of World War I, Crocker and Redding visited Paris in search of talent to design and produce his opera, by then renamed to Fay-Yen-Fah. They created a partnership with Russian impresario Sergei Diaghilev, founder of the Ballets Russes. Diaghilev hired a youthful George Balanchine as choreographer.[11] Dancers included legends Ninette de Valois and Alexadra Danilva. The brilliant dancer/painter Hubert Julian "Jay" Stowitts, aka “America’s First Ambassador of International Culture,” was employed to create authentic and sumptuous costumes and sets. The research and development phase of the project took three full years. In February 1925, Crocker and Redding traveled to Monte Carlo where their opera had its European premiere at the Opéra de Monte Carlo.[35] It was the first time in the history of music that a full-length opera composed by an American, on a libretto written by an American, was produced in Europe. [36] In mid-January 1926, Gaetano Merola, founding director of the San Francisco Opera Company, gave Fay-Yen-Fah its American debut at the Columbia Theater,[37][38] which also marked the start of the 1926 opera season in San Francisco.[39] San Francisco society appeared in large numbers, making the performance a dazzling success. Redding and Crocker received the Ribbon of the Legion of Honor from France for the opera in 1926. A music critic from the San Francisco Chronicle praised Crocker and Redding’s accomplishment, calling the opera “a refreshing breeze in a hothouse of artificiality.” Crocker brought it back to Monte Carlo in 1932 with Balanchine and Stowitts and danseuse Tamara Toumanova in the principal role. It was revived in the spring of 2009, again in Monte Carlo, for a special performance using the original costumes. Two hundred members of the Bohemian Club came to the opening.

Templeton was one of the millions of fair-goers who became enamored with the geometrical motifs of Art Deco at the Paris Exposition of 1925. He would return to France a few years later to commission fashionable furnishings and objects for his penthouse apartment in the Russian Hill neighborhood of San Francisco. The prominent apartment building at 945 Green Street, completed in 1928, was part of a notable "spite war"; when the 12-storey building at 947 Green had been completed a few years earlier, it spoiled the views from an older property at 973 Green, and the owners of 973 retaliated by constructing the 15-storey 945 to completely obstruct the views east from 947.[44][45] Templeton hired none other than Jean-Michel Frank, Pierre Legrain, Jean Dunand and Madame Lipska to execute the decor for his modernist apartment. French Art Deco at this level was rare in the United States at the time and rarer still in the hills of San Francisco. Crocker ordered wall reliefs, screens, furniture and accessories — some 400 objects in all.[46] Dunand, still widely considered the most important designer of French Art Deco, was charged with finishing Crocker's bedroom, dining room, and breakfast room.[47] The Crocker/Dunand collaboration was ground breaking. When everything was installed and his divorce from sugar heiress Helene Irwin became final, Templeton, nicknamed “Prince Fortunatus” by his classmates at Yale, moved into the apartment with longtime friend and valet-butler Thomas Thomasser. Thomas, Templeton and his Green Street apartment became the talk of the city’s social elite. The building sat atop a steep flight of steps. The glass-enclosed penthouse offered spectacular vistas of San Francisco Bay. Guests marveled at Crocker’s stunning aquariums of exotic tropical fish, dramatically lit and set beneath the level of the floor. Shark and camel skinned furniture highlighted the living room, while sheepskins served as wall hangings. The dining table, composed of crushed eggshells, was baked and carefully lacquered. Especially alluring, Crocker’s personal bathroom, had been built around a semicircular black tub with matching toilet fixtures. Vogue Magazine declared in 1929 that it was, “perhaps the most beautiful apartment in the world.”[48] It was the French master’s most important commission in the United States and one of the earliest luxury apartments in America completed in the modern style. [49] Templeton made a sizeable mark in art history as an early innovator in bringing the French Art Deco movement to the U.S. After Crocker's death in 1948, the apartment was maintained as it had been during his life. Eventually, his heirs dismantled the apartment and sold off the furnishings,[47] and when the apartment itself was sold in 1999,[50] the decorative wall panels were removed. The breakfast room panels (by Dunand) were acquired by the jeweler Fred Leighton, who used them in his VIP salon and viewing room; they were subsequently exhibited by Maison Gerard at the Winter Antiques Show in 2013–14.[51][52] Most of the bedroom furniture has since been donated to the Metropolitan Museum of Art;[47][53][54][55][56][57][58] however, the bedroom panels are believed to be lost.[59]

Templeton devoted himself intermittently to the management of the St. Francis Hotel on Union Square, which the Crocker family financed and built just before the Earthquake. Crocker and his sister Jennie deeded the land for the new north wing in 1912;[60] Templeton himself was credited with redesigning the double-width north wing in 1909 after the original extension was criticized strongly.[61] After Dan London became the manager of the St. Francis in 1937, he, Crocker, and Crocker's nephew decided to hire brilliant San Francisco architect Timothy Pflueger to turn the existing ground-level restaurant into a sleek and curvaceous Art Deco lounge. The resulting "Patent Leather Room" was unveiled in 1939, with furniture finished in patent leather; however, the press and public dubbed it "Coffin Corner" or "The Black Hole".[27] Ansel Adams was hired to take publicity shots.[62] The Crockers sold their interest in the St. Francis in 1944 to a group led by Benjamin Swig[63] and the Patent Leather Room was replaced by the "Terrace Room" in 1953.[64]

Irwin and Crocker announced their intention to divorce in 1927, with Irwin alleging cruelty, long absences from home, and neglect;[22] the divorce was finalized in 1928[23] and Crocker decamped to his new San Francisco apartment, selling the mansion in 1942 to Romie C. Jacks, the son of David Jacks, who popularized Monterey Jack cheese.[24][25] Uplands II was temporarily rented in 1951 to a Soviet delegation, including Deputy Foreign Secretary Andrei Gromyko, who were attending the Japanese Peace Conference that year.[26] Jennie Crocker repurchased Uplands II in 1956 for $95,000 and assisted the Trustees of Crystal Springs School in acquiring it for Crystal Springs Uplands School, where it serves as the main building for the private high school.[25] The mansion is one of three prominent examples of Beaux-Arts architecture in Hillsborough, along with Carolands and La Dolphine.[19]:15–18 The original Uplands I was sold to C.J. Lindgren and moved to a new site approximately 350 yards (320 m) north from its original location in 1915. Reportedly, Lindgren was given the house for free, conditioned on its successful removal.[25] It is still standing at 401 El Cerrito Avenue, near the intersection with Poett Road, albeit with significant alternations; when it was owned by George Randolph Hearst, who purchased it in 1927, he hired Julia Morgan to remodel it.[19]:14

On December 12, 1948, Crocker died in his suite at the St. Francis Hotel in San Francisco after a long illness.[10] After suffering a stroke, Crocker lived the last four years of his life at the hotel.[27] Funeral services were held at St. Matthew's Episcopal Church in San Mateo, after which he was interred at Cypress Lawn Memorial Park.[28]

Templeton was the grandson of Charles Crocker, one of the four chief builders of the western portion of the Transcontinental Railroad. His uncles were banker and investor William H. Crocker, president of the Crocker Bank and George Crocker, second vice-president of the Southern Pacific Railroad. His mother's family were also prominent citizens on the San Francisco Peninsula: his maternal grandparents, Ansel I. and Adeline Easton (nee Mills) survived the sinking of the SS Central America off Cape Hatteras during their honeymoon in 1857.[1] Adeline's brother Darius Ogden Mills,[29] for whom the city of Millbrae is named, was once credited as California's richest citizen. His brother-in-law, via marriage to his eldest sister Mary, was Francis Burton Harrison.[29] The first husband of his younger sister Jennie was national tennis champion Malcolm Whitman;[30] after their divorce, Jennie married businessman Robert Henderson. Templeton's uncle (his mother's brother) Ansel Mills Easton[1] was married to Louise Adams; Louise's brother Charles Adams was the father of famed photographer Ansel Easton Adams, making Ansel Adams a cousin by marriage. One cousin was the mystic, princess and author Aimee Crocker. His great uncle Edwin B. Crocker built Sacramento's Crocker Art Museum.