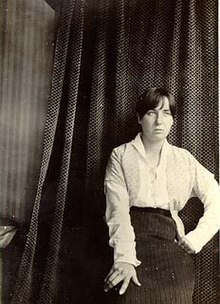 Marcel Moore (19 July 1892 – 19 February 1972), born Suzanne Alberte Malherbe, was a French illustrator, designer, and photographer. She, along with her romantic and creative partner Claude Cahun, was a surrealist writer and photographer.[1] Artist Liv Schulman created a series of films: Le Goubernement, a six-episode fiction imagining the destiny and work of women, lesbian, queer, trans and non-binary artists who lived in Paris from 1910 – 1980. The episodes traverses and overlay over 70 years of history and hosts the stories and fate of artists that were erased from the great twentieth century modernist narrative including Suzanne Malhberbe.

Moore was born Suzanne Alberte Malherbe in Nantes, France on 19 July 1892,[2] and studied at the Fine Arts Academy in Nantes. In 1909, at age seventeen, Malherbe met fifteen-year-old Lucie Schwob and began a lifelong artistic collaboration.[3] Malherbe's widowed mother married Schwob's divorced father in 1917. Curator Tirza True Latimer has theorized that this step-sister relationship not only encouraged the young ladies' creative collaborations but also diverted attention from their lesbian relationship. Between 1920 and 1937, they lived in Paris, where they became involved with the surrealism movement and contributed to avant-garde theater activities.[4] They took gender-neutral pseudonyms: Malherbe became Marcel Moore, and Schwob became Claude Cahun.[5] Cahun described Moore as "''l'autre moi''" (the other me), and they remained together until Cahun's death in 1954.

In her early twenties Moore worked as a graphic designer, producing ornate illustrations influenced by the japonism trend and the Paris fashion scene of the 1910s. Her modern fashion designs were published in the newspaper ''Phare de la Loire'', owned by the Schwob family. She also collaborated with the poet Marc-Adolphe Guégan, producing illustrations for two of his books: ''L'Invitation à la fête primitive'' (1921) and ''Oya-Insula ou l'Enfant à la conque'' (1923).[6]

Marcel Moore is best known as Claude Cahun's collaborator. Cahun's photographic oeuvre, all but forgotten for a few decades, was rediscovered in the 1980s and interpreted as a predecessor of Cindy Sherman's theatrical self-portraits.[7] However, recent scholarship suggests that Moore was not only a muse but also had an active hand in the creation of some of Cahun's best-known works. In an essay for the 2005–2006 exhibition ''Acting Out: Claude Cahun and Marcel Moore'' at the Frye Art Museum in Seattle, curator Tirza True Latimer argues that Claude Cahun's own photographs are not so much "self-portraits" as collaborations with Marcel Moore. At times, the women photographed each other posing alternately in the same tableau. Moore's shadow is visible in some photographs of Cahun, making visible her own role behind the camera.

Moore illustrated Cahun's creative writing on several occasions. For Cahun's 1919 poetry volume ''Vues et visions'', Moore created pen-and-ink illustrations similar to the decorative style of Aubrey Beardsley.[8] Moore was the subject of Cahun's dedication, "I dedicate this puerile prose to you, so that the entire book will belong to you and in this way your designs may redeem my text in our eyes." In 1930 Cahun and Moore published a second book of verses and illustrations called ''Aveux non avenus'' (translated as "disavowed confessions"). Moore's illustrations for this work consist of collaged images assembled from her many photographs of Cahun, dealing with many of the same themes of identity that are can be read in Cahun's own photography and poetry.

In 1937 Moore and Cahun moved from Paris to Jersey, possibly to escape the increasing anti-Semitism and political upheavals leading up to World War II. They remained on the island of Jersey when German troops invaded in 1940. For several years, the two women risked their lives by distributing anti-Nazi propaganda to the German soldiers.[9] Despite having reverted to their original names and introducing themselves as sisters in Jersey, their resistance activities were discovered in 1944, and the women were sentenced to death and imprisoned. They were saved by the Liberation of Jersey in 1945, but their home and property had been confiscated and much of their art destroyed by the Germans.

Claude Cahun's health suffered during her wartime imprisonment; she died in 1954, after which Moore relocated to a smaller home. Moore committed suicide in 1972. She was buried with her partner Claude Cahun in St Brelade's Church.