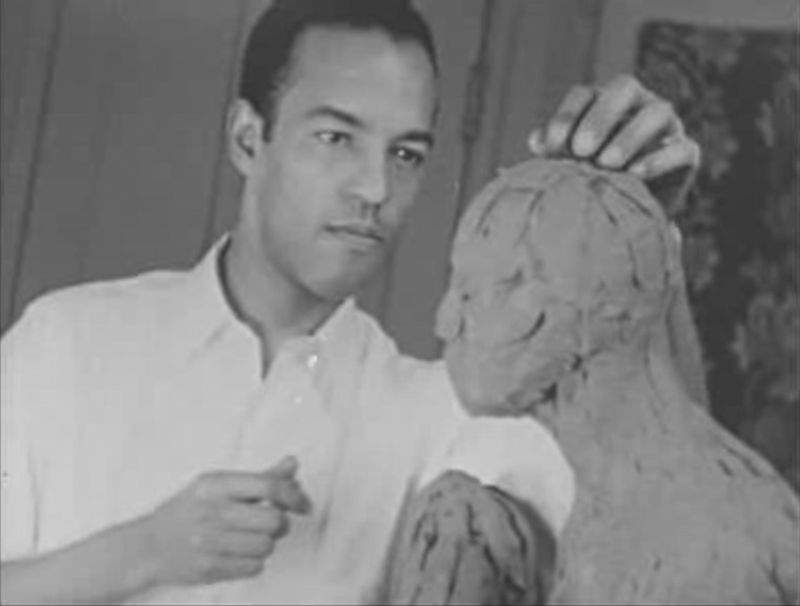 James Richmond Barthé, also known as Richmond Barthé (January 28, 1901 – March 5, 1989) was an African-American sculptor associated with the Harlem Renaissance. Barthé is best known for his portrayal of black subjects. The focus of his artistic work was portraying the diversity and spirituality of man. Barthé once said: "All my life I have been interested in trying to capture the spiritual quality I see and feel in people, and I feel that the human figure as God made it, is the best means of expressing this spirit in man."[2]

James Richmond Barthé was born in Bay St. Louis, Mississippi. His father's name is Richmond Barthé and mother's name is Marie Clementine Robateau. Barthé's father died at age 22, when he was only a few months old, leaving his mother to raise him alone. She worked as a dressmaker and before Barthé began elementary school she remarried to William Franklin, with whom she eventually had five additional children.[3] Barthé showed a passion and skill for drawing from an early age. His mother was, in many ways, instrumental in his decision to pursue art as a vocation. Barthé once said: "When I was crawling on the floor, my mother gave me paper and pencil to play with. It kept me quiet while she did her errands. At six years old I started painting. A lady my mother sewed for gave me a set of watercolors. By that time, I could draw very well."[4] Barthé continued making drawings throughout his childhood and adolescence, under the encouragement of his teachers. His fourth grade teacher, Inez Labat, from the Bay St. Louis Public School, influenced his aesthetic development by encouraging his artistic growth. When he was only twelve years old, Barthé exhibited his work at the Bay St. Louis Country Fair.[5] However, young Barthé was beset with health problems, and after an attack of typhoid fever at age 14, he withdrew from school.[6] Following this, he worked as a houseboy and handyman, but still spent his free time drawing. A wealthy family, the Ponds, who spent summers at Bay St. Louis, invited Barthé to work for them as a houseboy in New Orleans, Louisiana. Through his employment with the Ponds, Barthé broadened his cultural horizons and knowledge of art, and was introduced to Lyle Saxon, a local writer for the Times Picayune. Saxon was fighting against the racist system of school segregation, and tried unsuccessfully to get Barthé registered in an art school in New Orleans.[7] In 1924, Barthé donated his first oil painting to a local Catholic church to be auctioned at a fundraiser. Impressed by his talent, Reverend Harry F. Kane encouraged Barthé to pursue his artistic career and raised money for him to undertake studies in fine art. At age 23, with less than a high school education and no formal training in art, Barthé applied to the Pennsylvania Academy of Fine Arts and the Art Institute of Chicago, and was accepted by the latter.[8]

RICHMOND BARTHÉ (1909 - 1989) Untitled (Man Playing a Mandolin). Woodcut on cream wove paper, 1936. 135x89 mm; 5 3/8x3 1/2 inches, full margins. Signed in black ink, lower margin. A very good, dark impression. 1936. Similar in manner to the woodcuts of Rockwell Kent, this small print is from a very scarce group of greeting cards the sculptor Richmond Barthé made in the 1930s. Another example depicting his bronze, Blackberry Woman, the first piece by an African-American artist acquired by the Whitney Museum of American Art, is in the Ferdinand Rousseve Papers, Amistad Research Center, New Orleans.

During the next four years Barthé followed a curriculum structured for majors in painting. During this time he boarded with his aunt Rose and made a living working different jobs.[9] His work caught the attention of Dr. Charles Maceo Thompson, a patron of the arts and supporter of many talented young black artists. Barthé was a flattering portrait painter, and Dr. Thompson helped him to secure many lucrative commissions from the city's affluent black citizens.[8] At the Art Institute of Chicago, Barthé's formal artistic instruction in sculpture took place in anatomy class with professor of anatomy and German artist Charles Schroeder. Students practiced modeling in clay to gain a better understanding of the three-dimensional form. This experience proved to be, according to Barthé, a turning point in his career, shifting his attention away from painting and toward sculpture.[10] Barthé had his debut as a professional sculptor at The Negro in Art Week exhibition in 1927 while still a student of painting at the Art Institute of Chicago. He also exhibited in the April 1928 annual exhibition of the Chicago Art League. The critical acclaim allowed Barthé to enjoy numerous important commissions such as the busts of Henry O. Tanner (1928) and Toussaint L’Ouverture (1928). Although he was still in his late 20s, within a short time he won recognition, primarily through his sculptures, for making significant contributions to modern African American art. By 1929, the essentials of his artistic education complete, Barthé decided to leave Chicago and head for New York City.[11]

While many young artists found it very difficult to earn a living from their art during the Great Depression, the 1930s were Richmond Barthé's most prolific years.[12] The shift from the Art Institute of Chicago to New York City, where he moved following graduation, exposed Barthé to new experiences as he arrived in the city during the peak of the Harlem Renaissance. He established his studio in Harlem in 1930 after winning the Julius Rosenwald Fund fellowship at his first solo exhibition at the Women's City Club in Chicago. However, in 1931, he moved his studio in Harlem to Greenwich Village. Barthé once said: "I live downtown because it is much more convenient for my contacts from whom it is possible for me to make a living." He understood the importance of public relations and keeping abreast of collectors' interests.[3] Barthé mingled with the bohemian circles of downtown Manhattan. Initially unable to afford live models, he sought and found inspiration from on-stage performers. Living downtown provided him the opportunity to socialize not only among collectors but also among artists, dance performers, and actors. His remarkable visual memory permitted him to work without models, producing numerous representations of the human body in movement. During this time, he completed works such as Black Narcissus (1929), The Blackberry Woman (1930), Drum Major (1928), The Breakaway (1929), busts of Alain Locke (1928), bust of A’leila Walker (1928), The Deviled Crab-Man (1929), Rose McClendon (1932), Féral Benga (1935), and Sir John Gielgud as Hamlet (1935).[11] In October 1933, a major body of Barthé's work inaugurated the Caz Delbo Galleries at the Rockefeller Center in New York City. The same year, his works were exhibited at the Chicago World's Fair in 1933. In summer 1934, Barthé went on a tour to Paris with Reverend Edward F. Murphy, a friend of Reverend Kane from New Orleans, who exchanged his first class ticket for two third-class tickets to share with Barthé. This trip exposed Barthé to classical art, but also to performers such as Féral Benga and African American entertainer Josephine Baker, of whom he made portraits in 1935 and 1951, respectively.[13] During the next two decades, he built his reputation as a sculptor. He was awarded several awards and has experienced success after success and was considered by writers and critics as one of the leading "moderns" of his time. Among his African-American friends were Wallace Thurman, Claude McKay, Langston Hughes, Jimmie Daniels, Countee Cullen, and Harold Jackman. Ralph Ellison was his first student. Supporters who were white included Carl Van Vechten, Noel Sullivan, Charles Cullen, Lincoln Kirstein, Paul Cadmus, Edgar Kaufmann Jr., and Jared French. In 1945, Barthé became a member of the National Sculpture Society.[14]

Once, when interviewed, Barthé indicated that he was homosexual. Throughout his life, he had occasional romantic relationships that were short-lived.[37] In an undated letter to Alain Locke, he indicated that he desired a long-term relationship with a "Negro friend and a lover". The book Barthé: A Life in Sculpture by Margaret Rose Vandryes links Barthé to writer Lyle Saxon, to African American art critic Alain Locke, young sculptor John Rhoden, and the photographer Carl Van Vechten. According to a letter from Alain Locke to Richard Bruce Nugent, Barthé had a romantic relationship with Nugent, a cast member from the production of Porgy & Bess.[38]

Eventually, the tense environment and violence of the city began to take its toll, and he decided to abandon his life of fame and move to Jamaica in the West Indies in 1947. His career flourished in Jamaica, and he remained there until the mid-1960s when ever-growing violence forced him to move again. For the next five years, he lived in Switzerland, Spain, and Italy, then settled in Pasadena, California in a rental apartment. In this apartment, Barthé worked on his memoirs, and most importantly, editioned many of his works with the financial assistance of actor James Garner until his death in 1989. Garner copyrighted Barthé's artwork, hired a biographer to organize and document his work, and established the Richmond Barthe Trust.[15]