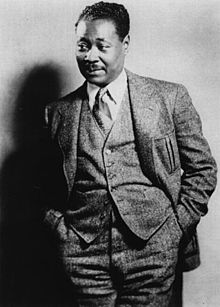 Festus Claudius "Claude" McKay (September 15, 1889[1] – May 22, 1948) was a Jamaican writer and poet, who was a seminal figure in the Harlem Renaissance. McKay did not hide his sexual desires for both men and women, but little is known about his relationships. Some scholars speculate that during his tenure on The Liberator, a leftist magazine based in Greennich Village, he may have had affairs with Waldo Frank and Edwin Arlington Robinson. Other scholars claim that while living in Paris in 1929 McKay had a sexual relationship with the Canadian writer John Glassco. A number of Harlem Renaissance writers, including Wallace Thurman, Claude McKay, Countee Cullen, and possibly Langston Hughes, had relationships with men, and the writing of this genre often included references to homosexual life. McKay’s 1928 Home to Harlem included a scene where “the dark dandies were loving up their pansies”; Thurman’s The Blacker the Berry (1929) and The Infants of the Spring (1932) also referenced this world.

McKay’s poetry speaks to an imagined or experienced queer romantic homosocial/homosexual intimacy with Bennie, a police officer colleague. This intense queer relationship between Bennie and McKay (or McKay’s fictional narrator) is told within three poems published in 1912: two in Constab Ballads and one in Songs of Jamaica. In Songs of Jamaica, the poem ‘To Bennie (In Answer to a Letter)’ promises his love ‘burns as of old’ and nothing can sever their friendship. In Constab Ballads, ‘Bennie’s Departure’, described by William J. Maxwell as ‘McKay’s most pointedly homoerotic poem’, tells the story of their meeting, working together, the narrator’s love for Bennie and his pain at Bennie leaving the police depot. This poem was then followed with ‘Consolation’ where he again reflected on the pain of Bennie’s leaving.

McKay wrote four novels: Home to Harlem (1928), a best-seller that won the Harmon Gold Award for Literature (two scenes in this novel are set in black lesbian bars), Banjo (1929), Banana Bottom (1933), and in 1941 a manuscript called Amiable With Big Teeth: A Novel of the Love Affair Between the Communists and the Poor Black Sheep of Harlem which remained unpublished until 2017.[2] McKay also authored collections of poetry, a collection of short stories, Gingertown (1932), two autobiographical books, A Long Way from Home (1937) and My Green Hills of Jamaica (published posthumously), and a non-fiction, socio-historical treatise entitled Harlem: Negro Metropolis (1940). His 1922 poetry collection, Harlem Shadows, was among the first books published during the Harlem Renaissance. His Selected Poems was published posthumously, in 1953.

McKay was attracted to communism in his early life, but he always asserted that he never became an official member of the Communist Party USA. However, some scholars dispute the claim that he was not a communist at that time, noting his close ties to active members, his attendance at communist-led events, and his months-long stay in the Soviet Union in 1922–23, which he wrote about very favorably.[3] He gradually became disillusioned with communism, however, and by the mid-1930s had begun to write negatively about it.[4]

It is widely assumed that McKay was bisexual, as he pursued relationships with both men and women throughout his life. He particularly enjoyed the simultaneous secrecy of New York City; he never officially “came out” nor explicitly stated his sexual preference, but he was able to enter the “clandestine” homosexual communities of New York and find acceptance within them. Despite never having confirmed his sexuality, homosexual sentiments are clear in several of his poems. In others, the gender of the speaker is not identified, which leaves to interpretation the nature of the relationships presented in said works.[28]