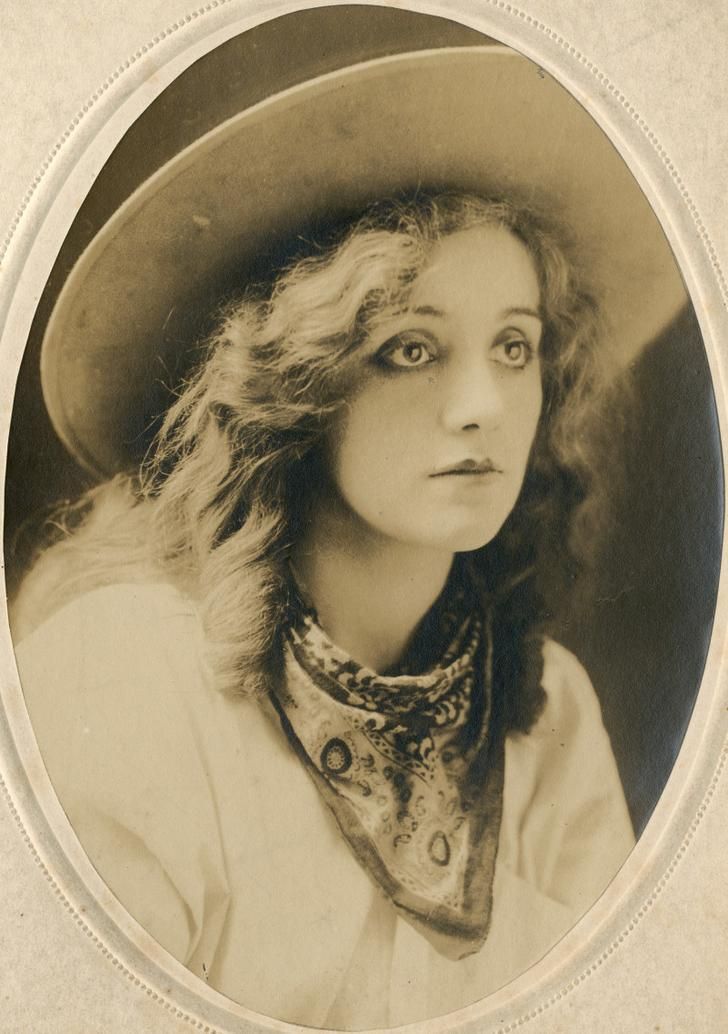 Laurette Taylor (born Loretta Helen Cooney; April 1, 1883[1] – December 7, 1946)[2][3] was an American stage and silent film star who is particularly well-known for originating the role of Amanda Wingfield in the first production of Tennessee Williams's play The Glass Menagerie. Lynn Fontanne move to the United States in 1916 as a member of the company run by Laurette Taylor and Hartley Manners. It has been suggested that Fontanne was intimate with Taylor.

On December 22, 1912, she married British-born playwright J. Hartley Manners, who wrote the play Peg o' My Heart, a successful play and an enduring personal triumph for Taylor, who toured in it extensively throughout the country. The play's success inspired a 1922 film version starring Taylor and directed by King Vidor. A six-reel print of the film survives in the Motion Picture Division of the Library of Congress. The marriage was successful and Taylor remained married to Manners until his death in 1928. By law, Taylor lost her U.S. citizenship by marrying a foreign national. A widow, Taylor reclaimed by naturalization, on September 11, 1930, her United States citizenship (cert #3234876). Her petition notes her "not having acquired any other nationality by affirmative act".[3]

Taylor made her Broadway debut in The Great John Ganton in 1908 and appeared in other stage productions such as The Ringmaster, Alias Jimmy Valentine, Seven Sisters, Lola Lola, and The Bird of Paradise. Taylor also appeared in other productions, including One Night in Rome, The Wooing of Eve and the special production, Laurette Taylor in Scenes From Shakespeare. In the last production, she performed scenes from Romeo and Juliet, The Merchant of Venice, and The Taming of the Shrew.[5][6]

According to New York Times theatre critic Brooks Atkinson, it was The Girl in Waiting (1910), which "made her a star."[7]

The effect was so seemingly spontaneous that, early in her career, some doubted she was deliberately acting, as "she employed none of the ritualistic mannerisms or extravagances of the conventional acting of her day."[7]

Her biggest hit was Peg o' My Heart. A simple Cinderella-formula vehicle written for her by her husband Manners, it ran on Broadway from December 20, 1912, to May 1914, setting a new Broadway dramatic-play run record of 607 performances. The play earned her and her husband about US$10,000 a week, made Taylor "the most generally worshiped [theatrical] star of her time", and cemented her reputation as a skilled actress. After it closed on Broadway, Taylor starred in the London production until German Zeppelin bombing closed it down in 1915.[7]

In 1917, she appeared in Out There, (another vehicle written for her by Manners) playing "an obscure Cockney waif" who, "by patriotism and idealism" manages to become a uniformed Red Cross nurse. "She relieved the suffering of wounded English soldiers by attending to them professionally and by charming them in person." A line from the play – "If I go, will you go?" – became the headline of a highly effective armed forces recruiting poster.[7]

In 1918, Taylor starred in yet another successful Manners vehicle, Happiness (she would later reprise the role in the 1924 movie of the same name). According to Atkinson, the play version was "a sentimental comedy about a Brooklyn errand girl who taught a rich customer the secret of happiness."[7]

Soon after, Taylor toured the nation with a revival of Peg o' My Heart, which reopened on Broadway at the Cort Theater on February 14, 1921, and ran for another 692 performances.

However, by the 1920s, public taste had become more sophisticated. Taylor had always starred in the kind of simple, formulaic plays which had delighted pre-World War I middle-class audiences, and her popularity waned. New York Times theatre critic John Corbin wrote that she "had probably the greatest talent, the highest spirit of our times", but that her dated material held her back.[7]

Attempting to change her course, Manners then wrote a serious play for her, The National Anthem, a play with "high motives" which "rebuked and renounced the jazz generation." It opened in 1922 and, unsurprisingly, failed. It was the last time Taylor appeared in a play by her husband.[7]

In 1924, Taylor starred in a film version of Happiness, directed by King Vidor, which told of the adventures of a young shopgirl, "Jenny Wray", who learns that riches do not necessarily lead to happiness. The cast included Hedda Hopper and Pat O'Malley. The same year, Taylor starred in another screen version of Manners' dramatic play, One Night In Rome, in which she played the dual roles of Duchess Mareno/Madame Enigme. Taylor seems to have enjoyed making One Night in Rome as she kept a personal print of the movie to always show guests at her home, running it over and over again. Taylor's friend Noël Coward spent a weekend at her home. He was inspired by that visit to write, in just three days, his comedy of manners Hay Fever (1925).

The play, a comedic dissection of a family whose theatrical excesses drive their unsuspecting visitors to distraction, was a major hit from the moment of its August 6, 1925 debut. It also caused a serious and permanent rift in the friendship of Taylor and Coward. She suffered from severe alcoholism for many years, a condition which sharply limited her appearances from the late 1920s throughout her career. In 1938, she headed the cast in a revival of Outward Bound and did not appear again until her re-emergence in Williams' The Glass Menagerie in 1944; her performance received nearly unanimously rapturous reviews and won her the New York Drama Critics Award for Best Actress of the season.

Taylor planned to make her film debut in Peg o' My Heart, but the film version of the hit play was coveted by nearly every screen actress, including Mary Pickford, who made an offer considerably in excess of the highest amount ever paid for the picture rights to a play or a story. The rights to the film were coveted because of the production's established popularity. Almost any actress in the famous role would be assured of a resounding success, however Taylor doggedly clung to the movie rights for her own use, should she ever commit to appearing in a film. It took years for the play to be filmed and released.

The play was considerably expanded for the film version, and the final production was an immediate success with audiences. Taylor went on to make another adaptation of one of her stage successes, Happiness, and then a third and final film for MGM, One Night in Rome.

She never appeared in another film, although David O. Selznick did invite her to film a sound test for a role in his 1938 film The Young in Heart, which Taylor did, but she declined the part and actress Minnie Dupree was cast. (The sound film test exists and has been shown on TV from time to time). In preparing interviews for what became Broadway: The Golden Age, Rick McKay kept asking each person "Who influenced you the most" and time and time again, Laurette Taylor's name was mentioned. McKay ended up devoting an entire section to Taylor, and it includes a section on her 1938 screen test.

Taylor wrote an essay on acting, titled "The Quality Most Needed", which was included in some of the early editions of the text Actors on Acting. In it, Taylor muses on the importance of imagination over physical beauty for the actress wishing to truly create art. She sharply criticizes performances where you can "see the acting", and warns against paying too much attention to the traditions of acting, saying it "cramps creative instinct". To Taylor, the imaginative actress will leave you with a feeling that you can imagine her character's conduct "[i]n any position, aside from the situations involved in the actions of the play". Taylor applauded the imaginative actress who "builds a picture, using all her heart and soul and brain", not for the audience but for herself.[8]

Taylor died from a coronary thrombosis on December 7, 1946, at age 63. Her ashes were interred at Woodlawn Cemetery in the Bronx, New York City.

Writing after Taylor's death, Tennessee Williams paid tribute to "the great warmth of her heart", saying, "There was a radiance about her art which I can compare only to the greatest lines of poetry, and which gave me the same shock of revelation as if the air about us had been momentarily broken through by light from some clear space beyond us."[9]

In 1960, the play Laurette, starring Judy Holliday and directed by José Quintero, closed out of town in Philadelphia due to Holliday's battle with breast cancer.[10] For years, film director George Cukor tried unsuccessfully to launch a film version of Taylor's life. In 1963, a musical adaptation of Laurette opened on Broadway. The musical, titled Jennie,[11] starred Mary Martin in the title role. Its book, by Arnold Schulman, is credited as having been suggested by Marguerite Courtney's Laurette, and its score was by Howard Dietz and Arthur Schwartz. It ran for only 82 performances, receiving mediocre reviews. A one-act play, Opening Night, appeared briefly off-Broadway in October 1963. Peggy Wood portrayed Fanny Ellis, a once-famous star who is preparing for a performance in her dressing room. Many thought Fanny was actually Taylor. Wood appeared with Ruth Gates. The play ran for only 47 performances.

According to her daughter, Marguerite Courtney, Laurette destroyed all press books, letters, programs, photograph albums, and other memorabilia associated with her life with J. Hartley Manners upon his death in 1928. In 1995 and 2009, the family placed the remainder of her papers at the Harry Ransom Center. The archive includes correspondence, personal and theater photographs, photograph albums, sound recordings, press reviews, articles, and legal documents, as well as writings by others. Elsewhere in the Ransom Center's holdings is Taylor's screen test for David O. Selznick and extensive collections relating to Tennessee Williams.[12]