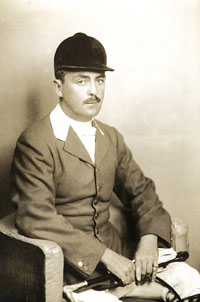 Harvey enjoyed a forty-year friendship with Edward VII, the Duke of Windsor. Harvey played piano with Cole Porter, conversed in fluent French with writer Colette and partied with Elsa Maxwell. Add to the list of friends Terence Rattigan, Moss Hart, Clifton Webb, designer Anthony Hail and the renowned photographer Horst. Although Ladew was always discreet, he gravitated to friends who were male celebrity sexual rogues and "the women who loved them."

In "Perfectly Delightful" (1999), a biography of Ladew by Christopher Weeks, the sexual orientation of Harvey Ladew is swept under the rug, yet it is always the elephant in the room throughout the book's nearly 300 pages. Not once is a personal relationship of any type mentioned, but there are hints. On page 58 Weeks relates that Harvey spent a “wonderful holiday in Venice with his longtime companion, the Belgian count François de Buisseret. A clutch of romantic-looking photographs exist as testament to that stay...” The mid-1920s photograph on page 59 shows Ladew and de Buisseret sitting knee-to-knee in St. Mark's Square in a romantic pose indeed. Another hint appears on page 210: When the celebrated lesbian hostess Elsa Maxwell and her female partner Dorothy “Dickie” Fellowes-Gordon invited Harvey to accompany them on their long drive from the south of France to Venice, he invited a companion of his own, The Honorable John Young, who enjoyed a career in the diplomatic service. According to Weeks, “Perhaps it was the new friendship that made [Harvey] rave about the trip through Italy.”

On page 87 Weeks describes the close friendship between T.E. Lawrence and Ladew. Although the author mentions Lawrence's homosexuality, he is mute on Ladew. Weeks writes of their similar and highly eclectic tastes and interests, culminating with, "Finally, neither man married. Nor...did either man apparently ever give the slightest indication of wanting to marry." Weeks relates that a NYC gossip columnist wrote in the 1920s, "the tall, good looking (Ladew) was the despair of the ladies, withstanding their melting glances without a quiver."

Harvey gave decorating tips to Baltimore native Billy Baldwin, his lifetime friend. The celebrity interior designer later credited Ladew as the principal influence on his own unique perspective in interior decór. When the club house of the Elkridge-Harford Hunt was destroyed by fire in 1938, Harvey oversaw the redesign, rebuilding and redecoration. As Billy Baldwin wrote, “one of Harvey’s eccentricities was that he was not interested in society, per se. He was interested in all kinds of fascinating people.”

Ladew was born in Manhattan, New York City on April 6, 1887 to Edward R. Ladew. He had a sister Elise Wall Ladew (1890–1978) who married William Russell Grace III.[2] Among their homes were a lavish townhouse at 3 East 67th Street in Manhattan and Elsinore, a storied summer home in Glen Cove, the epicenter of Long Island’s so-called Gold Coast. Both the townhouse and Elsinore have been since demolished. The Elsinore estate boasted a full half mile of shore line. This area was the refuge of choice for turn of the century financiers, blue bloods of New York society and even some run-of-the-mill multimillionaires. Harvey’s father had enlarged the shore-front estate’s turreted Victorian mansion and added extensive greenhouses, gardens, kennels and stables. Harvey’s mother, an accomplished horse- and yachtswoman, oversaw the cultivation of rare orchids, roses and exotic plants inside the property’s dozen greenhouses.

As a child Ladew spoke French before he spoke English and was treated to boyhood drawing lessons from curators at the Metropolitan Museum of Art.[3] The Ladew family traveled extensively, often visiting relatives in Europe. Ladew was in Europe at the outbreak of World War I and subsequently served during the war as an Army liaison officer for the American forces.

After the war's conclusion, Ladew returned home and withdrew from active management of the family business, instead indulging in pursuit of his own interests. One of these passions was fox hunting. An ardent fox hunter since 1914, Ladew spent much time early in his life riding horses on Long Island. Ladew participated in fox hunting not only in the United States, but also in England, Ireland, and France. He once set an international fox hunting record by riding to hounds on both sides of the Atlantic in a seventy-two-hour period. This was accomplished by crossing the Atlantic in an amphibious plane.

In 1929 Ladew's passion for fox hunting led him to visit the part of Maryland north of Baltimore. Leaving his home on Long Island, he purchased the 250-acre (101 ha) "Pleasant Valley Farm" located in Monkton.[4] At the time of purchase, the house on the property was in a dilapidated condition. Ladew embarked on an extensive restoration project, rebuilding sections of the house and including modern fixtures. As reconstructed, it would eventually have 15 rooms, including an oval library called "one of the 100 most beautiful rooms in America".[4]

In 1937 the house was mostly completed, and Ladew turned his attention to the grounds. He had discovered the art of topiary in England in the 1920s when he saw a clipped hunt scene atop a hedge in Gloucestershire. From his trips to England and Italy he knew what sort of garden he wanted. It was to have two cross axes to allow for the long vistas he had seen in Italian gardens with "garden rooms" off each axis. The axes meet in Ladew's oval swimming pool, placed in the center of the Great Bowl. He designed topiaries depicting a fox and hounds, a Chinese junk with sails, swans, and a giraffe, among others.[4]

This transformation of 22 acres (89,000 m²) of fields previously used for crops and livestock into gardens led to Pleasant Valley Farm being described as "the most outstanding topiary garden in America," by the Garden Club of America.[3] It was later proclaimed an "exquisite garden estate" by The New York Times.[4]

In 1968 the home's oval library was rated as one of the 100 Most Beautiful Rooms in America, but Ladew used it as an escape valve. He had a special lever installed that would allow one of the bookcases to swing open to allow immediate access to the gardens when he was informed of the arrival of an unwanted guest. Of special note is that he constructed the room in an oval shape to mirror the lines of the large partner's desk he had purchased. When it was discovered that the desk would not fit into any other room in the house, he added a new room to the north end of the house to mirror its oval configuration. With his typical wit, he called it his "circulating library."

Ladew was determined to preserve his garden for all, and so established the Ladew Topiary Gardens, Inc., a non-profit organization whose mission is "to maintain and promote the gardens, house and facilities in keeping with the creative spirit of Harvey S. Ladew for the public benefit and for educational, scientific, and cultural pursuits." The house, gardens, and grounds were opened to the public in 1971, hosting several events a year.[3]

During the late 1930s Ladew bought the John S. Phipps beachfront estate in Gulfstream FL, an exclusive polo sporting enclave adjacent to Delray Beach, south of Palm Beach. Gulfstream had been developed by the Phipps brothers, and Ladew was right at home among the polo set. He rechristened his property Pied-à-Mer, and his striped cabana-on-wheels became a local beach landmark for more than 30 years. Unlike many storied Palm Beach area great houses, the Ladew-Phipps oceanfront home was not demolished for redevelopment or repurposed as a clubhouse for a gated golf community. It lives on today in full glory as a private home, although the open air theater-playhouse with tropical murals from the Ladew-Phipps era has since been converted into a guest house.

The April 1938 issue of Vogue magazine featured Pied-à-Mer’s “House of Cards,” an annex on the estate used solely for entertaining. As indicated by its moniker, the structure was decorated in a playing card theme, down to the floor tiles in the lavatories. Ladew was a master bridge player, and his estate in Maryland boasted a card-playing pavilion, as well. In 1944 Harvey painted a nude portrait of society decorator Billy Baldwin's naked backside lying in repose on a beach chair on the grounds of Pied-à-Mer. Today that small painting resides at Pleasant Valley Farm in Maryland.

Ladew was a recipient of several awards throughout his lifetime. He was the Master of the Elkridge-Harford Hunt for several years and he received the Distinguished Service Medal of the Garden Club of America for his "great interest in developing and maintaining the most outstanding topiary in America, without professional help."