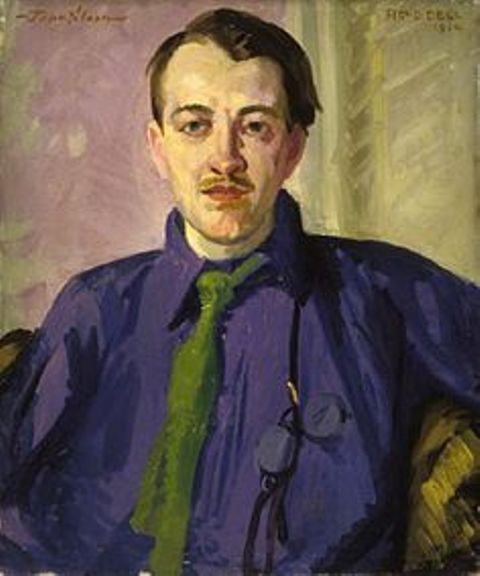 Floyd James Dell (June 28, 1887 – July 23, 1969) was an American newspaper and magazine editor, literary critic, novelist, playwright, and poet. Dell has been called "one of the most flamboyant, versatile and influential American Men of Letters of the first third of the 20th Century."[1] In Chicago, he was editor of the nationally syndicated Friday Literary Review.. As editor and critic, Dell's influence is seen in the work of many major American writers from the first half of the 20th century. A lifelong poet, he was also a best-selling author, as well as a playwright whose hit Broadway comedy, Little Accident (1928),[2] was made into a Hollywood movie.[3]

DDell wrote extensively on controversial social issues of the early 20th century, and played a major part in the political and social movements originating in New York City's Greenwich Village during the 1910s & 1920s. As editor of left-wing magazine The Masses, Dell was twice put on trial for publishing subversive literature.

Dell was born in Barry, Illinois, on June 28, 1887 to Anthony Dell, a Civil War veteran and unsuccessful butcher, and Kate Crone, a home maker. Dell spent his childhood in poverty, with his family moving often. He lived in Quincy, Illinois, for a large portion of his childhood. Encouraged by his mother, a former school teacher, Dell became a voracious reader, spending much of his time at Quincy's local library.

In 1903 Dell moved with his family to Davenport, Iowa, which was then a liberal and cosmopolitan port city and center of trade with a thriving literary and intellectual scene. Initially attending Davenport High School, Dell did not return to school after the summer of 1904, instead becoming a reporter at a local paper. Dell also became an active socialist and associated with other local writers to form what would be called the 'Davenport group'. While in Davenport, Dell also began publishing poetry, first in local papers, then in national periodicals. By the time Dell left Davenport for Chicago in 1908, he had escaped blue-collar life to emerge as a promising young professional writer and intellectual. It was also in Davenport that Dell met Marilla Waite Freeman, the director of the library. Dell is quoted as saying that he "caught a glimpse of mountaintops" through Freeman's inspiration, and he dedicated a number of poems and novels to her. Freeman also served as the model for the librarian character, Helen Raymond, in Moon-Calf.[4]

In Chicago Dell became editor and book reviewer for of the Chicago Evening Post's nationally distributed Friday Literary Review,, the "leading organ of literary modernism in America at the time."[5] Dell used his position as editor to introduce many Americans to modernist literature and promote the work of many Chicago writers, including Theodore Dreiser, Sherwood Anderson, and Carl Sandburg. Dell's further influence as a critic can be seen in the work of many major American writers from the first half of the 20th century.

Relocating to New York City in 1913, Dell became a leader of the pre-war bohemian community in Greenwich Village and managing editor of Max Eastman's radical magazine The Masses.

Siblings Max and Crystal Eastman lived together for several years on 11th Street in Greenwich Village among other radical activists.[4] The group, including Ida Rauh, Inez Milholland, Floyd Dell, and Doris Stevens, also spent summers and weekends in Croton-on-Hudson.[5]

Following the passing of the Espionage Act of 1917, the government officially labeled the magazine "treasonable material" in August of that year and issued charges against its staff for "unlawfully and willfully… obstruct[ing] the recruiting and enlistment of the United States" military. The "conspirators" faced fines up to 10,000 dollars and twenty years imprisonment. After deliberating for three days, the jury was unable to come to a unanimous decision. The jurors seeking to convict the defendants blamed one juror for being unable to conform to the majority opinion, as he was also a socialist. Not only did the other eleven jurors demand the prosecutor to levy charges against the lone juror, but they attempted to drag the socialist supporter out into the street and lynch him. The Judge, given the uproar, declared a mistrial. A second trial also resulted in a deadlocked jury.

Counted among Edna St. Vincent Millay's close friends were the writers Witter Bynner, Arthur Davison Ficke, and Susan Glaspell, as well as Floyd Dell and the critic Edmund Wilson, both of whom proposed marriage to her and were refused.[12] Dell wrote that the red-haired and beautiful Millay was "a frivolous young woman, with a brand-new pair of dancing slippers and a mouth like a valentine."

Dell joined fellow Davenporters Susan Glaspell and George Cram Cook as a member of the Provincetown Players and his play King Arthur's Socks was the first performed by that historic theater group.

Following the war, Dell turned to fiction and his first novel, the bildungsroman (or coming-of-age) Moon-Calf, became a best seller.[6] It was an early book for the publisher Alfred A. Knopf and published at a time when many mid-western writers were writing about small-town life; Sinclair Lewis's book Main Street was published within days of Moon-Calf.[6] By 1920 Moon-Calf had sold 38,500 copies and went through eleven printings.[6]

This was followed by several other novels with limited success. His autobiographical memoir, Homecoming, is a striking eyewitness view of the social and artistic-bohemian history of the midwest. Dell continued to publish both fiction and non-fiction until the end of his life.

In 1919 he moved to Croton-on-Hudson, New York, with his second wife, Berta Marie Gage, but remained active in Village publications.

He encouraged her friend, Eunice Tietjens, to pursue writing professionally. He said that Henrietta Rodman "had an extraordinary gift for stirring things up. Incredibly naïve, preposterously reckless, believing wistfully in beauty and goodness, a Candide in petticoats and sandals."[19]

Dell joined the WPA and U.S. Information Service in 1935 from which he retired following World War II. He married Beatrice Marie, and had two sons. One son, Christopher Dell, became a writer as well. He married and had two daughters: Jerri Dell who is the current literary executor and archivist of the Dell Collection, and Kathryn Dell Kaufman; then he divorced and remarried Kate Kane. With Kate he had a daughter, Mia Dell, who is married and has three children.

In 2015, he was inducted into the Chicago Literary Hall of Fame.[7]