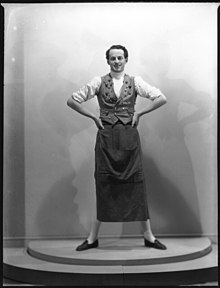 He was the second son of Reginald Herbert, 15th Earl of Pembroke.[1] He spent his first few years in Castletown, Ireland. At the age of four, he moved to the family home of Wilton, near Salisbury.[1] Attending Wixenford Preparatory School, he was later sent on to Eton. He had brief stints as both a film actor, appearing in 1930's Knowing Men, and as a cabaret performer. He briefly shared an apartment with Noël Coward in the East End, and was satirized by Lord Berners as the character Daisy Montgomery in his 1936 satiric novel, The Girls of Radcliff Hall.[2] He was also scathingly satirized as "Peter Barclay" in William Bayer's novel "Tangier."

He spent almost fifty years in Tangier, Morocco where he was known for his vibrant personality, frequent lavish parties,[1] good taste, and ruthless snobbery.[3] He had first visited Tangier in 1936, and in 1939 he had rented a flat there with Cecil Beaton. He was referred to by Ian Fleming as 'the Queen of Tangier'.[4] He lived at Villa Mektoub. He died of kidney failure in 1995 and was buried in the cemetery at Saint Andrews' Church. He had been a devout Anglican. On his tombstone was engraved, "He loved Morocco".

His books, with vitality and wit, recall his years in the company of such figures as Cecil Beaton, Lady Diana Cooper, Noël Coward, Paul Bowles and Jane Bowles, Cyril Connolly, Brian Howard, Barbara Hutton, Osbert Sitwell and Tallulah Bankhead. These include Second Son: An Autobiography (1972), which included a foreword by Paul Bowles and photographs by Cecil Beaton, Engaging Eccentrics: Recollections (1990), his second volume of autobiography, and Relations and Revelations: Advice to Jemima (1992), a book of memories and opinions written in the form of advice to his great-niece Jemima.