Carlos de Beistegui e Yturbe (31 January 1895 – 17 January 1970),[1] also known as Charlie de Beistegui, was an eccentric French-born Spanish multi-millionaire art collector and interior decorator who was one of the most flamboyant characters of mid-20th-century European life. His ball at the Palazzo Labia in Venice in 1951 is still described as "the party of the century". Beistegui was often referred to as "The Count of Monte Cristo". n 1939 he acquired the Château de Groussay, at Montfort-l'Amaury (Yvelines). With the collaboration of interior architect Emilio Terry and the constant advice of Charles de Noailles, Groussay was the center of elegance until 1970. Emilio Terry had his own bedroom at the castle. Beistegui met Emilio Terry in Biarritz in 1922 and they died within a month of each other in December 1869 and January 1970. [2]

He is not to be confused with his namesake uncle (1863–1953), whose collection of notable 18th- and 19th-century paintings was donated to the Louvre.[3]

Beistegui's origins are Spanish through his Mexican parents. He was born the heir to a huge Mexican fortune, to parents of Basque origin, and a mother (Dolores de Yturbe), both of whose ancestors had migrated from Spain to Mexico in the 18th century.[3] The family made its fortune there in silver, agriculture, and real estate but left Mexico after the execution of Emperor Maximilian in 1867.[4] Beistegui was, however, born in Paris to Mexican parents, and travelled under a Spanish diplomatic passport.[3] He was brought up in France, Spain and England, and only ever visited Mexico twice, briefly.[5] His family members held diplomatic posts representing Mexico in the U.K., France, Spain, and Russia. 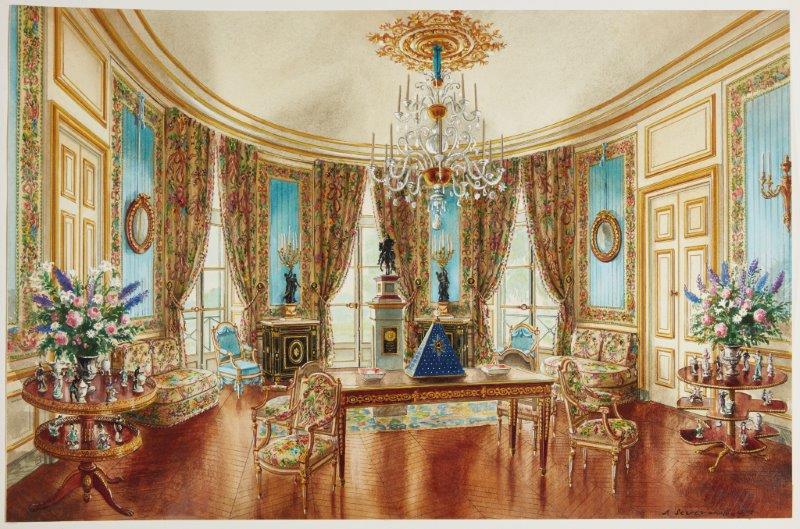 Alexandre Serebriakoff, 1944, The XVIII th century rotunda salon. The fabric woven by Prelle in 1941, is the same as the one which lines Marie Antoinette’s bedroom in Versailles 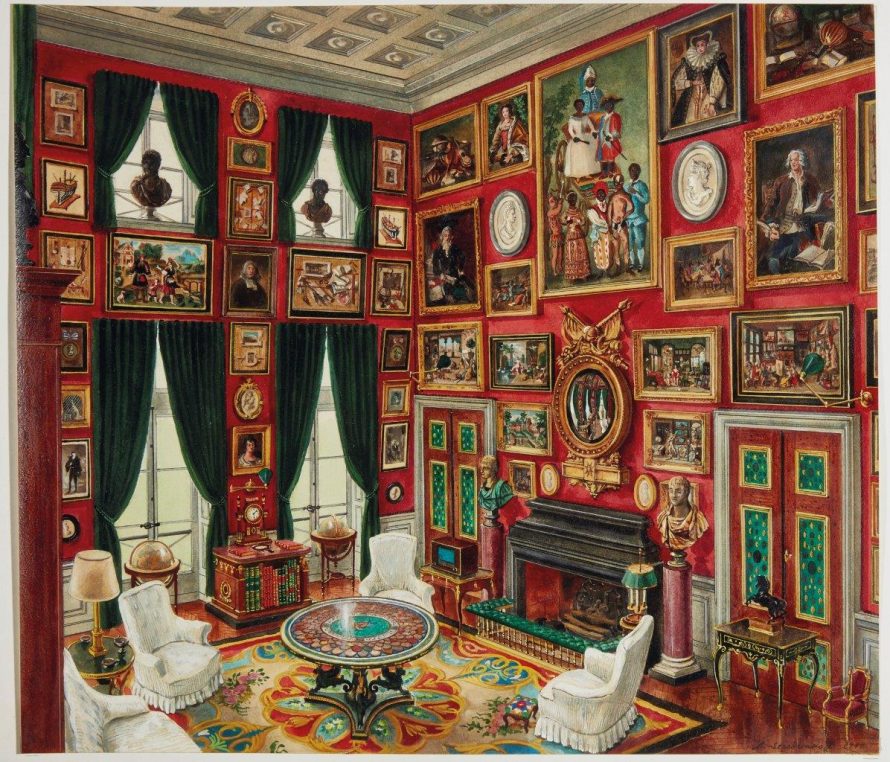 Alexandre Serebriakoff, 1942, The most astonishing room is the library separated in two, the books side and the “conversation” side with this extraordinary guéridon covered with 112 samples of precious Italian marbles 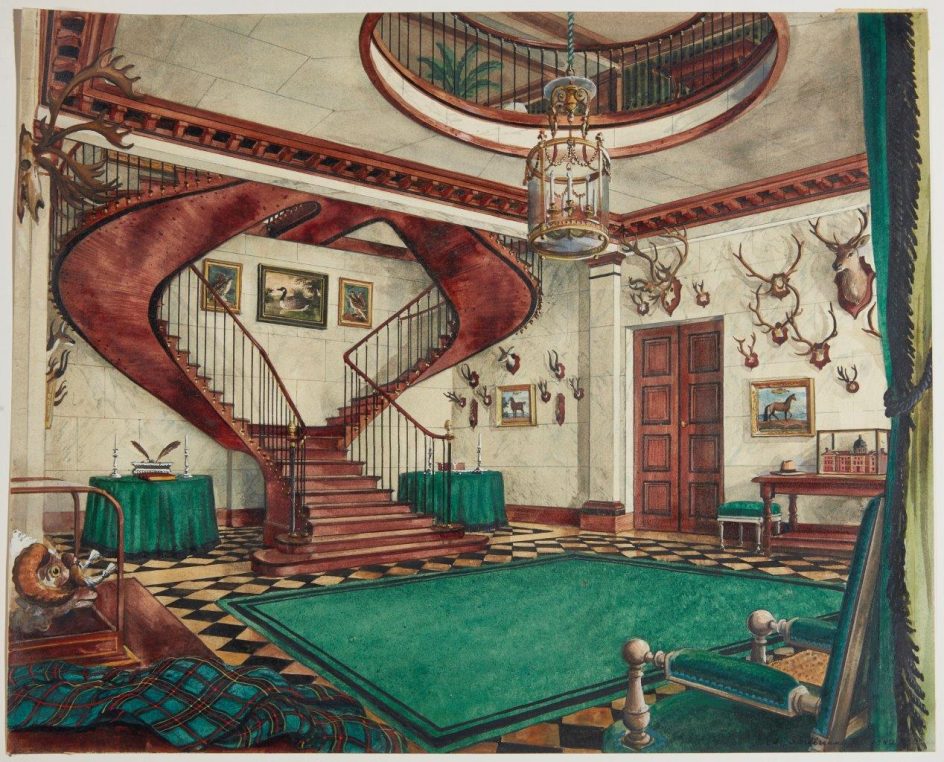 Alexandre Serbriakoff, The main Hall, 1942, with its double revolution staircase 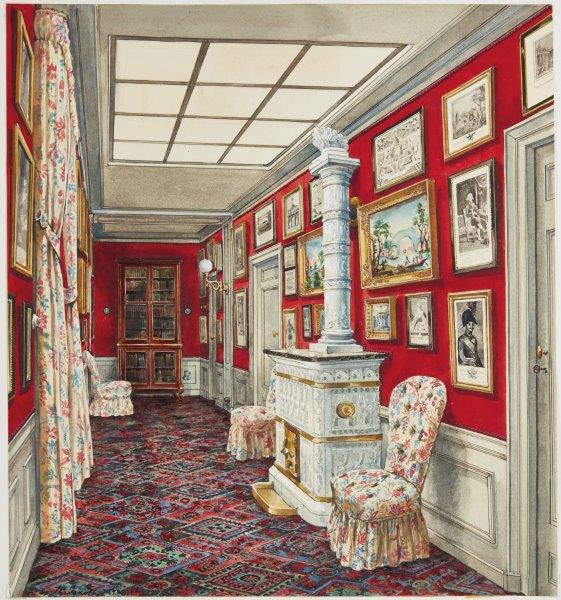 The first floor corridor shows a superb stove which heated the whole house. It was lit from above and the carpet with a blue and red Turkish design could be found in Beistegui’s apartment of rue de Constantine 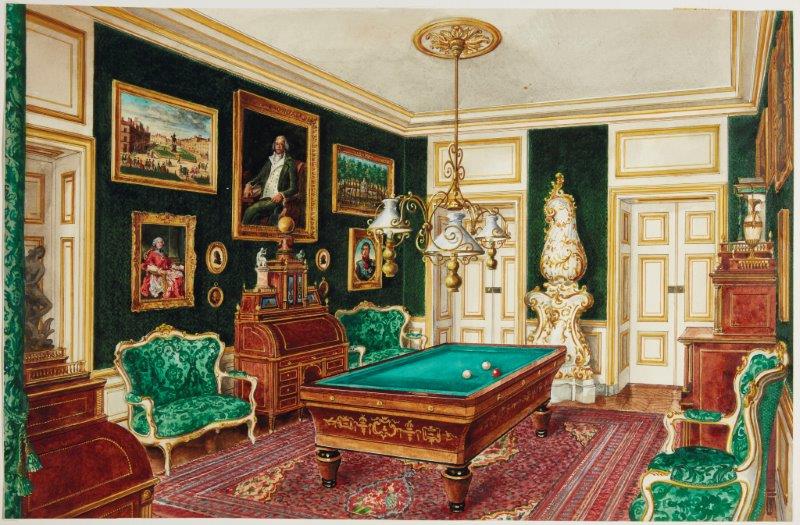 The pool room with the Louis Philippe billiard found in the castle when it was bought. The two desks are by followers of Roentgen (1785-1790) 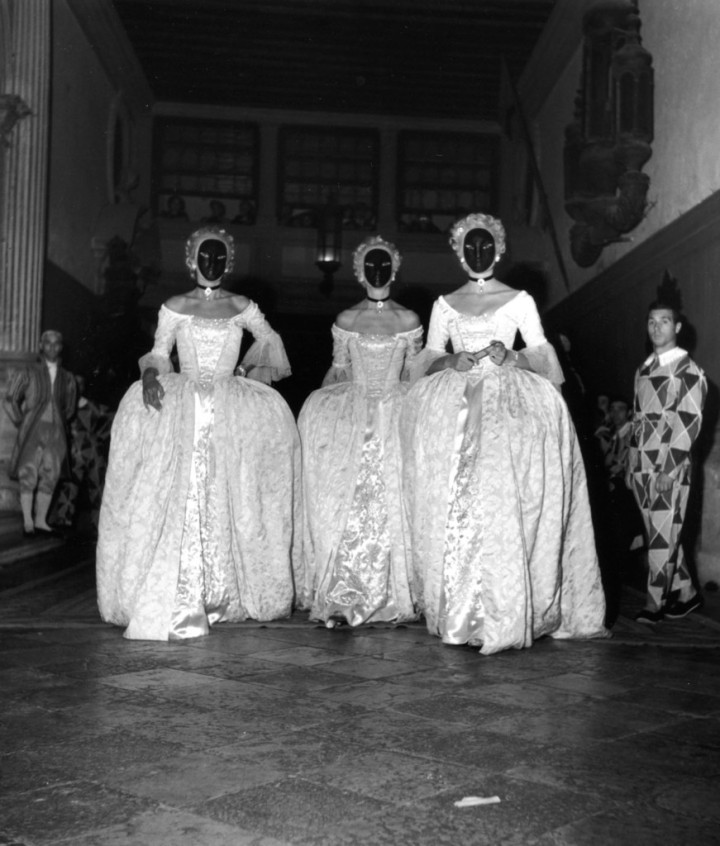 He was educated at Eton, where he wrote a volume of poetry he illustrated with his own drawings. Although he was expected to read History of art at Cambridge, the outbreak of World War I frustrated his application. He then joined his parents in their mansion on the esplanade of Les Invalides in Paris.[4]

In the early 1930s, he had a penthouse built on the Champs-Élysées, designed by Le Corbusier. It included an electronically operated hedge that parted to reveal a view of the Arc de Triomphe,[3] and a roof terrace designed by Salvador Dalí.[6]

In 1939 he acquired the Château de Groussay, at Montfort-l'Amaury (Yvelines), and spent the next 30 years improving its interiors and grounds and expanding the structure by adding extra wings. These included a 150-seat theatre, inspired by the Margravial Opera House in Bayreuth, one of the most beautiful extant theatres in Europe.[5] He hired Emilio Terry to undertake the interior design. He had huge copies of the world's great paintings installed, but often claimed they were the originals (for example he claimed that Hans Holbein's portrait of Henry VIII owned by the British Royal Family was a fake, and his was the original.)[5] He commissioned Spanish weavers to create tapestries in the style of Goya. He had giant Chinese jars which looked authentic but were actually made of tin or plaster. But he had an enormous number of genuine pieces, such as an ebony and bronze Louis XVI desk once owned by Paderewski. The furnishings were described as the greatest private interiors concocted in the 20th century. The house was admired by decorators such as David Nightingale Hicks and Mark Hampton, who called it the most beautiful house in the world.[3] One of the rooms so impressed Cecil Beaton that he used it as the model for Henry Higgins' library in My Fair Lady. The Château de Groussay was the scene of some of the grandest weekend parties of the 20th century.[5] The gardens have been classified by the French government as one of the Remarkable Gardens of France.

Beistegui was not troubled by the Germans during their occupation of France, because he had a Spanish diplomatic passport, and was treated as a citizen of a neutral country.

He did occasionally undertake commissions for others – salons in the Ministry of Foreign Affairs in Madrid, a suite of rooms at the Waldorf-Astoria Hotel in New York City, and the library at the British Embassy in Paris (with the designers Georges Geffroy and Emilio Terry) – but he used his artistic talents almost entirely for his own pleasure.[3] Cecil Beaton wrote in his diary: "Beistegui is utterly ruthless. Such qualities as sympathy, pity or even gratitude are sadly lacking. He has become the most self-engrossed and pleasure-seeking person I have met."[3]

In 1948, Beistegui acquired the Palazzo Labia, just off the Grand Canal in Venice, and began an intensive restoration. He purchased furnishings that had been acquired from the palazzo's less fortunate neighbours, including frescoes by Raphael, Annibale Carracci, and Guido Reni. These works of art, coupled with newly acquired tapestries and antiques, restored the palazzo to its former splendour. So avid a collector was Don Carlos that his taste became known as "le goût Beistegui" (the Beistegui style).

On 3 September 1951 Beistegui held a masked costume ball, which he called Le Bal oriental, at the Palazzo Labia. It was one of the last truly spectacular events in the famous ballroom, and it was one of the largest and most lavish social events of the 20th century. Over one thousands invitations for Charles de Beistegui’s Le Bal Oriental were sent out six months prior to the night of 3rd September 1951 to give guests time to design their elaborate costumes. The event, inspired by Giovanni Battista Tiepolo’s fresco The Banquet of Cleopatra at his Palazzo Labia, would see desperate Americans anchoring their yachts at the Venice Lido in the hope of an invitation. The guest list included the Aga Khan III, Barbara Hutton, Gene Tierney, Countess Jacqueline de Ribes, Jacques Fath, Count Armand de La Rochefoucauld, Duff and Lady Diana Cooper, Orson Welles, Daisy Fellowes, Paul-Louis Weiller, Cecil Beaton, Gala Dalí, Baron de Chabrol, Desmond Guinness, Alexis von Rosenberg, Baron de Redé, Prince and Princess Chavchavadze, Arturo Lopez-Willshaw, Patricia Lopez-Willshaw, Dimitri Hayek, Fulco di Verdura, Deborah Cavendish, Duchess of Devonshire, Princess Natalia Pavlovna Paley, Nelson Seabra, Aimée de Heeren, Princess Ghislaine de Polignac, Princess del Drago, Princess Gabrielle Arenberg, Hélène Rochas, Princess Caetani, Princess Colonna, Prince Mathieu de Brancovan, the painters Fabrizio Clerici and Leonor Fini, and many others. Christian Dior and Salvador Dalí designed each other's costumes.[7] Winston Churchill and the Duke and Duchess of Windsor were invited but did not attend. The host wore scarlet robes and a long curling wig, and his normal height (5 ft. 6 in.) was raised a full 16 inches by platform soles.[2] Cecil Beaton's photographs of the ball are considered notable for capturing an almost surreal society, reminiscent of the Venetian life immediately before the fall of the republic at the end of the 18th century. The "party of the century" launched the career of Pierre Cardin, who designed about 30 of the costumes. Nina Ricci was another designer who was involved.

Despite this colossal extravagance and the enormously high-profile guest list he was able to attract, Beistegui did not generally warm to people, nor they to him.[5] He remained personally aloof and shadowy, and was often accused of treating his friends and mistresses very poorly. He never married, and although he was said to have had many mistresses, his sexuality was often the subject of speculation.[3]

After surviving a series of strokes around 1960,[3] he sold the Palazzo Labia to RAI.[5] Beistegui died in 1970 at 38 Avenue Maréchal Joffre in Biarritz, France, with a limited will.[1] His estate went to his brother, who did not want the Château de Groussay and gave it to his son Juan (Johnny) de Beistegui.[5] When the collection, which included many of the Palazzo Labia's former contents, was auctioned by Sotheby's (its first auction on French soil)[8] in 1999, it proved to be France's largest and most highly priced auction sale, realising $26.5 million.[3] The sale was described as "a major event in the history and sociology of the decorative arts".[3]

A documentary Don Carlos de Beistegui was made in 1989.[9]