Leonor Fini (30 August 1907 – 18 January 1996) was an Argentinian surrealist painter, designer, illustrator, and author, known for her depictions of powerful women.[1] The exhibition Lesbian Visions at the Schwules Museum from May 10 to August 20, 2018, brought into view artistic positions by queer FLT* (females, lesbians, trans) from over 100 years and displays works by more than 30 artists across six generations, including Leonor Fini.

Born in Buenos Aires, Argentina, she was raised in Trieste, Italy, her mother's home city. Custody battles often involved Fini and her mother in sudden flights and disguises.[2] She moved to Milan at the age of 17, and then to Paris, in either 1931 or 1932. There, she became acquainted with Carlo Carrà and Giorgio de Chirico, who inspired much of her work. She also came to know Paul Éluard, Max Ernst, Georges Bataille, Henri Cartier-Bresson, Picasso, André Pieyre de Mandiargues, and Salvador Dalí. She traveled Europe by car with Mandiargues and Cartier-Bresson where she was photographed nude in a swimming pool by Cartier-Bresson. The photograph of Fini sold in 2007 for $305,000 - the highest price paid at auction for one of his works to that date.[3]

Fini had no formal artistic training, yet she was familiar with the traditional Renaissance and Mannerist styles due to her upbringing in Italy.[4] Her first major exhibition was in 1936 in New York at Julian Levy’s Gallery.[3] Fini was considered part of a pre-war generation of Parisian artists, and outlived most of her artist peers. Surrealist artists in France became very interested in her once she began setting herself up as an artist, and came to know her as important in the movement. She is mentioned in most comprehensive works about surrealism, although some leave her out (and she did not consider herself a surrealist). In 1943, Fini was included in Peggy Guggenheim's show Exhibition by 31 Women at the Art of This Century gallery in New York.[5] In 1949 Frederick Ashton choreographed a ballet conceptualized by Fini, "Le Rêve de Leonor" (“Leonor's Dream") with music by Benjamin Britten. In London, she exhibited at the Kaplan gallery in 1960 and at the Hanover Gallery in 1967. In the summer of 1986 there was a retrospective at the Musée du Luxembourg in Paris that drew in more than 5,000 people a day. It featured over 260 works in a variety of media. A tribute to the many artistic and creative avenues that her career took throughout her lifetime, there were 100+ watercolors and drawings, around 80 theatre/costume designs, and about 70 paintings, 5 masks, etc. Many of her paintings featured women in positions of power; an example of this is the painting La Bout du Monde where a female figure is submerged in water up to her breasts with human and animal skulls surrounding her. Madonna used the imagery in her video, "Bedtime Story" in 1994. In the spring of 1987 she had an exhibition at London’s Editions Graphique’s gallery.[6] Fini was also featured in an exhibition entitled “Women, Surrealism, and Self-representation” at the San Francisco Modern Museum of Art in 1999.[7] 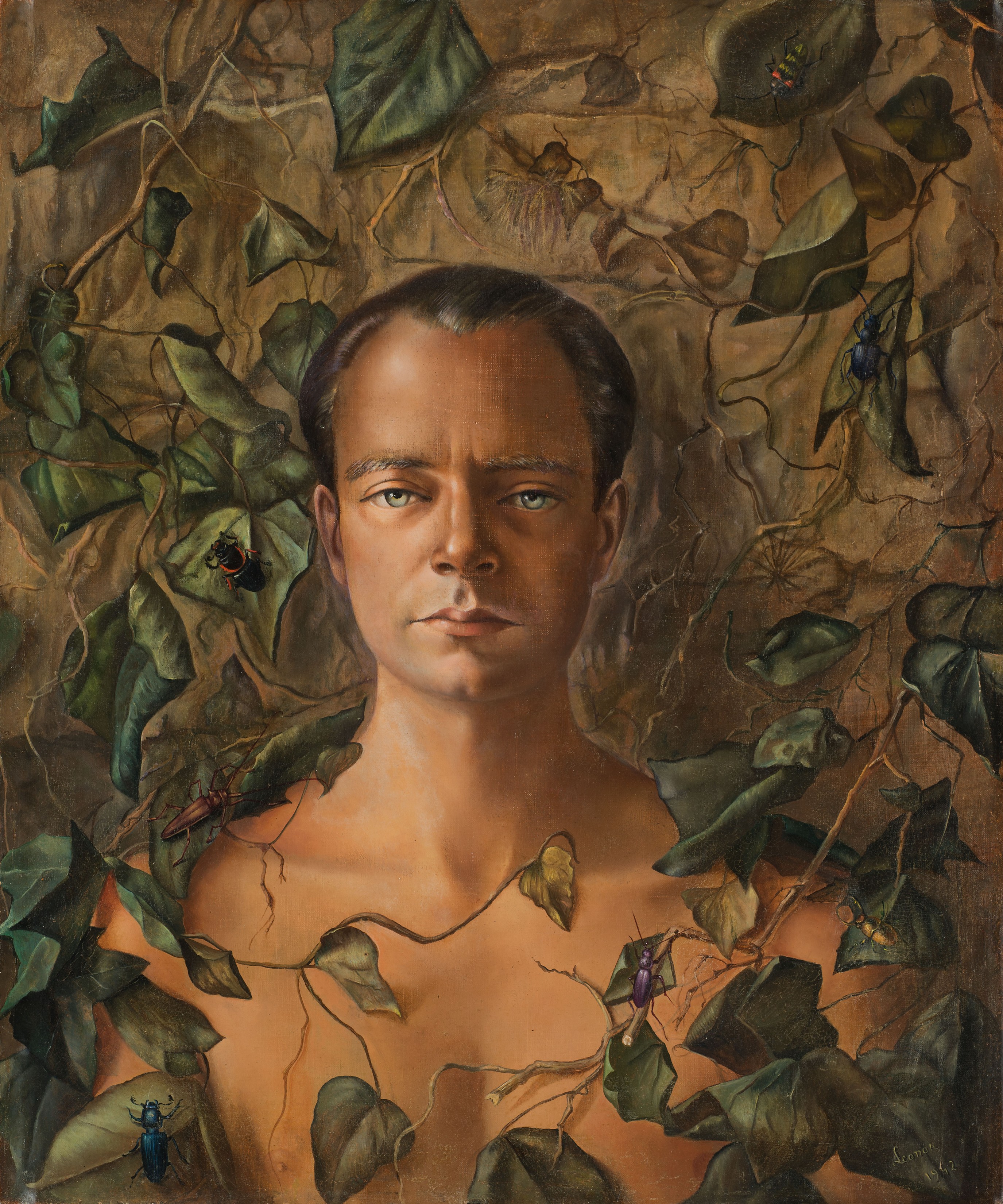 Leonor Fini - Self portrait with a red hat

She painted portraits of Jean Genet, Anna Magnani, Jacques Audiberti, Alida Valli, Jean Schlumberger and Suzanne Flon as well as many other celebrities and wealthy visitors to Paris. While working for Elsa Schiaparelli she designed the flacon for the perfume, "Shocking", which became the top selling perfume for the House of Schiaparelli.[8] She designed costumes and decorations for theater, ballet and opera, including the first ballet performed by Roland Petit's Ballet de Paris, "Les Demoiselles de la nuit", featuring a young Margot Fonteyn. This was a payment of gratitude for Fini's having been instrumental in finding the funding for the new ballet company. She also designed the costumes for two films, Renato Castellani's Romeo and Juliet (1954) and John Huston's A Walk with Love and Death (1968), which starred 18-year-old Anjelica Huston and Moshe Dayan's son, Assaf.[9]

In the 1970s, she wrote three novels, Rogomelec, Moumour, Contes pour enfants velu and Oneiropompe. Her friends included Jean Cocteau, Giorgio de Chirico, and Alberto Moravia, Fabrizio Clerici and most of the other artists and writers inhabiting or visiting Paris. She illustrated many works by the great authors and poets, including Edgar Allan Poe, Charles Baudelaire and Shakespeare, as well as texts by new writers. She was very generous with her illustrations and donated many drawings to writers to help them get published. She is, perhaps, best known for her graphic illustrations for Histoire d'O.

Fini is considered a great contributor to the feminist movement because her paintings often depict impertinent young women in scenes that empower their image.[2]

Leonor was a proud bisexual. She once said,

Marriage never appealed to me, I've never lived with one person. Since I was 18, I've always preferred to live in a sort of community - A big house with my atelier and cats and friends, one with a man who was rather a lover and another who was rather a friend. And it has always worked.[10]

Married once, for a brief period, to Federico Veneziani, they were divorced after she met the Italian Count, Stanislao Lepri, who abandoned his diplomatic career shortly after meeting Fini and lived with her thereafter. She met the Polish writer Konstanty Jeleński, known as Kot in Rome in January 1952. She was delighted to discover that he was the illegitimate half-brother of Sforzino Sforza, who had been one of her most favorite lovers. Kot joined Fini and Lepri in their Paris apartment in October 1952 and the three remained inseparable until their deaths.[11] She later employed an assistant to join the household, which he described as "a little bit of prison and a lot of theatre". One of his jobs was to look after her beloved Persian cats. Over the years she acquired as many as 23 of them; they shared her bed and, at mealtimes, were allowed to roam the dining-table selecting tasty morsels - and woe betide the guest who complained. The 'inner circle' expanded to include the American artist, Richard Overstreet and the Argentinian poet Juan-Bautista Pinero.

The "Catalogue Raisonée of The Oil Paintings of Leonor Fini," by Richard Overstreet and Neil Zukerman is scheduled for publication in late 2018 or early 2019.[13]