Percy Aldridge Grainger (born George Percy Grainger; 8 July 1882 – 20 February 1961) was an Australian-born composer, arranger and pianist who lived in the United States from 1914 on and became a citizen in 1918. In the course of a long and innovative career, he played a prominent role in the revival of interest in British folk music in the early years of the 20th century. Although much of his work was experimental and unusual, the piece with which he is most generally associated is his piano arrangement of the folk-dance tune "Country Gardens".

Grainger left Australia at the age of 13 to attend the Hoch Conservatory in Frankfurt. Between 1901 and 1914 he was based in London, where he established himself first as a society pianist and later as a concert performer, composer and collector of original folk melodies. As his reputation grew he met many of the significant figures in European music, forming important friendships with Frederick Delius and Edvard Grieg. He became a champion of Nordic music and culture, his enthusiasm for which he often expressed in private letters, sometimes in crudely racial or anti-Semitic terms.

Before leaving Frankfurt, Grainger had fallen in love with his piano tutor James Kwast's daughter Mimi.[16] In an autobiographical essay dated 1947, he says that he was "already sex-crazy" at this time, when he was 19.[17] John Bird, Grainger's biographer, records that during his Frankfurt years, Grainger began to develop sexual appetites that were "distinctly abnormal"; by the age of 16 he had started to experiment in flagellation and other sado-masochistic practices, which he continued to pursue through most of his adult life. Bird surmises that Grainger's fascination with themes of punishment and pain derived from the harsh discipline to which his mother Rose had subjected him as a child.[17] Some even have speculated that rampant rumors of incest may have driven Rose Grainger to commit suicide, when she threw herself out of an 18-story window in Manhattan in 1922. 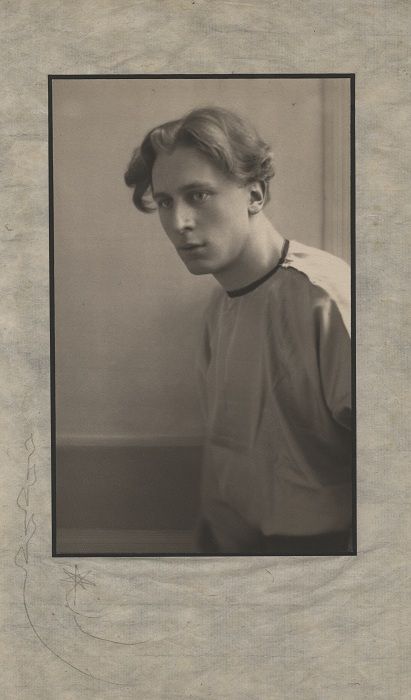 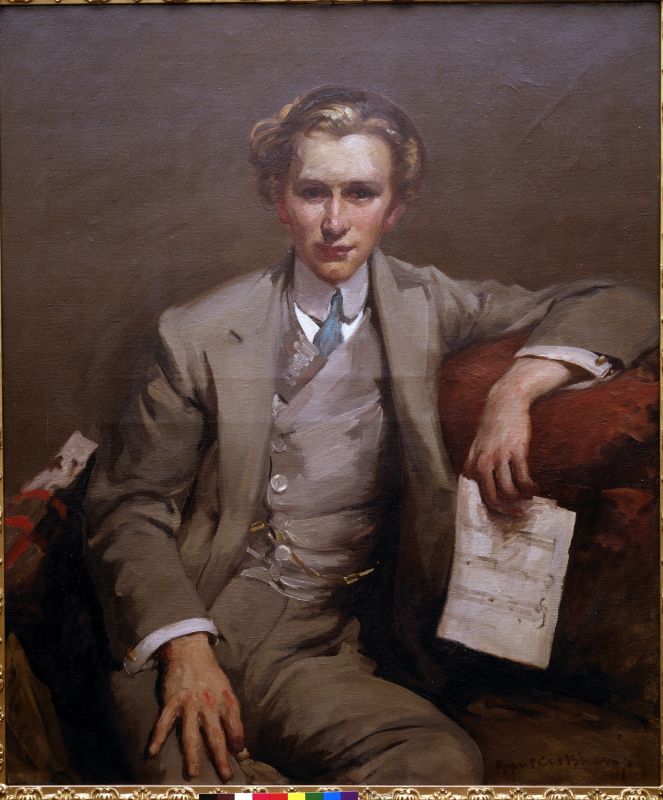 During his 1900s London years, Grainger was friendly with at least three gay men: Adolf de Meyer, Rupert Bunny and Jacques-Emile Blanche; all three of them took portraits of Grainger now in the University of Melbourne collection.

It is likely that Bunny met Grainger soon after arriving in London through his acquaintance with Nellie Melba and her circle (both men at home in ‘gay Paris’). Bunny (possibly) lived in a homosexual relationship in his youth. Through a mutual love of music the two formed a rapport and Grainger commissioned Bunny to paint his likeness around 1902. The painting depicts a relaxed young gentleman – fleeting inner tension represented in the taught fingers of Grainger’s right hand, knuckles appear reddened.

Blanche was successful Parisian born painter specialised in society portraits; the musician’s lover Lilith Lowry introduced Blanche to Percy. In 1902 in Dieppe, Blanche introduced Percy to the music of Debussy and later arranged a meeting between the two composers.

Robert Allerton began inviting (or attracting) young male artists to stay with him at Monticello, perhaps thinking of his house, The Farms, as a kind of one-man MacDowell colony, where quietude and devoted companionship would prove amenable to the Muse. One of the first intended guests was the English composer Roger Quilter, to whom Allerton was introduced at the von Glehns' salon in the winter season of 1910-1911. Their relationship soon intensified - it would be the only homosexual one to which Quilter ever admitted - and Allerton implored his new lover to stay with him at The Farms in the coming summer months. "I want to go very much," Quilter revealed to Percy Grainger (another confidant - and possibly bel ami), "& yet I hate the idea of the journey - & I don't want to be away from you for very long." In the end, Quilter never followed Allerton to Monticello; their affair was short-lived. But it must have left a deep impression, for more than a decade later (in 1928), Quilter dedicated a new composition to Robert Allerton: a complex scoring (for tenor voice and piano) of one of Shelley's most ardent lyrics, "I Arise from Dreams of Thee."

Given his own skill at the piano, John Singer Sargent was especially inclined to extend his generosity to keyboard virtuosos (such as Percy Grainger, Léon Delafosse, and Gabriel Fauré), with whom he often played four-handed duets. Percy Grainger was a friend of Leon Delafosse, who had premiered Gabriel Fauré's Theme et variations (a set that Grainger would later declare to be 'high favorites of mine") in London in 1896. He dedicated his early Paraphrase on Tchaikovsky's Flower Waltz to Delafosse, who performed it several times in London and reciprocally dedicated several piano preludes to Grainger.

In 1914, Grainger moved to the United States, where he lived for the rest of his life, though he travelled widely in Europe and in Australia. He served briefly as a bandsman in the United States Army during the First World War through 1917–18, and took American citizenship in 1918. After his mother's suicide in 1922, he became increasingly involved in educational work. He also experimented with music machines, which he hoped would supersede human interpretation.

In November 1926, while returning to America, he met Ella Ström, a Swedish-born artist with whom he developed a close friendship. On arrival in America the pair separated, but were reunited in England the following autumn after Grainger's final folk-song expedition to Denmark. In October 1927 the couple agreed to marry.[78] Ella had a daughter, Elsie, who had been born out of wedlock in 1909. Grainger always acknowledged her as a family member, and developed a warm personal relationship with her.[79] Although Bird asserts that before her marriage, Ella knew nothing of Grainger's sado-masochistic interests,[80] in a letter dated 23 April 1928 (four months before the wedding) Grainger writes to her: "As far as my taste goes, blows [with the whip] are most thrilling on breasts, bottom, inner thighs, sexparts". He later adds, "I shall thoroly thoroly understand if you cannot in any way see yr way to follow up this hot wish of mine".[81] The couple were married on 9 August 1928 at the Hollywood Bowl, at the end of a concert which, in honour of the bride, had included the first performance of Grainger's bridal song "To a Nordic Princess".[8]

From the late 1920s and early 1930s Grainger became involved increasingly with educational work in schools and colleges,[8] and in late 1931 accepted a year's appointment for 1932–33 as professor of music at New York University (NYU). In this role he delivered a series of lectures under the heading "A General Study of the Manifold Nature of Music", which introduced his students to a wide range of ancient and modern works.[8]

In the 1930s he set up the Grainger Museum in Melbourne, his birthplace, as a monument to his life and works, and as a future research archive.

While the building of the museum proceeded, the Graingers visited England for several months in 1936, during which Grainger made his first BBC broadcast. In this, he conducted "Love Verses from The Song of Solomon" in which the tenor soloist was the then unknown Peter Pears.[90] After spending 1937 in America, Grainger returned to Melbourne in 1938 for the official opening of the Museum; among those present at the ceremony was his old piano teacher Adelaide Burkitt. The museum did not open to the general public during Grainger's lifetime, but was available to scholars for research.[91][92]

As he grew older, he continued to give concerts and to revise and rearrange his own compositions, while writing little new music. After the Second World War, ill health reduced his levels of activity.

By 1957 Grainger's physical health had markedly declined, as had his powers of concentration.[104] Nevertheless, he continued to visit Britain regularly; in May of that year he made his only television appearance, in a BBC "Concert Hour" programme when he played "Handel in the Strand" on the piano. Back home, after further surgery he recovered sufficiently to undertake a modest winter concerts season.[105] On his 1958 visit to England he met Benjamin Britten, the two having previously maintained a mutually complimentary correspondence.[106] He agreed to visit Britten's Aldeburgh Festival in 1959, but was prevented by illness. Sensing that death was drawing near, he made a new will, bequeathing his skeleton "for preservation and possible display in the Grainger Museum". This wish was not carried out.[107]

Grainger gave his last concert in 1960, less than a year before his death. Grainger died in the White Plains hospital on 20 February 1961, at the age of 78. His body was flown to Adelaide, where his funeral service was conducted on 2 March in St Matthew's Church, in the eastern suburb of Marryatville, the venue of his parents' marriage in 1880.[112] His remains were buried in the Aldridge family vault in the West Terrace Cemetery, alongside Rose's ashes.[7]