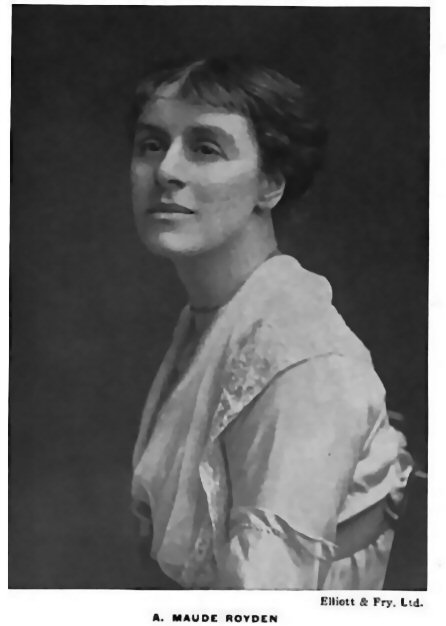 Agnes Maude Royden (November 23, 1876 - July 30, 1956) was an English preacher, suffragist and campaigner for the ordination of women. Her name and picture (and those of 58 other women and men's suffrage supporters) are on the plinth of the statue of Millicent Fawcett in Parliament Square, London, unveiled in 2018.

Maude Royden, who adored her Rutland vicar for decades before managing an extremely brief marriage to him, loved not only him but his wife, and a woman she met when a student at Oxford in the 1890s, Kathleen Courtney, herself a great peace campaigner and suffragist. Of Effie, the vicar’s wife, Royden wrote, I fell in love with her, too, at first sight. Royden’s letters to Courtney from the vicarage in South Luffenham were sprinkled with passionate endearments: Dear little Kathleen I do so awfully want to see you. Consider yourself kissed!; Oh beloved, rejoice with me! I am so fearfully happy here, but I want you dear, so badly, & don’t ever seem to have had as much as I am hungry for; There is a kiss in the envelope. Did you find it? she asked from a hotel in Bellagio on an Italian holiday. Here is Kathleen Courtney, reflecting on her intense relationship with Maude Royden, formed in their university days: We made great and lasting friendships but they were not lesbian (of course we did not know that word in those days). Our friendships were founded on some sort of affinity, a community of mind.

Royden was born in Mossley Hill, Liverpool, the youngest daughter of shipowner Sir Thomas Bland Royden, 1st Baronet. She grew up in the family home of Frankby Hall with her parents and seven siblings. She was educated at Cheltenham Ladies' College and Lady Margaret Hall, Oxford where she gained a degree in History.[2] While at Oxford she started a lifelong friendship with fellow suffragist Kathleen Courtney who had the same alma mater.[3] Afterwards, Royden worked for three years at the Victoria Women's Settlement in Liverpool[2] and then in the country parish of South Luffenham, Rutland, as parish assistant to the Rector, George William Hudson Shaw. She lectured on English literature for the university extension movement and in 1909 was elected to the executive committee of the National Union of Women's Suffrage Societies. From 1912 to 1914 she edited The Common Cause, the organ of the NUWSS.[2] She was also active in the Church League for Women's Suffrage. In 1913 she was invited, with the backing of Lavinia Talbot to talk to the all-male Church Congress about White Slavery.[4] Royden broke with the NUWSS over its support for the war effort and was among the 101 signatories of the Open Christmas Letter in 1914. She became the secretary of the Fellowship of Reconciliation with other Christian pacifists. Although unable to travel to the women's peace congress in the Hague in 1915, where the Women's International League for Peace and Freedom was established, she became the vice-president of the league.[3] Royden became well known as a speaker on social and religious subjects. In a 16 July 1917 speech at Queen's Hall, London, she used the oft-quoted phrase 'the Conservative Party at prayer' of the Church of England; "The Church should go forward along the path of progress and be no longer satisfied only to represent the Conservative Party at prayer."[5] In 1917 she became assistant preacher at the Congregationalist City Temple, London, the first woman to occupy this office.[2] After the First World War, Royden's interest shifted to the role of women in the Church. While attending the Eighth Conference of the International Woman Suffrage Alliance at Geneva in 1920, she preached in French and English at St Pierre Cathedral on 6 June.[6] Royden made several worldwide preaching tours from the 1920s to the 1940s.

Mary Stocks, Eleanor Rathbone, Alison Neilans, Edith Picton-Turbervill and Maude Royden were, as representatives of the NUSEC, among the delegates at the tenth congress of the International Alliance of Women for Suffrage and Equal Citizenship (IAWSEC) in 1926. The Board of the Alliance at the time was presided over by Margery Corbett Ashby and included among the international complement of its board members, Bessie Rischbieth of Australia who was also on the Finance Committee. Rathbone was the ‘chairman’ of the international committee on “Family Endowment or Allowances.” Alison Neilans represented the Association for Moral and Social Hygiene. The international matrix at this congress comprised hundreds of women, many of whom were self-declared feminists and who represented national and international organisations. Dr. Muthulakshmi Reddi was among the Indian delegates.

In 1929 she began the official campaign for the ordination of women when she founded the Society for the Ministry of Women. Royden "eminent in the religious life of the nation" was appointed to the Order of the Companions of Honour in the 1930 New Year Honours.[7] Her older brother Thomas had been made a Companion in 1919 (for his work relating to shipping in the First World War)[8] and they are the only siblings to be Companions of Honour. In 1931 Glasgow University conferred the honorary degree of Doctor of Divinity on Royden, the first woman to become a Doctor of Divinity in Britain. In 1935 she was awarded an honorary degree of Doctor of Laws by the University of Liverpool.[9] She received an honorary degree from Mills College, California in 1937. She joined the Peace Pledge Union but later renounced pacifism, believing Nazism to be a greater evil than war.

On November 3 1938, a large group of Neilans' feminist friends and colleagues wrote a letter to the editor of The Times requesting donations for a presentation of a gift to Alison Nielans. Among the women signatories of the “wide circle of friends” who wished “to pay a public tribute to the magnificent work” Nielans had accomplished were Nina Boyle, Nancy Astor, Margery Corbett Ashby, Marjorie Nunburnholme, Eva Harterr, Vera Laughton Matthews, Maude Royden, Jane Walker and Helen Wilson. Nina Boyle, Dr. Maude Royden and Nancy Astor were among the speakers. Nancy Astor “proposed Miss Nielans’s health,” and demonstrated the quick wit she was known for in claiming that Nielans’ successful contribution to the raising of the age of consent bill “had changed the lives of thousands of men throughout the world”. The Times did not report the content of Nina Boyle’s and Maude Royden’s speeches but quoted the Archbishop of York’s admiration that Nielans “manfully stood for the fundamental unity of moral law and ideal for all persons, races and sexes”. Several lesbians and spinsters in the international feminist sorority were attributed with masculine characteristics in association with their work. Nina Boyle was considered “mannish.” Alison Neilans was seen as “manfully” carrying out her duties. Katharine Furse was remembered in obituaries, as much for her physical prowess as a champion skier, as for her role in international feminism.

On 2 October 1944, she married the recently widowed priest Hudson Shaw, whom she had loved for more than forty years; he was then aged 85 and died on 30 November. She wrote in her 1947 autobiography A Threefold Cord of their love for each other from first meeting in 1901. At the end of the Second World War, it was discovered that Royden, along with her brother Sir Thomas Royden, were listed in 'The Black Book' or Sonderfahndungsliste G.B., a list of Britons who were to be arrested in the event of a Nazi invasion of Britain.[10][11] On 30 July 1956 she died at her home in Hampstead, London.

A blue plaque was unveiled at her childhood home of Frankby Hall, Wirral in June 2019 by Conservation Areas Wirral. Frankby Hall, built in 1846 for the Royden family, was sold in 1933. Now used as chapels for Frankby Cemetery. Papers of Agnes Maude Royden are held in The Women's Library at London Metropolitan University.