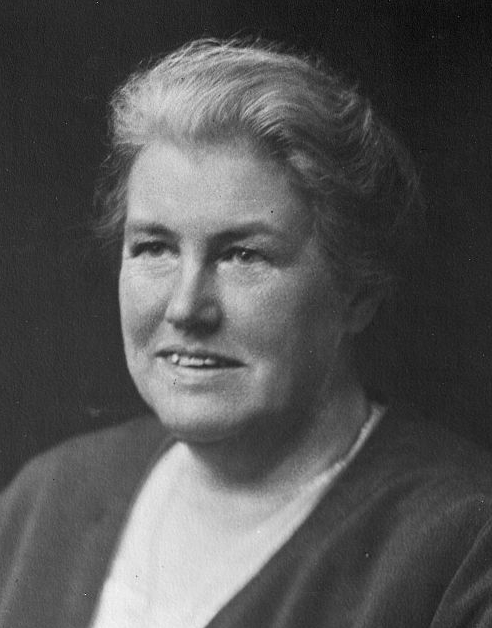 Dame Louisa Brandreth Aldrich-Blake DBE (15 August 1865 – 28 December 1925)[1][2][3] was the first woman Master of Surgery in 1895. She was a friend of Octavia Wilberforce. Dr Louisa Martindale was a member of the Lyceum Club, though how often she was able to attend, being based on the south coast of England, is unclear. But then Brighton had its own social scene, particularly for the women medics who seem to have gathered there (as they did on Nottingham Place in London, incidentally, where Louisa Aldrich-Blake lived at no. 17; her predecessor as dean of the LSMW – with the resplendent name of Julia Ann Hornblower Cock – at no. 15; other LSMW graduates at no. 10; and Samuel Garrett, the brother of Dr Elizabeth Garrett Anderson and Millicent Fawcett, at no. 13).

She was a pioneering surgeon and one of the first British women to enter the world of modern medicine. Surgeon Louisa Aldrich-Blake, nicknamed ‘Madame la Générale’ during the time she spent at Royaumont, lived with her friend Rosamond Wigram. Dr Octavia Wilberforce described Dr Louisa Aldrich-Blake as ‘a tall, massive individual who wore a stiff collar and a tie like a man’s’. Aldrich-Blake enjoyed boxing and cricket, and was a skilled mechanic. Those who described her, usually with affection, noted that she was not really built for romance. She loved young people; she kept the same maid, Florence, for twenty-five years; and she and the friend with whom she shared her house, Rosamond Wigram, used to go out for drives together on Sunday afternoons in Louisa’s beloved motor car. She obviously inspired loyalty and lived a pleasant life. Whether she and Rosamond were lovers is a moot point; her biographer thinks not.

Unlike the mass of women who had female partners during the period 1890-1960, there is information about a fascinating group of pioneering women doctors in Britain: there are biographies and auto-biographies, appearances in contemporary reminiscences and surveys of successful women, obituaries and entries in the Dictionary of National Biography and Who's Who. These particular women — Louisa Martindale, Louisa Aldrich-Blake, Flora Murray, Octavia Wilberforce and their partners — formed a relatively cohesive group united by their common profession of medicine and by geographical location, social class, and strong ties of friendship and respect. However, while there is a relative profusion of material charting their lives, its emphasis is on their professional, rather than their personal, lives. It is these women's careers as doctors, the hospitals in which they worked, the practices they built up, the research articles that they wrote, in essence the contribution that they made to medicine, that is the focus of interest.

Born in Chingford, then a village in Essex, she was the eldest daughter of a curate. Louisa Aldrich-Blake graduated in medicine from the Royal Free Hospital in 1893. She obtained her Master of Surgery degree and was a lead surgeon by 1910.[3] Louisa volunteered for military medical service during the First World War. She was one of the first people to perform surgery on rectal and cervical cancers.[4] In recognition of her commitment and achievements, a statue was erected in Tavistock Square, London. This statue's position is close to her alma mater.[4]

Louisa Aldrich-Blake was born in Chingford, Essex to Rev Frederick James Aldrich-Blake and Louisa Blake Morrison.[3][5] She moved with her family to Welsh Bicknor in Herefordshire during her childhood, and maintained a home in the town until her death. Throughout her career, Aldrich-Blake was associated with the Elizabeth Garrett Anderson Hospital,[3] becoming senior surgeon in 1910. Aldrich-Blake began her school education at Cheltenham Ladies' College. She graduated with first-class honours from the London School of Medicine for Women by 1894 as a Bachelor of Science, Bachelor of Medicine and an MD. Ongraduating from the University of London Aldrich-Blake followed with a masters in surgery a year later.[4] She went on to take the University of London's higher degrees in Medicine and Surgery, becoming the first British woman to obtain the degree of Master of Surgery.[6]

The newly qualified Aldrich-Blake began work at the New Hospital for Women and Children in London. She worked her way up to become the lead surgeon while also working at the city's Royal Free Hospital.[4] At the Royal Free Hospital, she was the first woman to hold the post of surgical registrar in 1895 and also acted as an anaesthetist. Her position as consulting surgeon at the Royal Free started in 1919 and ended when she died in 1925. She also worked at the Canning Town Women's Settlement Hospital.[4] During the First World War, many of the male surgical staff were deployed on foreign active service and Dr. Aldrich-Blake took on increased responsibility for the surgery, becoming consulting surgeon to the hospital. Aldrich-Blake spent multiple holidays aiding the military hospitals in 1914 to 1916, specifically in France with Dr. Frances Ivens from the Anglo-French Red Cross Hospital and helped out as a visiting surgeon at the Women's Army Auxiliary Corps Hospital.[3] Aldrich-Blake was nicknamed "Madame la Générale" by her patients. Her time was also spent contacting other women in the profession to organise volunteer units.[4] She approached every woman on the Medical Register to ask if they would consider volunteering for the Royal Army Medical Corps, and 48 enrolled, many of whom were sent to Malta.[7] Aldrich-Blake was the first to perform operations for cervical and rectal cancers. She led the British surgeons in taking on the Wertheim operation for carcinoma of the cervix.[4] Aldrich-Blake added a piece to the Practitioner's Encyclopedia of Midwifery and Diseases of Women named "Pain as a symptom of pelvic trouble" and a piece on "Abdomino-perineal excision of the rectum by a new method" in the British Medical Journal in 1903.[8] She held a chair position as a vice-president of the Section of Obstetrics and Gynaecology in 1924 that was a part of the British Medical Association. Although she had a professional practice, Aldrich-Blake never received a sizeable salary for her work.

Aldrich-Blake was devoted to training students at her alma mater, the London School of Medicine for Women (now the medical school of University College London).[6] She became Vice-Dean in 1906 and Dean of the School in 1914.[3] Aldrich-Blake's encouragement for women to join the medical field increased the school's population by almost double during the First World War.[3]

Aldrich-Blake died on 28 December 1925 from cancer at home having undergone several operations during previous weeks. St Pancras Church, in London, celebrated her life on 1 January 1926 and her ashes were transferred back to her home in Welsh Bicknor.[3] The Dame Louisa Brandreth Aldrich-Blake Collection is located in the Royal Free Hospital's Archives Centre. A statue of her is in Tavistock Square, London.[4] Her career was highlighted in a 2015 exhibit specifically related to her actions in the First World War where she performed surgery on the front line and encouraged other women to join the field. She also influenced the War Office to allow women to enlist to be a part of the medical staff.[9] In 2019, she was acknowledged with a Google Doodle for the UK, Ireland, Canada, Australia, New Zealand, Israel, Bulgaria, Sweden, Denmark, Estonia, and Iceland on the 154th anniversary of her birth.[10][11]

In the year of her death, Aldrich-Blake was named a Dame Commander of the Order of the British Empire on the New Year's Honours List in 1925.[1][12]