Dr. Louisa Martindale, CBE, MB/BS (Lond.), FRCOG, JP (30 October 1872 – 5 February 1966) was an English physician, surgeon, and writer. She also served as magistrate on the Brighton bench, was a prison commissioner and a member of the National Council of Women. She served with the Scottish Women's Hospitals at Royaumont Abbey in France in World War I, and as a surgeon in London in World War II. Through her writings she promoted medicine as a career for women. Dr Louisa Martindale enjoyed a lifelong relationship with the Hon. Ismay FitzGerald, whom she met in 1910. The two women found each other on the doorstep of a dinner party with a barrister friend of Millicent Fawcett’s, ‘and we laughed’, recalled Martindale, ‘because we were both attired in cream lace dresses’. Martindale said of FitzGerald: “A broadminded and tolerant Irish Roman Catholic, keen on horse racing, with a legal mind, lovable, real Irish character, full of contradiction and charm.” For someone like Louisa, in a tough profession, breaking the boundaries and making her mark in a male dominated world, Ismay was a great breath of fresh air. When FitzGerald’s mother died, Martindale invited FitzGerald to visit for a fortnight and she stayed for 35 years. With Fitzgerald, Martindale wrote, she had found her "full share of love and friendship." One of Louisa "Lulu" Martindale and Ismay FitzGerald’s closest friends on the south coast was Dublin-born Dr Helen Boyle, who ran a general practice in Hove with her partner Dr Mabel Jones. Louisa Martindale was a friend and neighbour of Octavia Wilberforce.

Unlike the mass of women who had female partners during the period 1890-1960, there is information about a fascinating group of pioneering women doctors in Britain: there are biographies and auto-biographies, appearances in contemporary reminiscences and surveys of successful women, obituaries and entries in the Dictionary of National Biography and Who's Who. These particular women — Louisa Martindale, Louisa Aldrich-Blake, Flora Murray, Octavia Wilberforce and their partners — formed a relatively cohesive group united by their common profession of medicine and by geographical location, social class, and strong ties of friendship and respect. However, while there is a relative profusion of material charting their lives, its emphasis is on their professional, rather than their personal, lives. It is these women's careers as doctors, the hospitals in which they worked, the practices they built up, the research articles that they wrote, in essence the contribution that they made to medicine, that is the focus of interest. 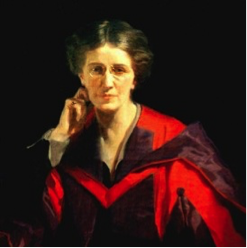 Louisa Martindale was born in Leytonstone, Essex, the first child of William Martindale (c. 1832–1874) and his second wife Louisa Spicer (1839–1914). The family had a Congregational Church background. Her mother, "a champion of a larger life for women",[1] was an active suffragist and a member of the Women's Liberal Federation, and of the executive committee of the National Union of Women's Suffrage Societies. In the 1880s, Mrs. Martindale held open house for Brighton shop girls on a regular basis, and young Louisa would have grown up in an environment supportive of her future career.[2] After the death of William Martindale the family moved to Cornwall, and thence to Germany and Switzerland, finally returning to England to live in Lewes, East Sussex. In 1885 the family moved again, this time to Brighton so that Louisa and her sister Hilda Martindale could attend Brighton High School for Girls. From an early age it had been decided that Louisa should become a doctor, and at 17 she was sent to Royal Holloway, University of London in Egham and obtained her London Matriculation in 1892. She then entered the London School of Medicine for Women in 1893, gaining her MB in 1899, and her BS. In 1900 she went north to Hull as an assistant to Dr. Mary Murdoch, the beginning of her professional life. Murdoch and Martindale worked closely as they were partners in their business. In 1902 they went on a cycling holiday together visiting Vienna, Berlin and Switzerland. They were in partnership until 1906.[3]

After five years in Hull, in 1906 Martindale gained her Doctor of Medicine and returned to Brighton. She started her own general practice and very soon was asked to join the Lewes Road Dispensary for Women and Children (which in 1911 became the Lady Chichester Hospital, Brighton Branch) as a visiting medical officer. In 1920 she was instrumental in the setting up of the New Sussex Hospital for Women in Windlesham Road, Brighton, and held the post of senior Surgeon and Physician there until 1937. She left Brighton and Hove in 1922, moving to London to start a Surgical Consultant Practice but continued to operate part-time at the New Sussex Hospital. After moving to London as a Consultant Surgeon, Louisa soon became known as honorary surgeon at the Marie Curie Hospital. In 1931, Martindale was elected as President of the Medical Women's Federation. She was appointed C.B.E. that same year. Two years later, she was elected a Fellow of the Royal College of Obstetricians and Gynaecologists. In 1937, Martindale was appointed to the Council of the Royal College of Obstetricians and Gynecologists as the first woman member in history.[4] Martindale's medical interests were sometimes controversial, especially her studies of venereal disease and prostitution. Her book Under the Surface (1909), in which she spoke quite openly about these very topics,[5] apparently caused a stir in the House of Commons. She also laid the groundwork for research in the treatment of uterine cancer and fibroid growths in women by means of intensive X-ray therapy.[6] She secured a long and distinguished life and career in medicine, carrying out over 7000 operations. Her work brought her respect and acknowledgment from both her colleagues and her patients: she was made a Fellow of the Royal College of Obstetricians in 1933, and was a member of the Royal Society of Medicine. Eventually she became a specialist in the early treatment of cervical cancer by X-ray and she later lectured extensively throughout the UK, the United States, and Germany.

An active member of the Brighton Women's Franchise Society, she also served as Magistrate for many years on the Brighton bench, became President of the Medical Women’s Federation in 1931, was a Prison Commissioner and a member of the National Council of Women. She served with the Scottish Women’s Hospitals at Royaumont Abbey in France in World War I, and as a surgeon in London in World War II. Martindale never married and lived for more than three decades with another woman, Ismay FitzGerald[7] (c. 1875-1946), daughter of Baron FitzGerald of Kilmarnock. Some scholars are wary of identifying Martindale as a lesbian. Geoffrey Walford, for instance, does not state whether Martindale's "woman-centered lifestyle" specifically entailed a lesbian relationship.[8] Others are more explicit and unhesitatingly propose Martindale's lesbianism,[9] referring for instance to her 1951 autobiography A Woman Surgeon, in which she writes quite openly and tenderly (though without giving explicit detail) about her love for FitzGerald.[10]

Martindale retired from practice in 1947. She died in her home in London on 5 February 1966, aged 93. Dr Lulu Martindale passed away twenty years after her beloved Ismay, in 1966. She was ninety-three, busy and cheerful to the end, assuring friends that she had had her full share of love and happiness, and was content.