He was the youngest of six children of a working-class family and had three brothers and two sisters. His family lived in Schulstraße 17, not far from today's subway station Leopoldplatz.[2]

When he was a student he met Magnus Hirschfeld after a lecture in Munich around 1918.[3] Later, Giese became an employee in Institut für Sexualwissenschaft and finally a lover of Hirschfeld. He took over the management of the archive of Institut für Sexualwissenschaft. Hirschfeld described their relationship as a "physical-mental connection". Giese also gave lectures, curated exhibitions and wrote articles.[4]

During this time, Giese met the British archaeologist Francis Turville-Petre and the French author and later Nobel Prize laureate André Gide. British-American writer Christopher Isherwood, who lived for some months in the neighboring building, wrote about himself and Karl Giese:[2]

Christopher saw in him the sturdy peasant youth with a girl’s heart, who long ago had fallen in love with Hirschfeld, his father-image. Karl still referred to Hirschfeld as "Papa".

Ellen Bækgaard, a dentist from Copenhagen and World League for Sexual Reform committee member, describes Giese in her memoirs as "woman of the house". According to Bækgaard, Giese enjoyed decorating the place and doing needlework, as well as looking after Hirschfeld's wardrobe.[3] 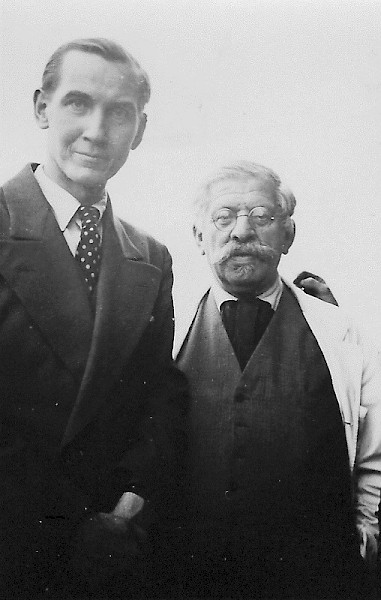 Karl Giese and Tao Li in front of the Institute for Sexual Science in Berlin, 1932 (Magnus Hirschfeld Society)

Karl Giese was interested in theater and acting. He was part of a theater group Theater der Eigenen. Giese also had a role as the young violinist Paul Körner in Richard Oswald's film Different from the Others [2]

When Magnus Hirschfeld traveled on world tour in 1930, he entrusted Giese to run the affairs of the institute.[5]

Hirschfeld did not return to Germany from his world journey in 1932, and Giese went to meet him in Paris. He found Hirschfeld living with another partner, 23 year old Chinese medical student Li Shiu Tong. Despite some initial jealousy, they all lived together in Paris in a menage a trois.

After the Institut für Sexualwissenschaft in Berlin fell victim to the Nazi Regime with books from its library burned, Giese spent several months in Brno in 1933 trying to purchase surviving literature from the Institut's archives. He also made contact with the magazine, Nový Hlas: list pro sexuální reformu (New Voice: Journal of Sexual Reform), arranging the publication of some articles by both Hirschfeld and himself.

In 1934, Karl Giese was caught having sex with another man in a public bathhouse and sentenced to three months in prison on charges of "arousal of public annoyance". As a result of his imprisonment, Giese's residence permit was not extended and he was forcibly required to leave France in October 1934.[2] He then went to Vienna and lived there for a year, studying for matriculation exams. Hirschfeld, Bækgaard and Norman Haire provided him with money for living and studying. Hirschfeld and other Giese benefactors hoped for him to study medicine in London after completing exams in Vienna.[6]

After Hirschfeld's death in 1935, Giese managed to return to Nice for the funeral. Two months before his death, Hirschfeld had named his two lovers, Li Shiu Tong and Karl Giese, as his sole heirs. However, Hirschfeld stipulated in his will that both men use their inheritance for the purposes of sexual science and not for personal use. Karl Giese was awarded the library and the objects that had been saved from the Institut für Sexualwissenschaft. Eventually he wasn't able to use his inheritance. Norman Haire privately provided Giese with financial help in the hopes he'd settle in Britain as per Hirschfeld's wishes. However, Giese moved to Brno in 1936 and lived with Karel Fein for several months before moving into his own flat.[7]

In March 1938 Karl Giese committed suicide in Brno. His heir, the lawyer Karl Fein, was deported and murdered by the Nazi regime in 1942. All of Giese's possessions, including his inheritance from Hirschfeld, have since been lost.

A memorial plaque was laid in front of his former residence in Berlin-Tiergarten, John-Foster-Dulles-Allee 10 on February 9, 2016.