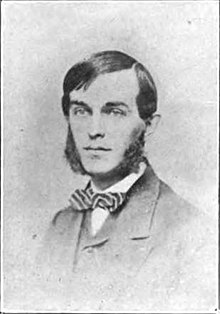 John Safford Fiske (January 18, 1838 - June 11, 1907) was a Consul of the United States at Leith, Scotland, who was involved in an homosexual scandal, and therefore forced to leave his post.

From 1863 to 1864 he worked as a deputy clerk in Albany for the New York State Senate. In 1865 he was a private tutor near New York City. In October 1867 he was nominated by President Andrew Johnson the United States consul in Leith, Scotland.[3][1][2]

While abroad he was involved in the scandal concerning Ernest Boulton and Frederick Park. In 1868 Boulton and Park were in Edinburgh and Fiske had an affair with Ernest Boulton, and even after Boulton went back to London, Fiske continued to send love letters to him. In 1870 Fiske was in London, where he was arrested and charged with "conspiracy to commit buggery". He decide to resign as a United States consul to avoid the involvement of his country in the scandal, even if he continued to maintain that he was innocent. In 1871, Fiske was acquitted, due to the fact there were no evidences against him if not the letters he sent to Boulton.[4]

After the trial, Fiske went to Düsseldorf, Germany, where he lived for one year, spending most of the time painting, almost exclusively architectural subject. The following three years Fiske was back in the United States, but in May 1874 he was again in Europe, where he lived for the rest of his life, first in Düsseldorf, and then Pinneberg (Holstein), Ecouen, near Paris (where he lived "with an English friend"), and from 1876 to 1877 in Constantinople. In the end Fiske settled in Italy, at Alassio, in 1882.[1][2]

In 1873 he published a translation of Caine's Voyage aux Pyrénées. He also wrote of current events to various newspapers, from Sweden, Russia, Germany, Turkey, Greece, and Italy. He contributed to The Nation (New York) since its founding. In 1893 he contributed a good number of articles to the Dictionary of Architecture, edited by Russell Sturgis. He was a reporter for the World's Columbian Exposition in Chicago in 1893. He and was a lecturer on art and architecture at Hobart College, Geneva, New York. In 1897 he received a L.H.D (honorary degree) from Hobart College and when he died in 1907, he left 4,000 books to the college.[1][2] Among these are John Addington Symonds' multivolume history of Italy, Oscar Wilde's Picture of Dorian Gray, and an English edition of Walt Whitman's poems.

A memorial to Fiske, by his friend Joseph Hetherington McDaniels, a Hobart professor of Greek language and literature, reveals that Fiske had guided historian Edward Augustus Freeman in his travels and research for a book on Sicily, and "had been the intimate companion of the scholar and diplomatist, Eugene Schuyler, in voyages through the Levant and the Aegean sea." Fiske, Freeman, and Schuyler had constituted a "brace of comrades." McDaniels had visited Fiske's villa in Alassio, and recalled his "bewitching garden which he opened hospitably and freely to his friends" and the many "pictures which were mostly mementos of beloved artist friends." McDaniels called Fiske "a sweet soul that gave much and asked no praise, but affection. And that affection he certainly had."