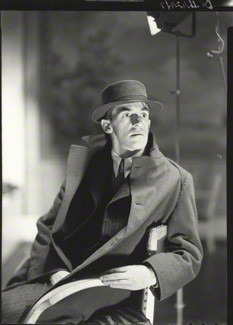 John Frederick Norman Hampson Simpson (26 March 1901 – 26 December 1955), who wrote as John Hampson, was an English novelist. Best known for his 1931 novel Saturday Night at the Greyhound – an unexpected success for the Hogarth Press – he was a member of the Birmingham Group of working class authors, which included Walter Allen, Leslie Halward, Walter Brierley and Peter Chamberlain. His elder brother was a motorcycle racer, Jimmy Simpson (James Hampson-Simpson). On 20 May 1936, he married the Lesbian German actress Therese Giehse to allow her to obtain a British passport and avoid capture by the Nazis.

Hampson was born in Handsworth in Birmingham. Prevented by ill health from completing his formal education, Hampson worked in a munitions factory in World War I and held a variety of jobs in Nottingham and Derbyshire in subsequent years, such as a waiter, a chef and a billiard-marker, and running a pub with his sister. A conviction for shoplifting books meant serving a prison term in Wormwood Scrubs.[1] In 1925 he was offered employment by a wealthy family in Dorridge, Solihull, as a residential nurse and companion for their son Ronald, who had Down syndrome. The security provided allowed him to start writing. He made a number of literary friends, including Forrest Reid, J. R. Ackerley, William Plomer, John Lehmann, and E. M. Forster.[2]

On Plomer's advice Hampson sent three manuscripts to Leonard Woolf and Virginia Woolf's Hogarth Press. Despite considering the longer O Providence "much the better book", they selected Saturday Night at the Greyhound as most suitable as a first publication.[3] The third manuscript was Go Seek a Stranger, the first novel Hampson had written, which remained unpublished due to its explicit homosexual subject-matter,[2] although Virginia Woolf later remarked, in a letter to William Plomer "I still think his first purely sodomitic novel the best".[3] Although the Woolfs considered Hampson a good writer, they had been pessimistic about his commercial potential, but Saturday Night at the Greyhound was to prove a success both critically and in terms of sales – quickly selling out its first print run and being reprinted twice in its first six months.[3] Its later paperback edition by Penguin Books sold 80,000 copies, and it was published in the US by Alfred Knopf and in France by Gallimard and republished again in 1950 and 1986.[2] His short stories were published in prestigious literary magazines throughout the 1930s but his second published novel O Providence sold less well than his first, and his next – Foreign English, based on his 1931 trip to Berlin – was rejected by the Hogarth Press, whom he subsequently left for Heinemann. He was to publish five more novels, but none matched the success of his first.[3] In 1933, through the American critic Edward J. O'Brien, Hampson met Walter Allen and the other writers who came to be known as the Birmingham Group[4] including Leslie Halward, Peter Chamberlain and Walter Brierley, whose novel Means Test Man Hampson provided assistance with. Hampson became a committed anti-Nazi after a visit to Berlin in 1933, and in 1936, at the suggestion of W. H. Auden, married the German actress Therese Giehse, so that she could obtain a British passport and escape from Nazi Germany.[2] He worked for the BBC during World War II and visited India in 1948. Hampson had a notable appearance: very small stature, a protruding lower jaw, searching eyes; he invariably dressed entirely in shades of brown and normally wrote in brown ink.[5]

The death of his employer in 1955 saw him leave the house in Dorridge when it was sold, and he died of a heart attack, lonely and virtually homeless, on 26 December.[1]