Jane Erin Emmet de Glehn (born Jane Erin Emmet in 1873; died 20 February 1961)[1] was an American figure and portrait painter. Robert von Glehn’s grandson (and therefore Louise Creighton's nephew), Wilfrid de Glehn and his wife Jane Erin Emmet were subjects of a painting by John Singer Sargent at the fountain at Villa Torlonia, Italy. Both artists, she was a cousin of the novelist Henry James. Wilfrid de Glehn was a friend of William Bruce Ellis Ranken. Jane Emmet de Glehn and mezzo-soprano Susan Metcalfe knew each other since their shared childhood in New Rochelle.

Born in New Rochelle, New York, Jane Erin Emmet was the youngest daughter of ten siblings.[2] Her great-great-uncle Robert Emmet was a notable Irish nationalist who was hanged in 1803 for high treason by the British court for his attempt to implement an Irish rebellion. Lydia Field Emmet's great-grandfather Thomas Addis Emmet, Robert's older brother, emigrated to the United States after Robert's execution. Thomas Addis Emmet would later become the New York State Attorney General. His daughter Elizabeth Emmet (born 1794), Jane's great-aunt, would study portraiture under the direction of a steamboat designer and portrait artist named Thomas Fulton.[3] Both her older sisters Rosina Emmet Sherwood (1854–1948) and Lydia Field Emmet (1866–1952) would also become successful artists, as well as their first cousin Ellen Emmet "Bay" Rand (1876–1941).[4] Emmet de Glehn's brother, William LeRoy Emmet, was an accomplished engineer employed by General Electric;[5] a graduate of the United States Naval Academy at Annapolis, he was a pioneer in the areas of current electricity and power generation, best known for his work with steam turbines, mercury vapor, and electric ship propulsion.[5][6][7] Her brother Robert Temple Emmet was a West Point graduate, and Medal of Honor recipient.[8] Her brother Devereux Emmet was a pioneering American golf course architect who, according to one source, designed more than 150 courses worldwide. Her brother Christopher Temple Emmet was an noted attorney and sportsman.[9] She is the aunt of the prominent American playwright Robert Emmet Sherwood. 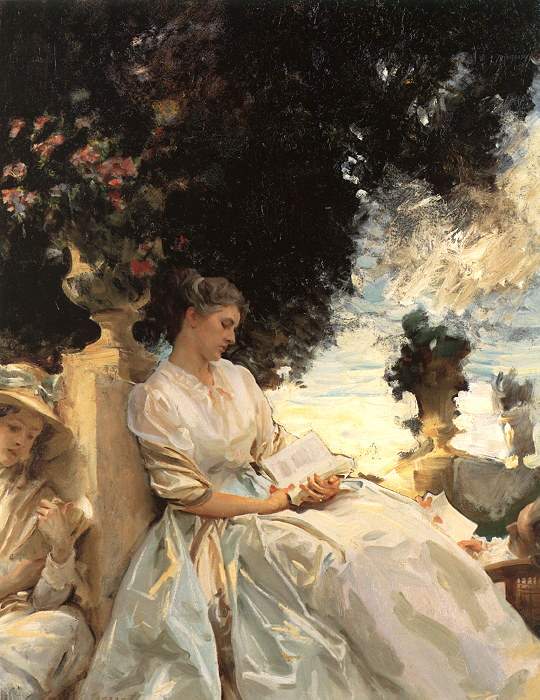 Jane Emmet's career began while studying at the New York's Art Students League and she later studied under Frederick William MacMonnies in Paris.[10] She then travelled in Europe to view the work of the Grand Masters and continue her studies.

Jane Emmet’s acquaintance with Robert Allerton and John Borie was first made in Paris in 1897, and it grew more intimate after all of them had returned to the USA. Later, when Dickie Borie moved from Philadelphia to New York City in 1902, there was no shortage of occasions for that pair to extend their friendship.

In January 1903, Wilfrid de Glehn went to the United States to help with the installation of the celebrated murals (monumental in scale), executed by Edwin Austin Abbey and John Singer Sargent for the Boston Public Library. Beside helping with the work in Boston, de Glehn also was eager to secure recognition (and future commissions) for himself in the United States, and with Sargent's help, he was given his chance: the prestigious Durand-Ruel gallery in Manhattan invited the British painter to exhibit his work that same spring. While the two men were in New York, consulting with the library's architects, they paid their respects at Bay Emmet's studio, where de Glehn was introduced to her cousin Jane. After Sargent returned to Europe in June, Bay invited de Glehn to stay on and spend the summer at her farm in Connecticut, where he could paint at his leisure; and during that time his acquaintance with Jane Erin Emmet depened into a romantic engagement, which they announced in September. The couple were married in New Rochelle in May 1904. The marriage took everyone by surprise. All branches of the Emmets "were stunned by the engagement, believing that the 30 years old Jane would remain single, as Lydia had." Sargent was equally nonplussed. "My God! What a trick to play to your sincere well wisher. I will up and marry in the attempt to be quits."

Following their marriage, the couple honeymooned in Cornwall, England, vacationed in Paris and Venice, and made a permanent home in Chelsea, London.[10] In England, Jane continued to draw and paint, exhibiting her work at the New English Art Club, the Royal Academy and the Royal Hibernian Academy. She worked mainly in the mediums of chalk and charcoal. The young couple became frequent travelling companions of the American painter John Singer Sargent, whom Jane Emmet de Glehn had met at performance of the dancer Carmencita in 1890,[11] and between 1905 and 1914 the trio often depicted each other in their works whilst travelling throughout Europe.[12] When World War I broke out, both Jane and Wilfrid joined the staff of a British hospital for French soldiers, Hôpital Temporaire d'Arc-en-Barrois, Haute-Marne, France in January 1915. On their return to England the following year, Wifrid was commissioned and seconded to the Front in Italy in 1917. After the war they returned to England, and Wilfrid held a solo exhibition at the Leicester Galleries and another solo show in New York in 1920. For the next decade the two would spend summers in Cornwall and winters in France.

Unlike her sisters, or her cousin Ellen Emmet Rand, or her husband, Jane Emmet de Glehn was not a prolific artist; after 1913 she generally exhibited her work alongside of that of her husband.[13] During the 1930s and 1940s Jane had a studio in New York. In 1940 she shared an exhibition with her sister Lydia Field Emmet, and like her sisters and cousin, preferred to mostly work in portraiture. After her husband's death in 1951, Jane Emmet de Glehn spent much of her time casually sketching her extended family and members of her social circle. She and Wilfrid had no children and she died in 1961.

In late April 2007, Arden Galleries in Manhattan held a family exhibit of five generations of the Emmet women's paintings. The 130 exhibits by 14 artists began with nine portraits by Jane Emmet de Glehn's great-aunt Elizabeth Emmet (a.k.a. Elizabeth Emmet LeRoy) and ended with nine sculptures by great-great-grandniece Julia Townsend, aged 22, and with two by Beulah Emmet, aged 18.[3]