Ellen Emmet Rand (née Ellen Gertrude Emmet; March 4, 1875 – December 18, 1941) was a painter and illustrator. In 1897 Mary Foote travelled to Paris, France, setting up a studio at 96 Boulevard Montparnasse with the American painters Ellen Emmet Rand, Lydia Field Emmet, Jane Erin Emmet, and Edith Leslie Emmet. These girls, whom she knew through New York relatives, were descendants of Thomas Addis and Robert Emmet, and were related throught he Temples to Henry James, who was a frequent guest at the studio.

Rand specialized in portraits, painting over 500 works during her career including portraits of President Franklin D. Roosevelt, artist Augustus Saint-Gaudens, and her cousins Henry James and William James. Rand studied at the Cowles Art School in Boston and the Art Students League in New York City and produced illustrations for Vogue Magazine and Harper's Weekly before traveling to England and then France to study with sculptor Frederick William MacMonnies. The William Benton Museum of Art at the University of Connecticut owns the largest collection of her painted works and the Archives & Special Collections at the Thomas J. Dodd Research Center at the University of Connecticut and the Archives of American Art within the Smithsonian Institution both have collections of her papers, photographs, and drawings. 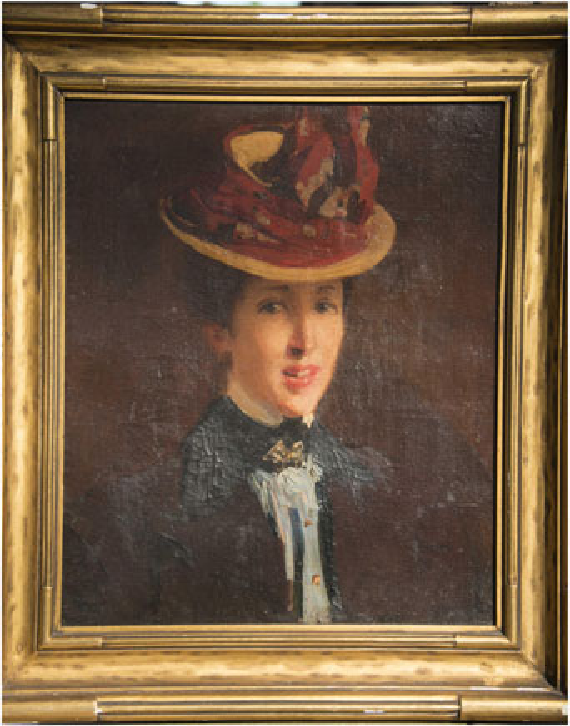 Portrait of Mary Foote (c. 1898) while a student in Paris and Giverny by Ellen Emmet Rand.

Rand studied with Dennis Miller Bunker and attended the Cowles Art School in Boston and then from 1889-93 registered for classes at the Art Students League of New York. Rand then attended the William Merritt Chase's Shinnecock Hills Summer School of Art.[3] Harry McVickar, editor of Vogue Magazine, saw her work in an exhibit for the summer school and asked her to illustrate for the magazine. She also illustrated for Harper's Weekly and Harper's Bazaar. In 1896 Rand travelled to England. She returned to the US in 1898 [4] and then to Paris to study with MacMonnies. Also in France and studying with MacMonnies was fellow American artist Mary Foote. Rand returned to New York City in 1900 and began her painting career in earnest. Rand focused her energy and output on painting portraits of corporate directors, society women, politicians, scientists, professors, lawyers and artists in the United States. Her portraits of the singer Susan Metcalfe Casals, her husband celloist Pablo Casals, and opera singer Charles Gilibert,[5] as well as her portraits of sculptor Saint-Gaudens and MacMonnies, all attest to her engagement with the arts in the first decade of the twentieth century.[6] In terms of politicians she claimed to have started a work on a portrait of President Theodore Roosevelt but she "had to give it up. 'It was ridiculous,' she recalled. 'He couldn't sit still—especially with children going in and out of the studio with snakes and spiders.'"[7] Rand did, however, complete three portraits of President Franklin Roosevelt, including his official presidential portrait. She was the second female artist commissioned to produce a presidential portrait. After his death, the portrait was moved to the Roosevelt estate and future FDR Library in Hyde Park, NY. It is unclear exactly why such a move was made, although there are letters exchanged between President Harry Truman and First Lady Eleanor Roosevelt concerning the transfer of the portrait. Another portrait was then used to replace the Rand work in the White House.[8] In 2004 the portrait was reported missing from the Library.[9] Rand also painted three U.S. Secretaries of State—John Milton Hay, Elihu Root, and Henry Lewis Stimson.

Bay Emmet returned to New York in 1900, and wrote to a friend that she had gone to the opera with a man fitting Robert Allerton's description, and that she had agreed to paint his portrait. In the late spring of the next year, she arrived in Chicago, where she completed an imposing canvas of Allerton's father (which for many years hung in the Board Room of the First National Bank, of which he was chairman), before coming to "The Farms," where her other commission, on a somewhat smaller scale, awaited her. A bond of possibly romantic friendship seemed in the offing. Also present, however, was John Borie, who was still drawing up plans for the as-yet-unfinished interior of the main house and attending to the construction of gardens and outbuildings on the estate. From a patchwork of letters that survive, it seems that the intrusion of a woman (and an aesthetic woman at that) profoundly disrupted relations between the two men, who now began to quarrel about details great and small. By summertime, Bay Emmet had retreated to New York, where she shuttled between her studio in Washington Square and a country retreat upstate, where more commissions were at hand, including one for a portrait of Emily Borie Ryerson, whose family had just built an enormous summer house (“Ringwood,” also designed by her brother) in Springfield Center, at the northern end of Lake Otsego. But the flare-up at “The Farms” followed Bay there and so did John Borie, who clearly was dividing his attention between the Allerton project and his sister’s estate, where extensive work on formal landscape gardens had begun now that the main house was finished.

By 1903, Bay had earned enough money to purchase a country retreat near Salisbury, Connecticut - Barack Matif Farm - where she could keep a stable and indulge her love of horseback riding. Just two years later, as a joint venture, Lydia Emmet and Susan Metcalfe built their own spacious summer house, "Strawberry Hill", just across the state line in Stockbridge, Massachusetts.

Work on “The Farms” was hardly completed when John Borie moved his office to New York; he continued to send blueprints back to Monticello as the estate gradually took shape, and it is likely that he himself would have had occasion to return, from time to time, to oversee new construction and the implementation of his designs. Whatever the source of the friction that had disturbed Borie’s relationship with his client during the first phases of construction, Robert Allerton nevertheless nevertheless retained the architect’s services for at least another dozen years. Travelling in the other direction, Allerton made regular stops in New York, as the port of departure for his (almost annual) trips abroad during the winter months, when he scoured the cities of Europe, the Middle East, and the Orient, acquiring new pieces for his ever-expanding collection of sculpture, furniture, and objets d'art. On one of these visits in 1905, he was invited to spend Thanksgiving up in Connecticut with the Emmets. Bur if there was any hopeful residuum of romance between Allerton and Bay, the young man's immediate plans would have cast a pall upon it, as he was about to embark on an around-the-world cruise with Charles Russell Hewlett, another bachelor-connoisseur, who would travel as his guest companion.

Bay Emmet married William Blanchard Rand, a country gentleman and horseman, 11 years her junior, in 1911 and had three sons.

In 1916 Ellen Emmet Rand is living at 15 West 67th Street; at this time, she also has a summer house at Hamlet Hill Farm, Salisbury, CT.

Rand was the first woman awarded a Beck Gold Medal by the Pennsylvania Academy of the Fine Arts.