Glyn Warren Philpot RA (5 October 1884 – 16 December 1937) was an English painter and sculptor, best known for his portraits of contemporary figures such as Siegfried Sassoon and Vladimir Rosing. Glyn Philpot’s Portrait of a Man in Black (1913) depicts Robert Allerton, his then lover, as does Duncan Grant’s painting of John Maynard Keynes (1908). These works show remarkable intimacy, and informed interpretations of the works are not possible if a viewer is ignorant of the sexual relations between the men. This is not a concession to prurient interests, but important art historical data similar to that commonly provided when the artist is known to have been heterosexual.

Philpot was born in Clapham, London, but the family moved to Herne in Kent shortly afterwards. Philpot grew up to be both a gay man,[1] and a practising Christian who converted to Roman Catholicism.

Philpot studied at the Lambeth School of Art (now known as City and Guilds of London Art School) in 1900 where he was taught by Philip Connard, and at the Académie Julian in Paris.[2]

Philpot first exhibited at the Royal Academy in 1904 and was elected to that establishment in 1923. He was a member of the International Society from 1913 and in that year he was awarded the gold medal at the Carnegie Institute, Pittsburgh.

He enjoyed a "comfortable income" from portraiture. He was reported as doing ten or twelve commissions a year, charging between £600 and £3,000 a time.[3] This enabled him to afford to travel to France, Italy, America and North Africa and continue to paint less commercially successful subject pictures. Following the Symbolist tradition his subject pictures reflected more personal concerns and contradictions: Philpot converted to Catholicism, yet his interest in the male nude and portraits of young men - thought to be friends, models and lovers - show his gradual acceptance and expression of his own homosexuality.[3] Some of these later works were considered controversial because of their homosexual imagery. Two pieces in particular - Guardian of the Flame and The Great Pan (1930) were withdrawn from the Royal Academy. This led to a loss of popularity which caused him financial hardship.[3] 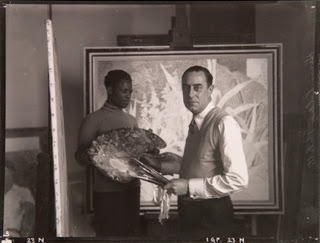 After their completion Philpot moved to Paris for a year, undertaking experimental paintings and absorbing the progressive work of Picasso and other modernist artists. A trip to Berlin in the autumn of 1931, where Philpot confronted both the shocking rise of Nazism and a sexual profligacy that encouraged him to be less secretive about his own homosexuality, further contributed to his belief in the need for change and a new openness in his art. His 1932 exhibition contained transparently homoerotic portraits of Karl Heinz Müller, a young German man who had been Philpot’s companion in Berlin, and Julien Zaïre, a Parisian cabaret artist. This mood is echoed in Oedipus, where Müller’s handsome features grace the face of the Greek hero.

Exhibitions have been held at The Tate Gallery (1938), The Ashmolean Museum, The National Portrait Gallery, of which he was a founder member in 1911, and Pallant House Gallery. Philpot was a member of the International Society of Sculptors, Painters and Gravers.[4]

After meeting Philpot at the Covent Garden opera house in the spring of 1913, Allerton invited him to stay with him later that summer. Philpot eagerly accepted the invitation, but when he disembarked from his steamer in New York that August, he was greeted not by his host but instead by some other mutual friends who informed him that Allerton was then entertaining John Borie at The Farms, as he had the previous summer. Miffed by this unexpected development, Philpot crudely villified his rival, whom he seemed already to know. "Borie - that beast," he ejaculated. But when Philpot finally made his way to Illinois, the painter had access to a magnificent studio where he finished, among other works, a striking canvas, The Man in Black - for which Robert Allerton seems to have posed in one of his many exotich costumes. In the letters, he wrote back to England (especially those addressed to his utterly devoted sister, Daisy), Philpot announced that he was extending his stay at Monticello and implicitly acknowledged his homosexual attraction to his generous host.

Philpot died from a stroke in December 1937; his funeral took place on 22 December 1937. Forbes committed suicide the following day.[6] He is buried in a pink granite tomb in St. Peter's Churchyard, Petersham.[7]