Jasper Fitzhardinge Kingscote (16 June 1917 - 29 May 1940) was a British aristocrat and military Lance corporal who served in the early stages of World War II.

Kingscote was born in Rochester, Kent, the son of the Australian Commander Robert Pringle Kingscote from Australia and Violet Anderton Greenwood from Fulham, London, daughter of John and Phoebe Anderton of Funtington House. His great-grandfather was Colonel Thomas Henry Kingscote (1799-1861), whose sons were Robert Kingscote (1830-1908) and Thomas Kingscote (1845-1935).

Jasper Fitzhardinge Kingscote attended Rugby School from 1931 to 1935 and was admitted as a pensioner at Trinity College, Cambridge, on 1 October 1936. He obtained a Bachelor of Arts in 1939.

On the outbreak of WWII he joined the Corps of Military Police (Field Security Wing) in September, and was promoted Lance-Corporal in October and Lance-Sergeant in February, 1940. He was sent to France with the B.E.F. He was killed in action on 29 May 1940.[2] It is believed that he was shot by a sniper. His body has never been recovered, but his name is on the Dunkirk memorial, column 147, Dunquerque, Departement du Nord, Nord-Pas-de-Calais, France.[3] The award of the military medal appeared in the London Gazette 11th July 1940, “The King has been graciously pleased to approve of the undermentioned awards for gallant and distinguished services in action in connection with recent operations”, the official recommendation for the Military Medal was as follows, “This NCO accompanied A/Sjt Macgillycuddy, assisted him in every way and covered him from the enemy whilst engaged in firing the oil. Throughout, he acted with great coolness and resource”. The recommendation is not dated but states served with the Intelligence Brigade section, HQ 1st Division 1st Corps. 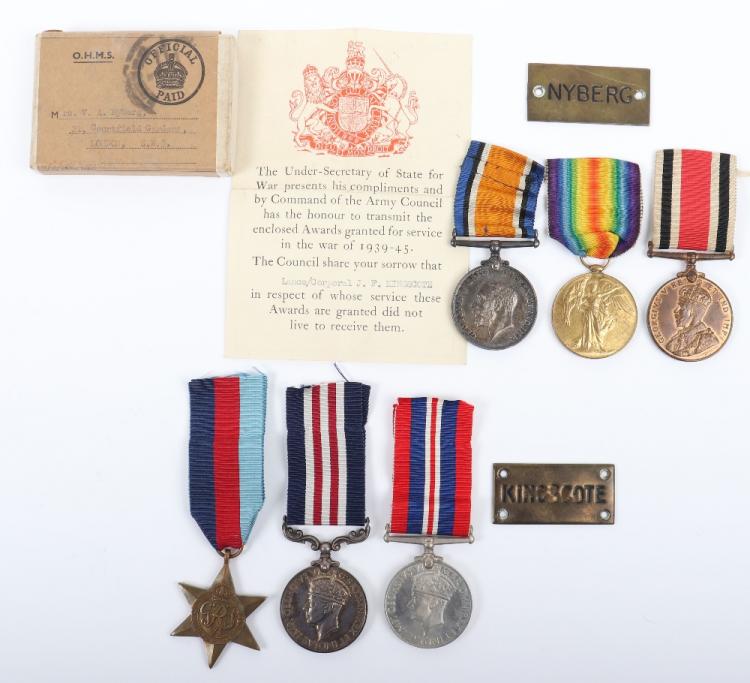 Kingscote has also a war memorial inside the Trinity College Chapel, Cambridge, Ante-Chapel west wall and is commemorated on his maternal grandparents' headstone in St Mary Churchyard, Funtington.