Duncan James Corrowr Grant (21 January 1885 – 8 May 1978) was a British painter and designer of textiles, pottery, theatre sets and costumes. He was a member of the Bloomsbury Group. Duncan Forbes in Lady Chatterley's Lover (1928) by D.H. Lawrence is modelled on Duncan Grant - "that dark-skinned taciturn Hamlet of a fellow with straight black hair and a weird Celtic conceit of himself."

Glyn Philpot’s Portrait of a Man in Black (1913) depicts Robert Allerton, his then lover, as does Duncan Grant’s painting of John Maynard Keynes (1908). These works show remarkable intimacy, and informed interpretations of the works are not possible if a viewer is ignorant of the sexual relations between the men. This is not a concession to prurient interests, but important art historical data similar to that commonly provided when the artist is known to have been heterosexual.

His father was Bartle Grant, a "poverty-stricken" major in the army, and much of his early childhood was spent in India and Burma. He was a grandson of Sir John Peter Grant, 12th Laird of Rothiemurchus, KCB, GCMG, sometime Lieutenant-Governor of Bengal.[1] Grant was also the first cousin twice removed of John Grant, 13th Earl of Dysart (b. 1946).

Grant's early affairs were exclusively homosexual. His lovers included his cousin, the writer Lytton Strachey, the future politician Arthur Hobhouse and the economist John Maynard Keynes, who at one time considered Grant the love of his life because of his good looks and the originality of his mind. Through Strachey, Grant became involved in the Bloomsbury Group, where he made many such great friends including Vanessa Bell. He would eventually live with Vanessa Bell who, though she was a married woman, fell deeply in love with him and, one night, succeeded in seducing him; Bell very much wanted a child by Grant, and she became pregnant in the spring of 1918. Although it is generally assumed that Grant's sexual relations with Bell ended in the months before Angelica was born (Christmas, 1918), they continued to live together for more than 40 years. During that time, their relationship was mainly domestic and creative; they often painted in the same studio together, praising and critiquing each other's work. 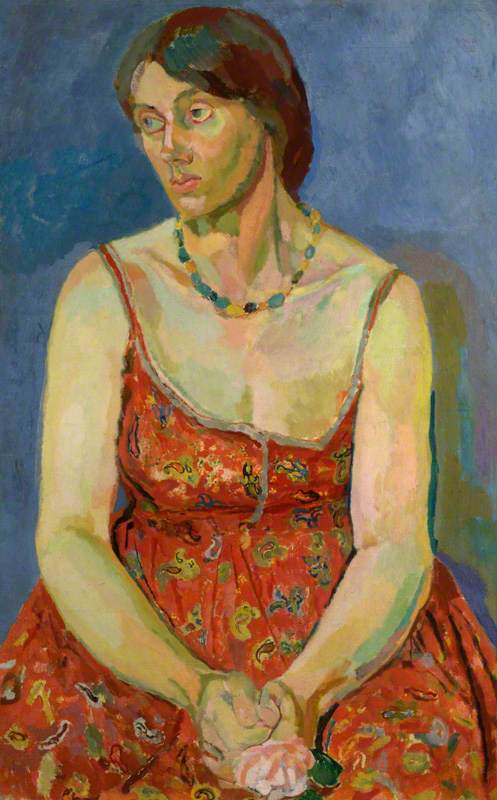 Living with Vanessa Bell was no impediment to Grant's relationships with men, either before or after Angelica was born. Angelica grew up believing that Vanessa's husband Clive Bell was her biological father; she bore his surname and his behaviour toward her never indicated otherwise. Duncan Grant and Vanessa Bell had formed an open relationship, although she herself apparently never had any further affairs. Duncan, in contrast, had many physical affairs and several serious relationships with other men, most notably David Garnett, who would one day marry Angelica and have four daughters with her, including Amaryllis Garnett. Grant's love and respect for Bell, however, kept him with her until her death in 1961.

Angelica wrote: "(Grant) was a homosexual with bisexual leanings".[10]

George Bergen was by then entangled artistically and emotionally with the Bloomsbury Group. Russian-born American artist George Bergen met the artist Duncan Grant in late 1929. Their friendship quickly evolved into an intense relationship and they spent a lot of time together at Charleston. His new relationship with George caused tension between Duncan and Vanessa Bell and in a letter to his former lover David Garnett, he confided his complex feelings: ‘I know perfectly well that George loves me … But why do I get into a state when he is tired and I am tired and therefore think that he has no feeling for me? And why does Nessa not believe that I love her as much as ever I did? … Why does she not realise that my love for George gives me more power to love her instead of less … The truth is I want them both … Only I know that sometimes Nessa suddenly feels that I give something to George that I don’t give to her.’ The friendship between Vanessa and Duncan was possibly the most important in both of their lives, and Vanessa was becoming increasingly worried that Duncan would leave and move to America with George. Eventually, their relationship came to an end as George began spending less and less time with Duncan, and more time visiting America. Promptly replying to letters was apparently not one of George’s strengths.

In Grant's later years, his lover, the poet Paul Roche, whom he had known since 1946, took care of him and enabled Grant to maintain his accustomed way of life at Charleston for many years. Grant and Roche's relationship was strong and lasted even during Roche's marriage and five children he had by the late 1950s. Roche was made co-heir of Grant's estate.

Duncan visited New York in the 1960s with Roche and he rekindled his friendship with George. A few years later, Duncan and Vanessa’s daughter Angelica visited New York and fell in love with George. When she told Duncan how she felt, he wrote back, ‘Of course I am deeply interested to hear of your feelings for George. I only hope his complete inability to write letters may not make things difficult for you.’ Their relationship lasted a year, and although they lived together for a time, George and Angelica eventually separated.