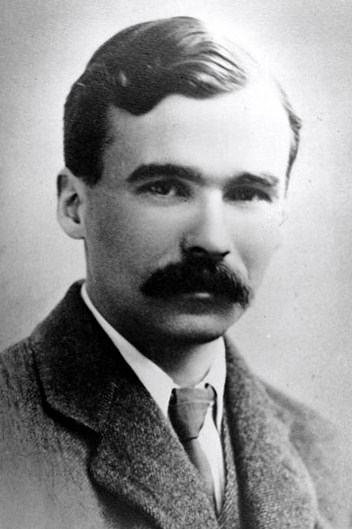 George Sainton Kaye Butterworth, MC (12 July 1885 – 5 August 1916) was an English composer who was best known for the orchestral idyll The Banks of Green Willow and his song settings of A. E. Housman's poems from A Shropshire Lad. In the wake of the posthumous denigration of Pyotr Ilyich Tchaikovsky, more or less contemporaneous with the disgrace of Oscar Wilde in 1895, certain English composers developed a keepsake mentality, frustrated yet potent, that came to characterize a generations music. Three representatives may be considered: Roger Quilter, John Ireland, and George Butterworth. Butterworth was probably homosexual, Ireland and Quitter certainly were. None of the three found a longterm or stable sexual partner. All of them excelled at composing songs, inscribing fulfillment in the perfection of the small-scale and containable while counterbalancing that with the powerful erotic yearning of the English lyric poetry they chose to set to music.

Butterworth was born in Paddington, London.[1] Soon after his birth, his family moved to York so that his father Sir Alexander Kaye Butterworth could take up an appointment as general manager of the North Eastern Railway, which was based there. [2] Their home was at Riseholme, a house on Driffield Terrace, which later became part of the Mount School. In 2016, the centenary year of his death on the Somme, the York Civic Trust unveiled a blue plaque in his memory, at College House, Driffield Terrace, part of the Mount School.

George received his first music lessons from his mother, who was a singer, and he began composing at an early age.[2] As a young boy, he played the organ for services in the chapel of his preparatory school, Aysgarth School, before gaining a scholarship to Eton College.[2][3] He showed early musical promise at Eton, a "Barcarolle" for orchestra being played during his time there (it is long since lost).[4]

Butterworth then went up to Trinity College, Oxford, where he became more focused on music, becoming President of the University Music Club.[2] He also made friends with the folk song collector Cecil Sharp; the composer and folk song enthusiast Ralph Vaughan Williams; the future Director of the Royal College of Music, Hugh Allen; and a baritone and future conductor, Adrian Boult. Butterworth and Vaughan Williams made several trips into the English countryside to collect folk songs (Butterworth collected over 450 himself, many in Sussex in 1907, and sometimes using a phonograph) and the compositions of both were strongly influenced by what they collected.[2] Butterworth was also an expert folk dancer, being particularly keen in the art of morris dancing.[2] He was employed for a while by the English Folk Dance and Song Society (of which he was a founder member in 1906) as a professional morris dancer, and was a member of the Demonstration Team.[5]

Upon leaving Oxford, Butterworth began a career in music, writing criticism for The Times, composing, and teaching at Radley College, Oxfordshire.[2] He also briefly studied piano and organ at the Royal College of Music, where he worked with Hubert Parry among others, though he stayed less than a year as the academic life was not for him.[2]

When the manuscript for that piece was lost (having been sent to Germany, either to the conductor Fritz Busch or for engraving, just before the outbreak of war), Butterworth, together with Geoffrey Toye and the critic Edward J. Dent, helped Vaughan Williams reconstruct the work.[7] Vaughan Williams dedicated the piece to Butterworth's memory after his death.

At the outbreak of the First World War, Butterworth, together with several of his friends, including Geoffrey Toye and R. O. Morris, joined the British Army as a private in the Duke of Cornwall's Light Infantry, but he soon accepted a commission as a subaltern (2nd Lieutenant) in the 13th Battalion Durham Light Infantry, and he was later temporarily promoted to lieutenant.[2] He was known as G. S. Kaye-Butterworth in the Army.[2] Butterworth's letters are full of admiration for the ordinary miners of County Durham who served in his platoon. As part of 23rd Division, the 13th DLI was sent into action to capture the western approaches of the village of Contalmaison on The Somme. Butterworth and his men succeeded in capturing a series of trenches near Pozières on 16–17 July 1916, the traces of which can still be found within a small wood. Butterworth was slightly wounded in the action. For his action Temporary Lt. George Butterworth, aged 31, was awarded the Military Cross, gazetted 25 August 1916, though he did not live to receive it.[8]

The Battle of the Somme was now entering its most intense phase. On 4 August, 23rd Division was ordered to attack a communications trench known as Munster Alley that was in German hands. The soldiers dug an assault trench and named it 'Butterworth Trench' in their officer's honour. In desperate fighting during the night of 4–5 August, and despite friendly fire from Australian artillery, Butterworth and his miners captured and held on to Munster Alley, albeit with heavy losses. At 04:45 on 5 August, amid frantic German attempts to recapture the position, Butterworth was shot through the head by a sniper. His body was hastily buried by his men in the side of the trench, but was never recovered for formal reburial following the fierce bombardments of the final two years of conflict.

When his brigade commander, Brigadier General Page Croft, wrote to Butterworth's father to inform him of his death, it transpired that he had not known that his son had been awarded the Military Cross.[2] Similarly, the brigadier was astonished to learn that Butterworth had been one of the most promising English composers of his generation.[2] Brigadier Croft wrote that Butterworth was "A brilliant musician in times of peace, and an equally brilliant soldier in times of stress."[9]

There is confusion about exactly what award(s) Butterworth received. It is said that he won the MC twice, but this is incorrect. This misunderstanding may have arisen because Butterworth's bravery was regularly in evidence during the Somme campaign. Firstly, he was mentioned in despatches early in July, and was then recommended for the MC "for conspicuous gallantry in action" on 9 July at Bailiff Wood, then again – successfully – "for commanding his company with great ability and coolness" when wounded on 16–17 July. Brigadier Page-Croft also mentioned to Butterworth's father that he had 'won' the medal again on the night he died. However, the Military Cross was not awarded posthumously at the time, and so he could never have been awarded it twice.[10]

Butterworth's body was never recovered (although his unidentified remains may well lie at nearby Pozières Memorial, a Commonwealth War Graves Commission cemetery), and his name appears on the Thiepval Memorial.[2] George Butterworth's The Banks of Green Willow has become synonymous for some with the sacrifice of his generation and has been seen by some as an anthem for all 'Unknown Soldiers'. Sir Alexander Butterworth erected a plaque at St Mary's Priory Church, Deerhurst, Gloucestershire in memory of his son and of his nephew, Hugh, who died at Loos in 1915. (The Rev. George Butterworth, the composer's grandfather, had been vicar of St Mary's in the previous century.[2]) Sir Alexander also arranged the printing in 1918 of a memorial volume in his son's memory. Almost all Butterworth's manuscripts were left to Vaughan Williams, after whose death Ursula Vaughan Williams lodged the original works in the Bodleian, Oxford, and the folk song collection with the EFDSS.[2]