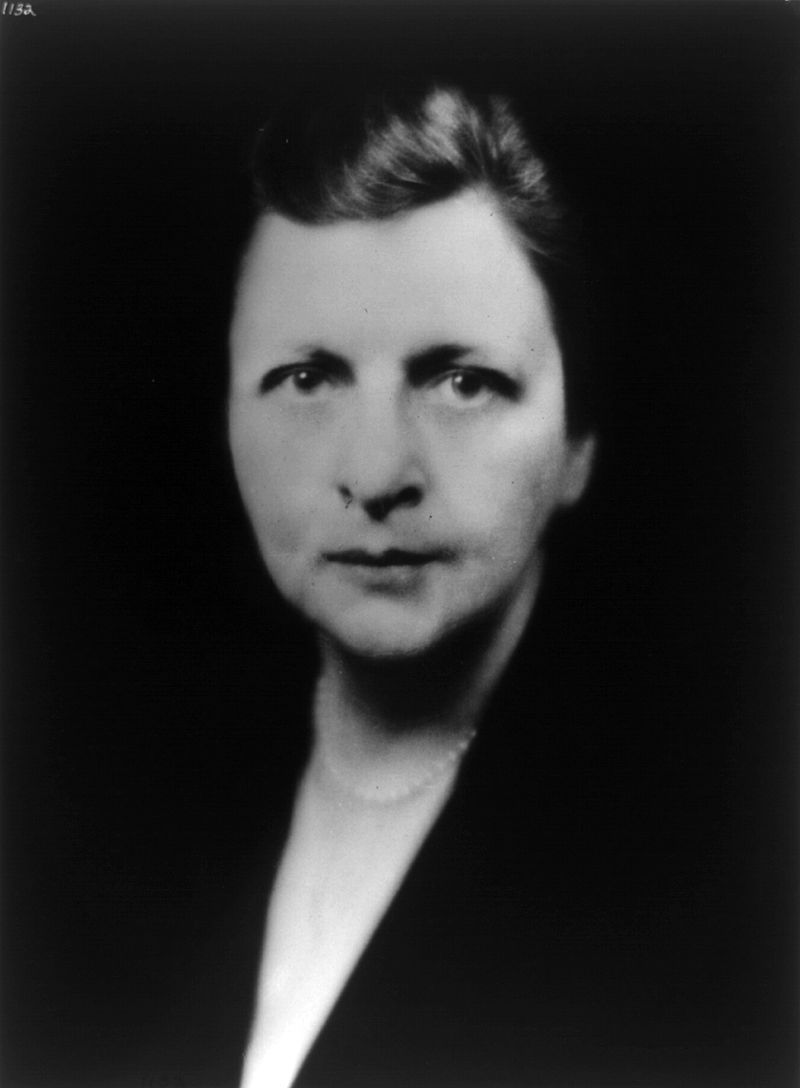 Frances Perkins (born Fannie Coralie Perkins; April 10, 1880[1][2] – May 14, 1965) was an American sociologist and workers-rights advocate who served as the U.S. Secretary of Labor from 1933 to 1945, the longest serving in that position, and the first woman appointed to the U.S. Cabinet. A few writers have speculated that Perkins had a romantic relationship with her friend Mary Harriman Rumsey, founder of the Junior League: the women lived together in Washington, D.C., from 1922 until Rumsey's death in 1934.[26][27] Frances Perkins, together with Eleanor Roosevelt and another indomitable political activist, Molly (Mary) Dewson, were the triumvirate at the centre of the influential New Deal political sisterhood.

Fannie Coralie Perkins was born in Boston, Massachusetts, to Susan Ella Bean (1849–1927) and Frederick William Perkins (1844–1916), the owner of a stationer's business (both of her parents originally were from Maine).[4] Fannie Perkins had one sister, Ethel Perkins Harrington (1884–1965).[5] The family could trace their roots to colonial America, and the women had a tradition of work in education.[6] She spent much of her childhood in Worcester, Massachusetts. Frederick loved Greek literature and passed that love on to Fannie.[5]

Perkins attended the Classical High School in Worcester. She graduated from Mount Holyoke College with a Bachelor of Arts degree in chemistry and physics in 1902. While attending Mount Holyoke, Perkins discovered progressive politics and the suffrage movement.[7] She was also named class president.[5] One of her professors was Annah May Soule, who assigned students to tour a factory to study working conditions;[8] Perkins recalled Soule's course as an important influence.[9]

After college, she held a variety of teaching positions, including a position teaching chemistry from 1904 to 1906 at Ferry Hall School (now Lake Forest Academy), an all girls school in Lake Forest, Illinois.[9] In Chicago, she volunteered at settlement houses, including Hull House where she worked with Jane Addams.[9][5] She changed her name from Fannie to Frances[10] when she joined the Episcopal church in 1905.[11] In 1907, she moved to Philadelphia and enrolled at University of Pennsylvania's Wharton School to learn economics.[12] After two years in Philadelphia, Perkins moved to Greenwich Village, where she attended Columbia University and became active in the suffrage movement.[12] In support of the suffrage movement, Perkins attended protests and meetings and advocated for the cause on street corners.[12] She obtained a master's degree in political science from Columbia in 1910.[13]

She achieved statewide prominence as head of the New York office of the National Consumers League in 1910[14] and lobbied with vigor for better working hours and conditions. Perkins also taught as a professor of sociology at Adelphi College.[15] The next year, she witnessed the tragic Triangle Shirtwaist Factory fire, a pivotal event in her life.[16]

As a loyal supporter of her friend, Franklin D. Roosevelt (FDR), she helped pull the labor movement into the New Deal coalition. She and Interior Secretary Harold L. Ickes were the only original members of the Roosevelt cabinet to remain in office for his entire presidency.

During her term as Secretary of Labor, Perkins executed many aspects of the New Deal, including the Civilian Conservation Corps, the Public Works Administration and its successor the Federal Works Agency, and the labor portion of the National Industrial Recovery Act. With the Social Security Act she established unemployment benefits, pensions for the many uncovered elderly Americans, and welfare for the poorest Americans. She pushed to reduce workplace accidents and helped craft laws against child labor. Through the Fair Labor Standards Act, she established the first minimum wage and overtime laws for American workers, and defined the standard forty-hour workweek. She formed governmental policy for working with labor unions and helped to alleviate strikes by way of the United States Conciliation Service. Perkins dealt with many labor questions during World War II, when skilled labor was vital and women were moving into formerly male jobs.[3] She was the subject of the documentary film "Summoned" (2020).

In 1913, Perkins married New York economist Paul Caldwell Wilson.[6] She kept her maiden name because she did not want her activities in Albany to affect her husband, then the secretary to the New York City mayor.[6] She defended her right to keep her maiden name in court.[6] The couple had a daughter, Susanna, born in December 1916.[22] Less than two years later, Wilson began to show signs of mental illness.[22] He would be frequently institutionalized for mental illness for the remainder of their marriage.[23] Perkins had retreated from public life following the birth of her daughter, but returned after her husband's illness in order to provide for her family.[24][17] According to biographer Kirstin Downey, Susanna displayed "manic-depressive symptoms" as well.[25]