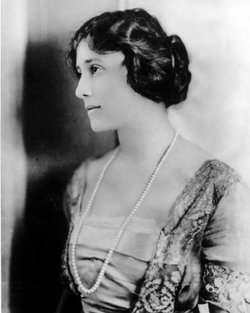 Mary Harriman Rumsey (November 17, 1881 – December 18, 1934) was the founder of The Junior League for the Promotion of Settlement Movements, later known as the Junior League of the City of New York of the Association of Junior Leagues International Inc. During a period between 1922 and 1934, she lived and shared an intimate relationship with United States Secretary of Labor Frances Perkins.[12][13] Mary is credited with assisting Perkins with the enactment of the Social Security Act. In 2015 Rumsey was posthumously inducted into the National Women's Hall of Fame.[1]

Mary attended Barnard College, where she specialized in sociology and was a member of Kappa Kappa Gamma.

Inspired by a lecture on the settlement movement, Mary, along with several friends, began volunteering at the College Settlement on Rivington Street in New York City's Lower East Side, a large immigrant enclave. Through her work at the College Settlement, Mary became convinced that there was more she could do to help others. Subsequently, Mary and a group of 80 debutantes established the Junior League for the Promotion of Settlement Movements in 1901, while she was still a student at Barnard College. The purpose of the Junior League would be to unite interested debutantes in joining the Settlement Movement in New York City.

Realizing their lack of experience in dealing with the issues that faced people seeking help at the settlement house, Mary and League leaders brought together experts on the Settlement Movement to provide lectures and instruction to Junior League members. With better preparation came greater engagement leading to increased interest in membership by women notable in New York society; members would come to include Eleanor Roosevelt, Dorothy Whitney Straight and Ruth Draper.

As word of the work of the young Junior League women in New York spread, women throughout the country and beyond formed Junior Leagues in their communities. In time, Leagues would expand their efforts beyond settlement house work to respond to the social, health and educational issues of their respective communities. In 1921, approximately 30 Leagues banded together to form the Association of Junior Leagues of America to provide support to one another. With the creation of the Association, it was Mary who insisted that although it was important for all Leagues to learn from one another and share best practices, each League was ultimately beholden to its respective community and should thus function to serve that community's needs.

As the 20th century progressed, more Junior Leagues were formed throughout the United States, Canada, Mexico and the United Kingdom. Now known as the Association of Junior Leagues International Inc. (AJLI), the organization encompasses 292 member Leagues, with over 160,000 members committed to continuing the legacy established by its founder.

Despite her inexperience, Mary's work with farming cooperatives and belief in the power of cooperation would come to be her greatest asset. Mary would promote the formation of consumer groups across the nation and encourage these groups to report their grievances to her office.

Mary Rumsey's legacy to New Deal reforms would be continued by her younger brother, W. Averell Harriman. Averell was encouraged by his older sister to leave his finance job and join her and their friends, the Roosevelts, to advance the goals of the New Deal. Averell joined the NRA, marking the beginning of his political career.

In 1910, Mary married sculptor and polo player Charles Cary Rumsey (1879–1922), shortly after the death of her father on September 9, 1909. Rumsey had been working at Arden House, creating one of the principal fireplace surrounds, as well as other decorative sculpture. By all accounts, the two had a happy marriage.[8] Together they had a daughter and two sons.

Charles was killed in a car accident in 1922.[11] Mary died in 1934 as a result of a horse riding accident which occurred while on a hunt near Middleburg, Virginia.[14]