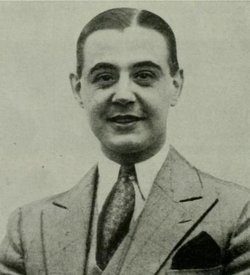 Serge Mdivani (born February 17, 1903 in Tbilisi, Georgia; † March 15, 1936 in Florida) was one of the five siblings known as Marrying Mdivanis. As the husband of the film star Pola Negri, he became world famous in 1927.

Serge Mdivani was the eldest son of Zakhari Mdivani, a general of Tsar Nicholas II, and his wife Elisabeth Viktorovna Sobolevska. Other family members were: Nina Mdivani (1901-1987) David Mdivani (1904-1984) Roussadana Mdivani (1905-1938) Alexis Mdivani (1908-1935). In 1914, the family moved from Tbilisi to Batumi, where Zakhari Mdivani had been appointed governor of the city by Nicholas II. Those who were interested in oil business there had to make representations to General Mdivani. As a result, an American business traveler, Zenas Marshall Crane, came into contact with the family in 1919.[1] He took Serge and David Mdivani to the United States, where they attended a high school with boarding school in Andover, Massachusetts.[2] After graduating from high school, the brothers traveled briefly to Paris, where the family had settled in 1921 after fleeing Constantinople. Since her exile, Elisabeth Mdivani had given herself and her daughters princess titles, the sons had called princes, which served them as entreé in upscale social circles.[3] After their mother died unexpectedly, Serge and David returned to the United States in 1923. They took different jobs, but planned to enter the oil business. From 1924 Serge is said to have worked as secretary for The Georgian Exploration Co. Inc.[4] Through David, who now lived in Hollywood, Serge Mdivani met the Polish actress Pola Negri. She had come to the United States in 1923 and was signed to Paramount. Pola Negri had successfully reunited David Mdivani with her colleague Mae Murray and was a groomswoman when the couple married in June 1926. Pola himself wanted to marry Rudolph Valentino, but he died completely unexpectedly. At the same time, her career in the USA came to an end with the sound film, because her Polish accent did not reach the audience. Serge Mdivani and Pola Negri became a couple; in April 1927, they made the crossing to France with great press swirl, where they married on 14 May 1927. Pola Negri owned a castle there, the Chateau Reuil Seraincourt, which she had bought for herself and Valentino two years earlier. The love life of "Prince" and "Princess" Mdivani was extensively reported in the European and American press. The reporters did not escape the fact that the marital happiness was short-lived. Due to the stock market crash of 1929, a large part of Pola Negris' extensive fortune was lost. In addition, Serge Mdivani began a relationship with the opera singer Mary McCormic, after which Pola filed for divorce. At the court hearing, reconciliation came again, which did not last long. The couple eventually divorced, and Serge married Mary McCormic on April 27, 1931. He resumed his plans from the oil business and founded the Pacific Shore Oil Company with David Mdivani. They successfully sold shares in the company to private investors, with their wives – Mary McCormic and David's wife Mae Murray – mediating many clients and also being shareholders themselves. A few years later, both marriages were about to end, and the ex-wives went on trial against the brothers in 1933. They were accused of embezzling more than 30,000 dollars while the other investors ran out of money. Finally, in October 1934, the charge of theft was dropped. Instead, Serge and David Mdivani were charged with conspiracy to commit a criminal act and fined at the end of the trial.[5] On January 14, 1936, Serge married for the third time to Louise Astor Van Alen, who had been the wife of his younger brother Alexis Mdivani from 1931 to 1932.[6] Only a few weeks later, on March 16, 1936, Serge Mdivani died at the age of 33 in a polo match. During a tournament in Palm Beach, he fell out of the saddle and was hit in the head by the hooves of his pony. He died of his head injury while still on the field.[7] He was buried in Berkeley Memorial Cemetery, Rhode Island, USA.[8]

The wedding of Serge Mdivani and Pola Negri